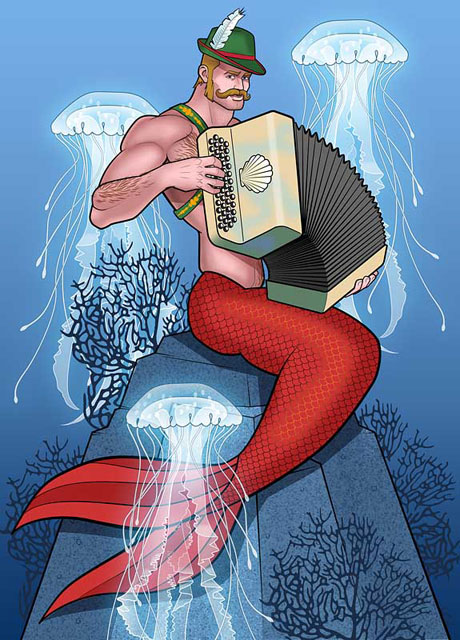 The TOFF was founded in 1984 by Durk Dehner and Touko Laaksonen — AKA Tom of Finland, the iconic illustrator of homoerotic fetishism whose impact on gay culture began in the 50’s. Tom’s influence eventually expanded to include significant mainstream art world acceptance and, arguably, a hand in reconfiguring our entire society’s understanding of the visual symbolism of masculinity.

Other artists’ work operate in the grey area between the mainstream and the underground — Rob Clarke’s leather mermen and St. Sebastian unicorn pony-boys could easily be tweaked into something from the oeuvres of James Gobel or The Reverend Ethan Acres; Richard Johnson’s paintings are washy, archetypal updates of painting’s Paleolithic origins; Michael Kirwan’s mannered cartoon grotesqueries resemble something Mike Kelley might have done on his day off. 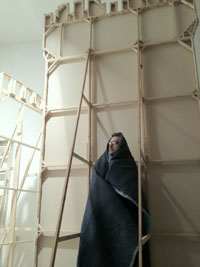 Doug Harvey is an artist, writer and critic, independent curator, and educator who lives and works in Los Angeles. He has dual openings in Chinatown this weekend (Saturday, Sept. 29, 2012) as part of Artmageddon – a new chapter of his collage novel The Cybernetic Angel in The small Loop Show curated by China Adams at FOCA, and a rare screening of his moldy slide collection in Translucent Travels at Automota. He recently participated in the group show WinnePig at Antebellum, LA’s premier fetish gallery. His other activities may be monitored online at www.dougharvey.blogspot.com and www.dougharvey.la.