La Brea Avenue in West Hollywood is undergoing a transformation. Abuzz with construction, five projects are happening within a five-block stretch of La Brea between Fountain Avenue and Willoughby Avenue.

When all five projects are completed, they will add 582 residential units and 84,400 square feet of retail space to the area, plus countless numbers of cars to the already perpetually congested street. In fact, West Hollywood Patch readers in May voted the La Brea-Santa Monica Boulevard intersection the “worst intersection” in town.

Here’s a rundown of the five projects – four will be new buildings and the other a refurbishment of an existing building (with a smaller new building being added). 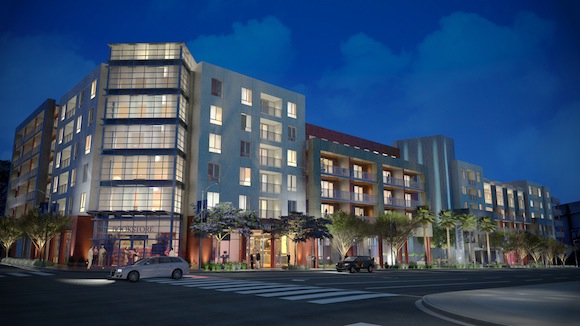 The old Jon’s supermarket, a longtime favorite of the Russian community living on West Hollywood’s eastside, closed its doors in May 2011 with demolition of the building following shortly thereafter.

The Monarch Group is building a six-story, mixed-use project with 18,000 square feet of retail space and 187 apartments, 38 of which are affordable units. According to Jeffrey Seymour, a spokesperson for the project, the estimated completion date is December 2013.

Seymour reports that the two-level underground parking is completed and construction crew members are now parking inside the structure, something that has come as a relief to residents competing for parking on nearby streets. 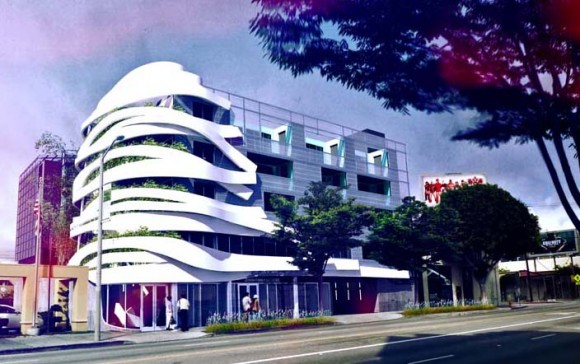 Immediately north of the McDonalds and just a few doors south of Lexington Avenue, the West Hollywood Community Housing Corporation (WHCHC) is constructing the Courtyard at La Brea, a five-story 32-unit building of affordable housing. Each unit is one-bedroom and will be approximately 600 square-feet, reports Robin Conerly, the executive director of the Housing Corp.

The site previously housed the Discover Green showroom (specialized in flooring) in a single-story building that was demolished. The Courtyard consists of two five-story towers surrounding a courtyard open on the southern end (hence the name). Construction began in June 2012 with an estimated completion date of September 2013.

Residents of the new affordable building will be determined by a lottery. Applications for that lottery will be available starting in June 2013, available on the WHCHC website, in the Plummer Park Community Center and at Jewish Family Services. The project is being paid for through federal HUD (Housing and Urban Development) funds and the City of West Hollywood’s Affordable Housing Trust Fund. 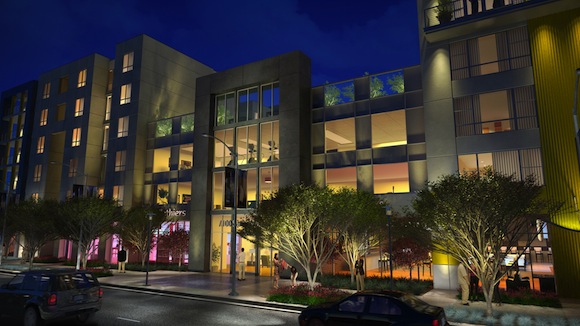 The former Carl’s Jr. location on the northwest corner of the busy intersection was a magnet for fast-food lovers and, reportedly, drug deals. But the building came down last fall as construction started on a six-story, mixed-use project with 12,800 square-feet of retail space and 184 apartments, 36 of which will be affordable units.

The Monarch Group is developing this project, scheduled for completion in March 2014, according to Seymour. The two-level underground parking is nearly complete with construction crews scheduled to start parking there starting in late January/early February 2013. 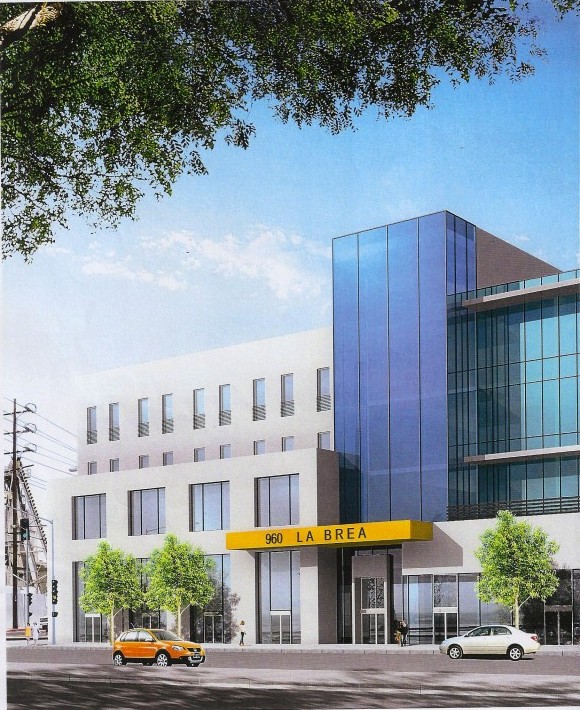 This abandoned 44,500 square-foot industrial building on the southeast corner of the intersection (diagonally across from the Best Buy) dates back to 1933, having housed many different businesses over the years, including an auto dealership, an art gallery and a framing studio.

Additionally, the adjacent single-story building immediately to the south was demolished to make way for a new building consisting of 8,600 square-feet of ground-floor retail and 134 parking spaces on three levels above the retail space.

Renovations started in December 2011 and should be completed by March 2013, said Ben Soleimani, the president of BMB Investment Corp, which is developing the project.

No tenants have been signed yet, but Soleimani hopes to rent the office space to creative and/or production companies.

BMB also owns properties on Melrose Avenue between La Cienega and San Vicente boulevards. Included in those Melrose properties is the proposed new Restoration Hardware showroom building at Westmount Drive and Melrose (across from Urth Café). 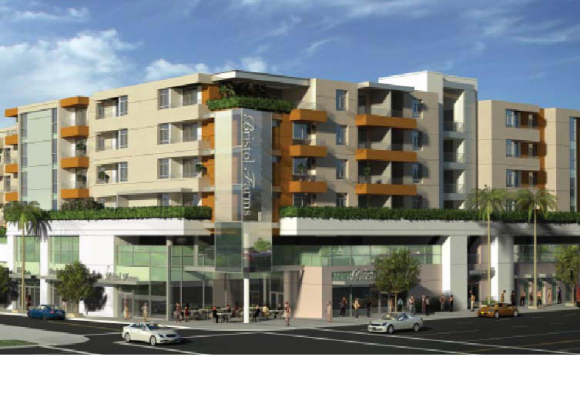 The most controversial of the five developments, this project on the northwest corner of the intersection is known as the La Brea Gateway (not to be confused with the Gateway Center, home of the Target store, a block to the north).

The former home of the KCOP-Channel 13 studios, the building was abandoned in 2003 when KCOP moved to the Paramount Studios lot. In the years since then, the facility has been used occasionally by production companies, but mostly served as a unofficial “hotel” for transients and homeless.

The Martin Group plans to build a four-story, mixed-use project, consisting of 33,500 square-feet of ground floor retail and 179 residential units (10 percent which will be affordable units), plus two levels of subterranean parking.

While the existing buildings on the property were demolished over the summer, a start date for construction is not known as a spokesperson for the project declined to be interviewed.

A lawsuit over the project ended in early December according to Lucille Saunders of the La Brea-Willoughby Coalition, which fought to downsize the project. As a result, La Brea Gateway, which the Los Angeles City Council approved in 2009, was reduced in height from seven stories (75 feet height) to four stories (48 feet height) and in density from 219 units to 179 units.

A Martin Group bulletin reports that Sprouts Farmers Market, an upscale grocery store similar to Whole Foods, will be a tenant.

Vance, you’re crazy. It’s almost identical to the renderings but actually BETTER.
Get rid of McDonalds if you want to improve things even more.

The photo on this blog doesn’t do it justice. I know this is La Brea, but I thought we were trying to raise the land value not lower it. It’s a complete disaster, and the crappy white siding is already detoriating, not to mention TACKY. The building isn’t even complete yet?!

Someone needs to do something about this architect/developer. This is utter garbage.

I am the only candidate for WeHo City Council that actually has a plan to solve congestion with my proposal for a privately funded Personal Rapid Transit (PRT) network. These car sized pods will be built above our city streets. PRT companies will pay 5% of revenue to the right-of-way holder (WeHo) for the privilege of giving residents freedom from congestion. They will travel 30-40mph non-stop, using 1/10th energy of a car, powered by solar panels on top of the rails. The revenue generated from the PRT can be used to increase rent subsidies, assist our neighbors with HIV, and… Read more »

take a look at this “under the radar” project to add to the eastside mess of new developments!!!!! http://la.curbed.com/archives/2012/12/mixeduse_fakeout_with_formosa_south_at_the_lot_offices.php

Chloe Ross
Reply to  Me

Actually I was at the meeting for the “Lot” building – as an observer. Last year – so it is a quiet fait accompli from before the deeper madness began. Here is another fine example of mediocrity in design. And CH is all over the map trying to be civic chameleons when it comes to historic preservation and new buildings.Imagine a color changing lizard on a piece of plaid because that’s how I see them when they flip from their opposing stands on what is good to stay and what is good to go and what is esthetic. The La… Read more »

That must explain why Manhattan, central London, and central Paris all had such terrible “demises” eh?

FYI another anonymous commentor: New York is another Disneyland and quite a bit larger than WeHo. Central London is a mess in terms of traffic and have you ever driven in Paris? Having lived and/or worked in all three cities I speak from experience not conjecture. And further to this: London is part of a Constitutional Monarchy, France is a socialist country and Manhattan is not built for cars and each city has excellent public transport. Sad little WeHo, like the cheese, stands alone.

cemex is in los angeles, not weho, and they will be moving, trust me

@ TMS,
I DO live and own property on the eastside, in this neighborhood and I did. Go to. Meetings about Movietown Plaza. When I asked Darren Embry why Casden would not consider lowering the 2 ten story buildings he told me, “we already have, we wanted to build them 14 stories…”
As for west siders commenting, personally, I comment on things happening all over our city, never thinking it’s them against me…..go figure.

@Todd Bianco
Let’s also keep in mind that the fabulous….(soon to be NOT so fabulous), The LOT (Pickford-Fairbanks Movie Studios) are also in the midst of being transformed. So much for potential historic designation, but I digress…..The owner plans on building as high as 6 stories on Santa Monica Blvd. and another glass box is already in the works on the Formosa side.

TMS, you’re getting what you wanted. Why are you so angry?
You should be happy.
I live on Hayworth. Not quite the west side.
And, look, we agree on 960 La Brea….

Unfortunately Cemex is going nowhere. It’s one of the biggest tax generators for the city so there is no pressure for them to relocate.

And for the record, I think what is being done to Romaine/La Brea is a huge mistake. While no one would ever want to live there because of Cemex, the owner had an opportunity to bring back an amazing building. From these pictures it looks like a medical building in the suburbs.

I’m hopeful that that is an old picture. Here’s a link to what was supposed to be done….not perfect, but not as bad as what’s shown here.