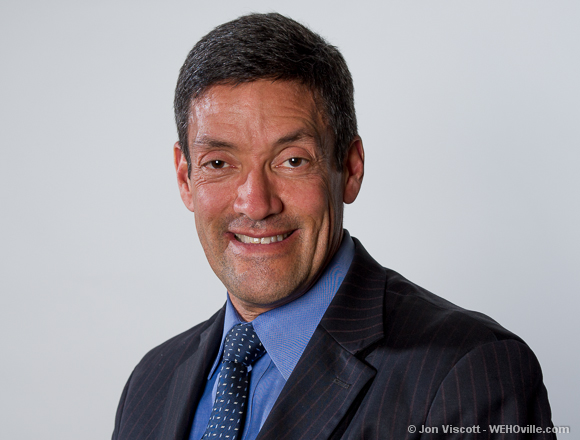 A native Angelino, John Duran officially took up residence in West Hollywood in the early 1990s, after spending much of his youth as a Boystown activist and clubgoer.

Elected to the West Hollywood City Council in 2001, Duran is one of a handful of openly HIV-positive elected officials in the nation. A criminal defense attorney, Duran got his law degree from Western State University, his BA in business administration from Cal State Long Beach. Duran also sings in the LA Gay Men’s Chorus.

Answer: The language in this question is poorly phrased. The city does not tear down any buildings other than the buildings that the city owns. Almost all buildings in the city are privately owned. The city must strike a careful balance between the constitutional protections provided to private property owners versus the city’s desire to preserve historic buildings.

The city adopted a historic preservation ordinance in 1989 and has designated 82 buildings citywide. Our historic preservation commission carefully analyzes each nominated property and then determines whether the property should be designated. Some property owners were demolishing apartment buildings to build condos. Many of those demolitions did not increase density at all, but rather replaced old apartments with new condos. That is why I authored the interim zoning ordinance, which stopped the demolition of apartment building in neighborhoods until the city updated its general plan.

My ordinance stopped the wrecking balls and displacement of renters and preserved many apartment buildings in the city.

West Hollywood did have extraordinary growth during the 1970s and 1980s before cityhood occurred. Many of our residents now live in the apartment buildings and condos that were constructed during this past growth period. We recently adopted a general plan that encourages mixed-use development along our commercial corridors and major intersections and discourages new development in residential neighborhoods. Our community decided that we want economic diversity and affordable housing.  We have achieved that primarily through our rent control ordinance.

However, when Sacramento took away our ability to control rents after vacancies occur, we have been seeing many apartments in the city rising to market levels that are not affordable to young people, the disabled or senior citizens.

Therefore, our city requires that any new development set aside 20 percent of the units as affordable housing. Many of these units are utilized by senior citizens. Without these set aside, our city would evolve into a community of young wealthy individuals who could afford market rents on the westside. These affordable housing units allow us to share West Hollywood with the elderly and people with disabilities or people living with HIV.

Answer: Every election cycle, the city promotes getting out the vote through public education, street banners and by televising a debate. Our turnout is not much different than neighboring Beverly Hills or Los Angeles.

Traditionally, there is higher voter turnout for a presidential election like we had in November compared to local government races. The city should not join the general election because our election would get lost amid the competing campaigns for propositions and initiatives, congressional races and Sacramento races.

Being at the bottom of the ballot would probably mean less participation, not more.

I am opposed to term limits. Each voter should have the right to cast a ballot freely for the candidate of their choice. Term limits eliminate choices from voters. Term limits have failed the state of California in Sacramento. Term limits end up strengthening the political players who remain after an election – lobbyists and staff. Political power then resides in those outside the electoral process.

Answer: The city should play to its economic strength, which is tourism and entertainment.

First, West Hollywood is in the black with prudent reserves that have given us a Triple A bond rating. We are in the category of 7 percent of cities nationwide that are not suffering through the current economic recession.

We have not had to lay off one employee or cut one program to our residents like neighboring Beverly Hills and Los Angeles. We enjoy our status of being fiscally strong because of tourism and nightlife, which are the largest sources of tax revenue that we receive.

Second, the city is completely built out. We have no vacant land to create a campus for high-tech industry that requires a concentration of high-skilled white collar workers to work most effectively.

Third, we have a strong main street economy along Santa Monica Boulevard that primarily has neighborhood-serving businesses along its corridor.

And finally, the Pacific Design Center and Melrose Avenues serve as an example of the creative class at work in the design, fashion and entertainment industries.

Our recent Fitch bond rating pointed out that we have a very diverse economic base, which has given us the ability to weather the downturns that occur in certain industries.

Probably the most corrupt politician in Southern California.

self-correction: It’s 45 out of 45…
The person listed in Weho…the address is in L.A.
And…. she shares that suite (or P.O. Box) with another contributor, Western Built Construction.

how come 44 out of 45 campaign contributions for john duran come from outside the city?
http://weho.org/Modules/ShowDocument.aspx?documentid=12115

Duran has outstayed his welcome as council member – even if Measure C Term Limits passes – he will get to start as if he’s never run for office. WE need to get these old timers out of there: 7 Terms! Of course there’s going to be corruption.