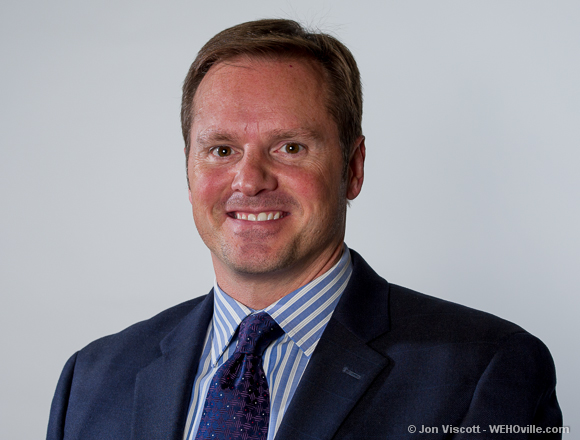 A Newton, Mass. native, Sam Borelli reluctantly moved to West Hollywood in 2000 when his then boyfriend was transferred to the city. “I was happy in Boston and really didn’t want to come here, but West Hollywood soon became home,” said Borelli who has been an at-large appointee to the city’s public safety commission since 2003.

A communications consultant who handles media relations and PR campaigns, Borelli also worked four years with Christopher Street West, the group that produces the annual gay pride festival. In a committed relationship with Bernard Rook, Jr. for the past 10 years, Borelli, 45, got his first taste of politics at age 13 when he helped distribute fliers for Barney Frank’s first Congressional campaign.

Answer: West Hollywood should never be a “versus” community and, unfortunately, this has become more and more common in our city. For me, this sentence says it all: “the city must strike a balance between preserving historic West Hollywood and building for the present and future.” We must plan for thoughtful development that compliments our historic landmarks while reaching into the future and planning for opportunities aimed at cultivating the next generation of West Hollywood residents and businesses. This is particularly important since West Hollywood has become cost-prohibitive for many people. Young people especially, a core demographic that helped create this city, and has been left out of the affordable housing equation for too long. We must provide opportunities for young people to live in West Hollywood. I will work with stakeholders to generate solutions, such as micro-units, and work toward the incorporation of smaller units within our current and future senior living in order to foster intergenerational interaction. This form of community living builds bonds that offer unlimited opportunities for growth, sharing, learning and companionship.

As for the current process, the historic preservation commission was formed in the late 1980s and has been diligently working to safeguard what must be preserved. It is only when bureaucracy or politics get in the way that the system fails.

Answer: The answer is balance! And while there have been some instances of over-development in our city, most community members recognize the need for sensible growth. We are an urban village but we are also a thriving destination city. We are a walkable city but a vast metropolis surrounds us. I am for measured development. For example, four councilmembers rejected the Sunset Centrum Project at 8801 Sunset Boulevard at the bustling and typically congested intersection of Sunset/Horn/Holloway.  That over-sized project did not belong there. Do we need something on that corner that enhances and compliments the Sunset Strip? Yes! Could that project work in another area of the city? Quite possibly. During my time as a member of the Avenues Streetscape Working Group it came to our attention that Beverly Boulevard was actually a quite under-utilized throughway. It’s possible that a project of that magnitude might have been better served there.

Interestingly, even with the past development the number of residents hasn’t drastically changed in 20 years. What we can do better is work on transparency in our government and inspire, not discourage, community participation. Engaging all of the stakeholders allows the opportunity to work TOGETHER on projects to find common ground and reduces the us versus them culture that has unfortunately adversely affected so many in our now divided community.

Answer: I could not wait to turn 18 years old and vote. At 13 years old I passed out flyers in my neighborhood of Newton, MA to help get Barney Frank elected to Congress. Thus began my community service. To see the power of the electorate at that age sparked my long-held belief in the power of the people to elect their representatives to office. In the past six months, however, I have come to believe that term limits could create a more level playing field here in a city like West Hollywood. There are numerous unquestionably qualified commissioners, board members and other actively engaged residents who would make excellent councilmembers. Unfortunately, the current system does nothing to encourage and, in some cases, actively discourages many from even considering the aspiration of what should be a natural part of any progressive community.

The one thing that I would change in the current term limits ballot initiative is the ability to be elected again after a term off. I think that is a more democratic approach.

During the six or so weeks that the team working to get term limits on the ballot were canvassing they also registered 400 voters. That is an enormous and commendable accomplishment. West Hollywood is supposed to be the “Creative City.” We should work harder to encourage our population to vote. Our current system encourages only Election Day turnout.  We have to meet the people where they are: their homes, their phones and their computers.

Answer: While I believe that we have many creative people who populate our fine city, we have lost our way collectively as the “Creative City.” West Hollywood used to lead as an initiator of original ideas and progressive policies and we need to reclaim that standing.  We can and we must lead the way on innovative solutions to transportation and parking.  Building more parking structures does nothing to encourage a cultural shift where we leave our cars behind and walk or utilize local transportation options. I will quickly work to develop an environmentally friendly nightlife shuttle that decreases the number of vehicles on our streets but has all of the fun and flair that West Hollywood is revered for.  I will also push for the implementation of a user-friendly cycle-share program that is mutually beneficial to both residents and visitors.

West Hollywood is fairly well balanced when it comes to knowledge versus service economy. In addition to being a service-based destination city, West Hollywood also has many individuals and businesses who are sought after for their expertise and wealth of knowledge on subjects ranging from public relations and marketing to the political to cutting edge technology and social media to architecture, design and urban planning.

The idea that growing old equals growing corrupt will not sit well with the many older people who ALSO live in West Hollywood. It’s fine to be cutting-edge, but not for its own sake. “Old timers” have been re-elected in part because they really do believe in West Hollywood. Not every politician, and certainly not every “old timer” becomes corrupted by long service.

its funny… there seems to be a lot of the same people on city council that were part of the original council back in the 80’s..I came back to LA 8 yrs ago..and was like ..WOW..a time warp…time to change that..and allow some new blood into the city.. and not those swayed by wealthy developers.. just saying..

Sam Borelli will help us get the ‘old timers’ out of the council member seats. Lets get fresh blood in there. WE need to get these old timers out of there who are working the system – some of them have been around for 7 Terms! Of course there’s going to be corruption or stagnation. Let young minds and ideas have a voice and lets bring We Ho into modern thinking. In addition, half the city is ignored because of activism. I want fair representation on the council. There shouldn’t be a litmus test of gay pride – no matter… Read more »