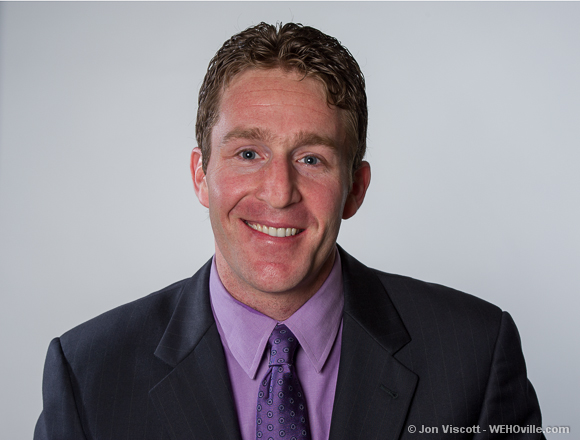 Born in New York and raised in Brentwood, Nick Garzilli moved to West Hollywood just over a year ago. “Some of the best times of my life came in clubs and hotels in West Hollywood,” said Garzilli, 35. “So when it came time to move, this is where I wanted to be.”

Married to his wife, Joanna, since 2006, Garzilli, graduated from the USC School of Theatre and spent the next five years as a struggling actor-waiter. These days, he is a sustainable transport entrepreneur, advocating for building Jestons-esque solar-powered, rapid personal transportation pods.

In 2011, Garzilli announced his candidacy for California’s 33rd Congressional District, running as a fair tax activist. He dropped out of that race early to instead explore the possibilities of vacuum transportation technology.

Answer: I like the historical landmarks spread throughout West Hollywood, but where do we draw the line? Old buildings like the historic El Mirador should obviously be protected. However, the events surrounding El Mirador show that the process the city uses to designate cultural and historic landmarks needs fixing. Buildings like that can’t sit in limbo for years. It was not fair to the residents and to the developer. In the end it is up to the council to act and in a timely manner.

I think most of the things that have already been recognized as having historical significance have been identified. I wonder how many more places are left in West Hollywood? When a hole-in-the-wall burger stand becomes a historical landmark, what else? I love the restaurant Joey’s. As a councilmember can I make Joey’s a historical landmark? Is there a landmark outside the Viper Room where River Phoenix died? It just seems like a slippery slope. I think Santa Monica has done a good job in protecting old signs from destruction and we should look to them for direction on how to keep the old but welcome the future.

Answer: If we want to keep our urban village and enjoy all the benefits of urban density it needs to be possible to live in LA without a car. I am the only candidate for WeHo city council who has a viable plan to fix congestion and parking shortages with my proposal for a privately funded Personal Rapid Transit (PRT) network. The farther the network spreads, the less the need for cars.

Imagine WeHo as the first city in the world to have a privately funded solar powered PRT network. These car-sized pods will hang on rails above our streets. They act like horizontal elevators, just push the button and you are on your way traveling 30-40 mph, non-stop, no traffic, no drunk drivers, no oil. Solar panels on top of the rails power the pods and on hot days feed excess energy back into the grid, right when it is needed most.

My vision is of local PRT networks like JPods to be connected by high-speed PRT-like Evacuated Tube Transport Technologies (ET3). JPods is like wireless. ET3 is like fiber optic. Taxpayers have invested heavily in our existing roads and highways. The empty space above these public right-of-ways should be put to the greatest public good. That is why a regulatory framework and performance standards are needed so companies and capital are interested in building PRT, which is something I will introduce if elected. In the meantime, we should get the most we can out of the existing light rail network by cross-connecting the lines with local PRT-like JPods.  I would want to immediately connect the WeHo PRT network to the Hollywood/Highland Red Line station.

With Metro everything revolves around getting federal money for projects. Unfortunately, we have an economy that is based on debt, war and oil. I do not believe the federal government can be counted on to fund transit projects in the future because it is bankrupt. Congestion is a local problem with a local solution. We must take our mobility into our own hands and solve this block to block with local and sustainable PRT deployment.

I have dedicated my life to getting humanity to live on this planet in a sustainable way and to protect the environment with new transport technologies. We are not addicted to oil. We are addicted to the transportation that oil provides us. I need your help to change the lifeblood of our economy from oil to ingenuity on March 5th.

Answer: I support the term limit measure on the ballot. It is obvious that most of the city council members have been in office for decades. That has led to a popular uprising of people who have organized against that type of domination from ever happening again. The president of the United States is limited to eight years by the 22nd Amendment. I think the same should be made true for city council members. Fresh blood will bring fresh ideas. With voter turnout only at 21 percent for the city election it is very easy for the incumbent to win just by counting on their dedicated core of supporters to turn out. A new candidate must wake people up and make them realize that there is something very important to vote for on March 5th.  Vote for me on March 5th and let’s legalize innovation in transportation above our streets.

To get the level of civil engagement up in West Hollywood I do think there is more the city can do to get the voters involved. I am sure March 5th could be promoted in local bars or hung on banners on the streets. Maybe make drink coasters that say “Vote March 5th” with the WeHo logo? We already do that to prevent drunk driving, why not to promote the city election? A city-sponsored voter registration drive and awareness campaign is a good idea and would be a good start in the right direction.

It is true that there is little incentive for the current politicians to increase turn out because it means more people will be looking over their shoulder.  Shifting the municipal election to the National Election Day should be examined as an option. I am open to the idea, but I need to know more about the feasibility of the switch. I do worry that the national elections may drown out the WeHo contests. There is something nice about being the only game in town.

Answer: Richard Florida titled his paper “The Rise of the Creative Class: Why Cities Without Gays and Rockbands are Losing the Economic Development Race.” Well, two things West Hollywood is not short of are gays and rockbands so we got a great head start! I think even more of the “Creative Class” would want to live in WeHo, but they don’t want to be stuck in the gridlocked center of a concrete jungle known as Los Angeles.

The creative class of people that Richard Florida says are essential to the economic health and well-being of a city will flock to WeHo when we have the world’s first privately-funded solar powered PRT network. They will want to live in WeHo without a car. The Creative Class is know for being early adopters of new technologies and they will want to be the first people to ride the WeHo PRT daily. The Creative Class craves stimulation, which there is plenty of in WeHo, but they also value outdoor recreation and active sports like mountain biking, hiking, trail running and jogging. The PRT network will spread and eventually it will only be a quick ride to the state park trailheads and nature. Forget about driving and trying to find a spot, take the WeHo PRT.

Hey, how about that pod system of transit? I think you should mention the pod thing. I know, why don’t you run for city council so you can promote your jetsons pod thing? How much money will you make off it? Glad a city council race can raise so much in local revenue by way of one person’s pod transit income. Pod travel? Anyone heard of it?