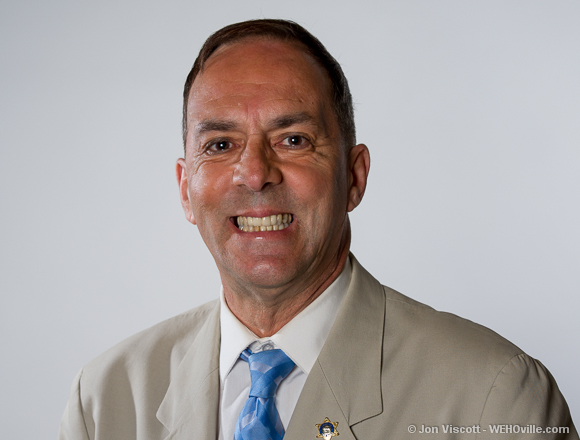 Tom DeMille moved to West Hollywood in 1992 to be an actor after landing a part in the Jeff Bridges-Tommy Lee Jones action thriller “Blown Away,” which was shot in Boston. Since then, he’s done extra work on more than 100 shows/films, including five years as a Klingon on “Star Trek: Deep Space Nine.” Today, DeMille keeps his passion for the arts alive painting pop art.

With a taste for politics, DeMille, who has been HIV positive since 1998, ran for the Provincetown, Mass. city council once and has run for the West Hollywood city council three times. The 57-year-old DeMille was Massachusetts congressman Barney Frank’s lover for three years in the late 80s/early 90s.

“Barney and I are still good friends,” said DeMille. “I spoke with him recently. I wished him well on becoming a senator and he wished me luck on my campaign.”

Answer: Total inventories have to be made about housing stock, tax incentives and/or tax credits to landlords to remodel existing stock. Landlords should be responsible for their properties. Every historic building is really on a case-by-case basis. Rudolph Valentino was married on Flores Street. All throughout our area, I can make a case by going back in history; there is a reason to save every building in West Hollywood. As a published historian at Hollywood Forever Cemetery, I am aware of our rich history, and the people who have come before us. What needs to change? I will give you an example: the residents’ voices have to be respected.

Answer: We could work with Bank of America at Crescent Heights to build a four-story parking garage with the bank store-front that could house 400 vehicles. The city could buy the 7825 Santa Monica Property that is adjacent to our already existing municipal parking lot. On that land, we could build the same type of parking structure. We also need to look to our immediate future to develop gay-friendly senior housing and we have to find developers who are willing to develop studios that are affordable to young artists coming to our city. The walkability issues are incredibly complex at three in the afternoon. You’re pretty safe if you are not crossing the street, but at night, everything changes. The street lights are out across the city and throughout our neighborhoods. Capital improvements in our residential neighborhoods are essential to the livability of residents, especially residents who own dogs. The Chamber of Commerce has to do more for small business. If you walk down the street you will see our streets are littered with empty businesses.

Answer: The one thing lacking in West Hollywood is democracy itself. Never in my wildest dreams could I ever figure out why a candidate or sitting city council member would be willing to spend upwards of $100,000 for a job that pays $500 a month.

The first rule I learned in West Hollywood when I came as an actor, never pay for a job! The incest over time with developers is deplorable. Never has there been a time where so many mistrusted this current makeup of the city council.

As someone who has run four times, I can honestly say that there have been many residents who have run who would be very qualified to represent our city, and I include myself. I could see myself voting to increase the city council to seven members and dedicating one seat to the Russian community. It’s been a long time since the Russians, our neighbors, our friends, have been taxed without being represented. And if it takes term limits, vote early and vote often.

Answer: Build more housing for artists! Let them sit and paint on our sidewalks, anywhere they would like to! Let them display art! More programs for children in the arts. Musical instruments in all of our schools. Change Gay Pride so it doesn’t look like it has for the same 25 years! Close Santa Monica Boulevard for 48 hours from La Cienega to Doheny and really celebrate gay pride … not stuck in some corner like it was 1970!