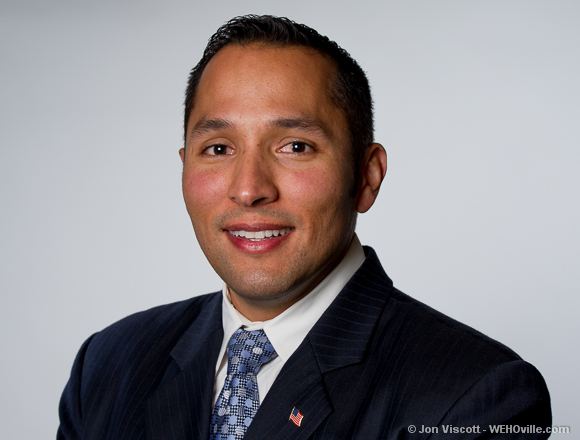 Born in El Paso, Texas but raised in New Mexico, Arizona and Yucaipa, Calif., Chris Landavazo long dreamed of living in West Hollywood. Even while serving in the US Navy as an air traffic controller, his goal was always to get here.

“No matter how far I roamed, I never forgot my visits to West Hollywood,” said Landavazo, 37. “Walking down the street in Boystown, I’d see groups of gay men having dinner, being together, enjoying community and I knew that one day I too would be here to enjoy, preserve and to foster this unique community.”

He first got to West Hollywood working as a LA County Sheriff’s deputy. He work there for 18 months before being transferred to his current assignment in the Transit Services Bureau Special Problems Unit in South LA. Finally taking up residence in West Hollywood in October 2011, Landavazo is also a founder of Cops 4 Causes, a nonprofit benefitting people facing life-altering circumstances such as cancer or HIV/AIDS.

Answer: “Preservation vs. community development” is an issue of striking balance and advocating for the inclusion of our residents’ voices. Additionally, representation on our commissions is equally important to the process and I believe in empowering the best minds to guide our decisions in a completely transparent way.

Transparency has become one of the focal points of my campaign. Too often, it seems members of our community keep asking for more involvement and transparent government with little to no response. I believe in, as President Lincoln stated, “government of the people, by the people, for the people.” To this end, as your councilmember, I will work with the community to ensure a more open, civically-engaged and transparent city government.

A. I am a firm believer in finding the right people for the job.  As your councilmember I will implement a qualification-based selection process for my commission appointments.

a. This process will be open to all residents and business owners in our city regardless if you supported my candidacy or not.

b. I will implement via my deputy a day a week to meet with and listen to our community members who would like to talk about issues and ideas in our city.

A more committed effort of civic engagement in West Hollywood will ensure as a community we are striking the right balance.

Answer: Implementing smart growth principles to create walkable neighborhoods is one of my top priorities. Walkable communities are desirable places to live, work, learn, worship and play, and therefore a key component of smart growth. In West Hollywood, creating walkable neighborhoods is particularly appropriate since we are a city of only 1.8 square miles. To foster walkability, we must mix land uses and build compactly, and ensure safe and inviting pedestrian corridors.

My vision is to scale development to fit the needs of our city while preserving West Hollywood’s character. To achieve these goals, I will enhance our civic engagement, advocate for the creation of a civic engagement team, and advocate our 30-year plan be a living document to guide our growth.

To find out what my strategy to implement smart growth principles includes, please visit Landavazo.com for a full version of my community plan.

Answer: One of the most remarkable attributes of our West Hollywood residents is their passion for our city. Whether pro-development or in favor of slow growth, it is clear to me our residents want leaders on city council whose top priorities are safeguarding our city and who are willing to listen to them, who are transparent, responsive and accountable to our community members.

My vision for our city is a civically engaged community.  I will work to enhance our civic engagement efforts and foster an environment that welcomes open dialogue with the very people we serve.

My plan is to use my experience as a law enforcement professional and educator to make decisions and set common-sense policies to provide for the safety of our community.  I will work to implement initiatives to foster our civic engagement via the establishment of the West Hollywood “civic engagement team,” “civic impact zones” and use of technology to provide greater access and connectivity with the community we serve.

Yes – Municipal elections should be shifted to coincide with the national elections.

Yes – Our city should sponsor a campaign on the sidewalk to register voters, which could be accomplished via the comprehensive CIZ plan outlined in my community plan.

Answer: As a destination city we will always need to find a balance of fostering economies.  However, before we can focus on the balance between a knowledge economy vs. service economy we must first address people’s ability to afford living in West Hollywood. As a young professional, blue collar middle-class American, I can attest that it is very expensive to live here in West Hollywood.

As your councilmember, I am committed to creating a range of housing opportunities and choices: Providing quality housing for people of all income levels is an integral component in any successful community. Ownership is a key component to community care-taking and civic engagement.

In West Hollywood, the need for more affordable housing is evident. The average cost to purchase a home in 2012 was $477,750 (The median sales price for homes in West Hollywood for October 2012 to December 2012.) This represents a decline of 4 percent, or $19,750. Sales prices have depreciated 17.6 percent over the last 5 years in West Hollywood.

The average cost to rent a one-bedroom apartment in 2012 was $1,889. These numbers are staggering and the result is that many West Hollywood residents can no longer afford housing.

It is clear to me West Hollywood needs to develop warp around strategies that address our needs as a community. My “Community Plan” creates a way to utilize a civic engagement model to ensure we are integrating our best assets – People – to keep West Hollywood a safe, balanced, creative and forward-moving city.