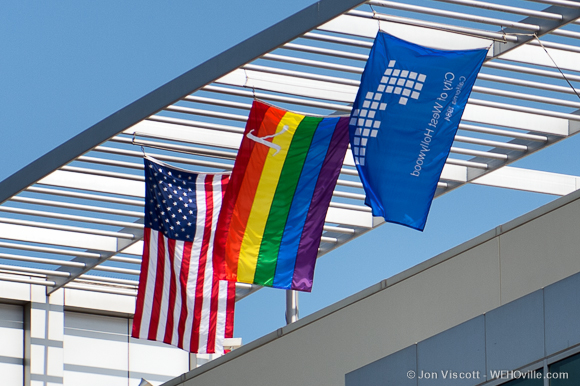 Larry Block may not officially be a candidate in the March 2015 West Hollywood City Council election, but he sure stirred the political pot at the City Council meeting on Monday night when he presented two rainbow flags to the city.

At the June 3 council meeting, Block suggested during public comment that the rainbow flag symbolizing gay rights should be flying over West Hollywood City Hall. Two days later, he got his wish.

However, the rainbow flag that joined the American and West Hollywood flags was slightly larger than the others, prompting City Manager Paul Arevalo to request a properly sized flag. Monday night, Block, who owns the Block Party clothing and gay souvenir store at 8853 Santa Monica Blvd., at Larrabee, donated a properly sized rainbow flag to the city.

“The gay flag is symbolic. It’s symbolic of acceptance and diversity and tolerance,” said Block. “When I travel or you travel to any state or any country, it’s like a big welcome sign, ‘You’re welcome here.’”

Block also brought a second rainbow flag, which he presented to a sheriff’s deputy to fly on the flagpole outside the West Hollywood Sheriff’s station.

The audience gave Block a thunderous round of applause for his gesture.

However, things quickly turned for Block. A few minutes later, the sheriff’s deputy gave the rainbow flag back to him.

“He told me he wasn’t authorized to accept it,” Block said. “He said he personally didn’t have any problems with gay rights, but that I needed to present [the rainbow flag] to the captain or the lieutenant in charge of the station.”

During his presentation of the flag, Block said, “What ever happened to Gay Camelot? What took so long to raise the rainbow flag on our City Hall that says to every gay, lesbian and transgender kid, ‘You’re welcome here.’”

“That’s a pretty outrageous thing to say to a city that was founded on LGBT rights,” Duran said during his council member comments. “The city of West Hollywood is shared by both gay, lesbian, bi and trans people and straight allies. It belongs to all of us. It’s not just a city of gay men. It belongs to heterosexual people as well … let’s not ever give the impression that City Hall has become exclusive to one part of the West Hollywood community.”

While Duran got some applause for his comment, it also surprised many in the audience. In the past Duran has spoken about the importance of rainbow flags, noting that tourists still routinely have their pictures taken in front of them along Santa Monica Boulevard. The most widely accepted figures indicate that 40 percent of WeHo’s 34,000 residents are gay men.

Monday night, Duran went on to say that rainbow flags fly over the intersection of San Vicente and Santa Monica boulevards, which is considered the heart of the Boystown district.

“We fly rainbow flags at the corner of Santa Monica Boulevard and San Vicente 365 days a year,” Duran added. “The notion of flying a flag is not something that we created or invented. That’s been happening for the past 12 years at that corner. There’s also rainbow crosswalks there. Let’s be considerate of the fact that our heterosexual friends, neighbors and allies are also part of this community and not ever exclude them.”

A quick check of that intersection shows that Duran misspoke. The corner only includes rainbow crosswalks. The flagpole for the sheriff’s station on the southeast corner includes an American flag and the California state flag.

Some businesses at that intersection once had rainbow flags on their stores, but the nearest rainbow flag put up by the city is on the flagpole in the median of Santa Monica Boulevard near Huntley Drive, about 1,000 feet to the east.

if west hollwood was founded on gay rights as Duran says why did it take 27 years for the rainbow flag to go up at the city hall….and now he says the rainbow flag excludes heterosexuals….sounds like a politician… give the guy some credit who spoke up.

thanks larry for getting this whole awareness in motion. its all healthy. keep going. its ALL good

Just make sure the California flag is not left out.

What’s with John Duran? Time was he wanted to emphasize the gay community in West Hollywood. Just a couple of years ago he was leading the effort to designate the section of Santa Monica Blvd from La Cienega to San Vicente as Historic Boystown and wasn’t he one of the main sponsors of the Go Go Dancers Day? I just don’t see how you can get any gayer than that!

I remember when I was 17 and the first time I walked into west hollywood I didn’t have much to do being under 21 but as soon as I saw the two rainbow flags it basically put a relief on me that this is a place I am always welcome no matter how different I am. Thats what a rainbow flag represents is all of us are equal no matter what color, race, sexual orientation, religion, gender and etc. So having a rainbow flag up above city hall definitely makes me feel welcome and proud and it would make me… Read more »

I work everyday by the sherriff station and there is NEVER a rainbow flag flying at that intersection. I think it would be a great idea to have a flag at the intersection because though we do have rainbow walk-ways, they normally get dirty and people in cars don’t notice it most of the time. I personally think we should have a flag at every intersection.

Since the DOMA decision is tomorrow its sad there is no rainbow flag within an eyeshot of the intersection. I just left the corner and there is not a rainbow flag. Seems like Block was on target. John Q Public donates a flag and the councilman Duran showed anger? Im confused here. Why is Duran so angry towards a citizen speaking up? While the Boystown concept does not exactly interest me I admire Blocks approach to the issue and have to step back to see what our councilman is drinking if he states ‘theres a flag that is flying 365… Read more »

It appears Mr. Duran lashed out blindly once again for fear of being out-flagged. Another angry soliloquy that made no sense.

Gentlemen, you’re both pretty! :). Maybe the residents of WeHo, “Boys Town”, should make the decision of how and what they approve to be hanging to represent them as a joined community. Although, maybe it was never voted about hanging the American flag, because there are enough diverse nationalities living there to have display interest in other flags, so, in a USA city, we hang the USA American flag; however, what is flying in Korea Town, China Town, etc.? Imagine that if anyone were to become a resident in West Hollywood, WeHo, Boys Town, CA, or whatever it is referred… Read more »

There’s also rainbow crosswalks there. Let’s be considerate of the fact that our heterosexual friends, neighbors and allies are also part of this community and not ever exclude them.”

I think that is the first time a member of the Council has ever spoken up for the hetero community. This comment by Duran is true.

Never have I seen a Rainbow Flag at the corner of Santa Monica and San Vincente…Mr.
Duran seems hypersensitive to well meaning gestures of Mr Block and his donation of
the City Hall flag and subsequent comment,