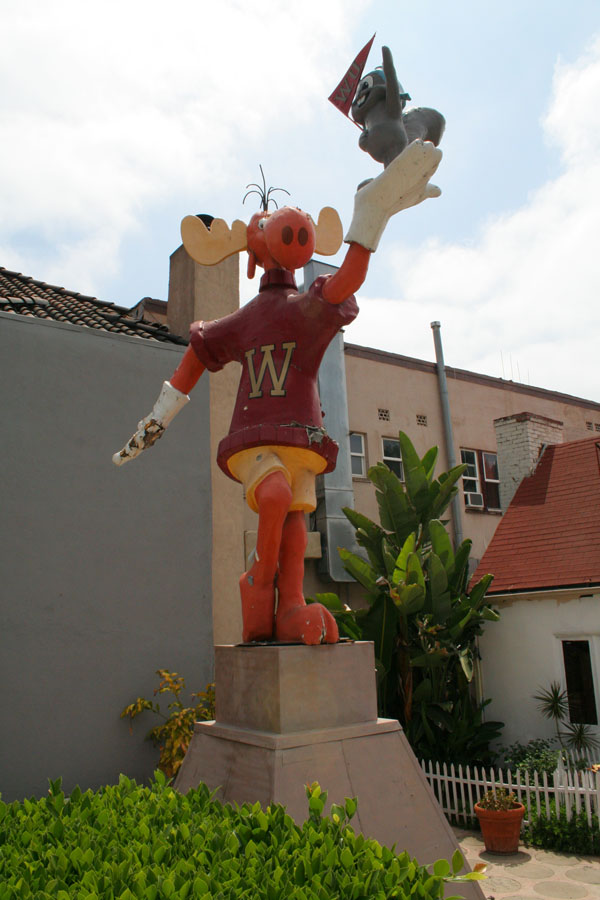 Perched across from the Chateau Marmont, in front of what was until recently Hollywood Hounds, is Bullwinkle Moose, nearly 20 feet tall and in mid-pirouette with his friend Rocky the Flying Squirrel balancing in hand.

Ever wonder why the famous moose is mounted here on Sunset Boulevard?

The building directly behind Bullwinkle, 8217 Sunset Blvd. at Havenhurst, was once the home of Jay Ward Productions, the company responsible for a wide collection of cartoon characters, including Rocky and Bullwinkle, Peabody and Sherman, Dudley Do-Right, George of the Jungle and Cap’n Crunch. Jay Ward was the creator and producer of many of America’s most popular television cartoons.

To celebrate “The Bullwinkle Show” moving to the NBC network and a color format (while also feeding Jay Ward’s obsession with elaborate publicity stunts) the likeness of the Moose and Squirrel was revealed on Sept. 24,1961 with great fanfare.

All but one lane of Sunset Boulevard was closed and blonde bombshell Jayne Mansfield, also known for publicity stunts and for being the inventor of the nip-slip, performed the reveal (no not that reveal!) to a crowd of 5,000. And while today Bullwinkle stands still, when the curtain dropped in 1961 the statue spun in place, round and round and round.

In addition to the spinning statue, Ward also marked (mocked) the Hollywood occasion with his own take on the Chinese Theatre’s celebrity hand prints. Still intact around the base of the statue are a series of concrete circles, each with a signature and small impression, not of hands, but elbows. Why the elbow? So celebrities did not have to put down their martinis, of course!

The elbow collection includes: Walt Disney, Spike Jones and his band, Dale Olson, Rowland Barber, Bill Scott, William Conrad, Paul Frees and many others, most of whom were involved with the Rocky and Bullwinkle world.

As if these shenanigans were not enough, Bullwinkle’s pose, spin and attire were all a carefully calculated contextual commentary. Directly across Sunset was a one-of-a-kind billboard advertising the Sahara Hotel in Las Vegas. A shimmering blue backdrop for a scantily clad mechanized showgirl, spinning atop a silver dollar, it was a real traffic stopper. Bullwinkle adopted her alluring attire, leg-up pose and signature showgirl spin.

The Sahara girl became quite famous during her decade on the Strip (1957-1966), both for the incredible number of complaints she drew from residents of the Chateau Marmont, in whose windows her dance never ceased, and for her place on the cover of writer Gore Vidal’s controversial 1968 novel “Myra Breckinridge.” “Myra Breckinridge” was a satire on American culture and an attempt to break down the assumption of gender and sexuality norms. It was a potent voice in the 1960s and 70s sexual revolution and much of it was set at the Chateau Marmont.

Yet even Vidal, who lived at the Chateau from 1956-1959 while writing for MGM and used the showgirl’s image for his book’s cover, said of the billboard, “Oh, God, to wake up in the morning with a hangover and look out and see that figure turning, turning, holding the sombrero — you knew what death would be like.”

The showgirl was also the inspiration behind the pose and outfit (cowboy hat included) that Raquel Welch sported on the poster of the book’s film adaptation of the same name. ”Myra Breckinridge,” the film, has consistently been named one of the worst films of all time and Vidal even disassociated himself from it.

Vidal did not write his story of the transexual Myra/Myron while staying at the Chateau Marmont, but was familiar with the locale. The view from the Chateau for much of the 1960s included both the showgirl and her cartoon parody in the same eyeful. Double figures, both giant, each turning, turning and turning.

Could it be that Vidal’s attack on sex and gender norms, and his poke at the Hollywood studio system, was shaped by Ward’s mixed-gender Moose monument?

The showgirl was unceremoniously taken down in 1966 and replaced by the Marlboro Man, a 60-foot tall silhouetted display of old-fashioned American machismo. The Marlboro Man was exactly the kind of retrograde male sexuality that Gore Vidal’s Myra would have taken great pleasure forcing into submission.

And were Jay Ward still around, this cowboy was the kind of prominent pop-culture icon that would have been ripe for parody, prompting another free flip-flop of gender by his unexpectedly liberated Moose.

Come to where the funny is. Come to Moose country.

Any leads on pictures of the Sahara Girl? Surely some took a photo of her back then? Thanks!