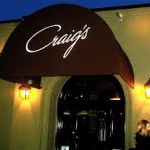 We try not to go all ga ga about the celebrities who crawl the streets of our little burg. But Showbiz411’s report that Elton John and his partner, David Furnish, celebrated the release of John’s new album with Lady Gaga and Johnny Depp at Craig’s on Monday has even our heart (yes, we have one!) beating faster. Craig’s, at 8826 Melrose Ave. near North La Peer, is “the” celebrity hangout in WeHo (Sarah Silverman! Lisa Kudrow! Kelsey Grammer!) We bet Elton and Gaga were talking about those pesky Russkies who are protesting his upcoming concert in Russia. Global Post reports that a Russian parent group has asked that the concert be banned, saying in a letter to Vladimir Putin that “the singer intends to come out in support of local sodomites and break the current Russian law, directed at protecting children.” Indeed, John says his concert will be in support of gays in Russia. “As a gay man, I can’t leave those people on their own without going over there and supporting them,” he told the Guardian. “I don’t know what’s going to happen, but I’ve got to go.” We’re guessing that trip is one reason Elton and Lady Gaga weren’t dining at WeHo’s Traktir.