Some West Hollywood West residents are calling for a moratorium on construction of single-family homes until the city comes up with new guidelines for regulating them.

During a neighborhood meeting held Wednesday afternoon, residents of the neighborhood bounded by Melrose Avenue on the north and Beverly Boulevard on the south, between La Cienega Avenue and Doheny Drive, expressed concerns about the number of “big-box”-like homes being built in their neighborhood.

Residents said an estimated 20 single-family homes have been demolished in the past year with two-story, modern-style, tract-like homes replacing them. Some of the 20 attendees at the meeting described the new homes as “big, glass stucco boxes.”

“Our biggest concern is the character of the neighborhood,” said Bob DeCastro who lives on Ashecroft Avenue. “The concern is that many of [the new houses being built] all look the same.” 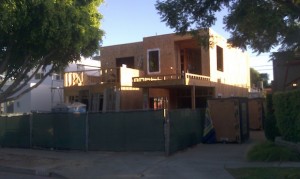 “We don’t mind two-story houses going up replacing a dumpy 1920s house. The problem is they’re all the same,” said Manny Rodriguez, who lives on Dorrington Avenue. “We live in an eclectic neighborhood and these all seem to be the same design. This is a boxy style that isn’t bad in and of itself, but there are 20 of them.”

One modern, boxy house built a year ago at 8937 Rosewood Ave. near Doheny recently sold for $2.2 million. A quick walking tour of the neighborhood found at least one modern-style home under construction on nearly every block.

While the homes meet the city’s zoning regulations, residents complain developers are maximizing size, height and setbacks (amount of space between the property line and the building).

“Developers are exploiting every bit of wiggle room they can,” said one resident.

Since buildings under 10,000 square feet don’t have to go before the Planning Commission for approval, city staff members are signing off on the plans. Several residents suggested creating a design advisory committee for single-family homes, similar to the Planning Commission’s design review subcommittee that provides input and guidance for larger buildings.

Resident Terry Leftgoff, a former West Hollywood West Residents Association board member, said the city initially had an “overlay zone” (which provides specific zoning provisions for specific areas) for their neighborhood, but that it was eliminated with the 2011 implementation of the new General Plan, which guides development in the city.

However, Stephanie Reich, one of the city’s urban designers, consulted the city’s zoning codes and told WEHOville on Thursday that while provisions for creating overlay zones are in place, none have been created. She said potential for creating them is still part of the General Plan.

One resident suggested creating a historic preservation overlay zone that would add an extra layer of protection for the neighborhood.

Reich and Kiran Hashmi, deputy to Mayor Abbe Land, told residents they would relay their concerns to the City Council and the city’s Planning Department.

Size on the small lot is the major problem. This is going to be a political fight. At the meeting on Wednesday night one lady said the reason why the city council members voted in favour of the developers is because it is very costly to run for city council. I didn’t understand her point. What is she saying we have to do?

We recently purchased a home in the Weho West area we are discussing. Why should we be denied the right to tear down our ugly 1916 bungalow house to build a new contemporary house? The idea that there is some historical value to these homes is just ridiculous. There are a few gems in the area but most of the homes are just plain unattractive and infested with termites. I do understand peoples complaints about the size of some of the homes being built but dictating what type of house or architecture someone chooses is not appropriate as long as… Read more »

I suspect many of these commenters are actually from the developers’ team. The fact is there is a serious problem with the lack of integrity with the new construction of apartment buildings and single-family homes in West Hollywood and similarly in neighborhoods nearby. Protecting the character of a neighborhood is every resident’s right. These developers have no interest in providing anything of quality to these areas. Whether you think the 1920’s homes that have been destroyed were ugly – is a matter of taste – but in many more well-protected neighborhoods (without corrupted city councilmen and women) – the homes… Read more »

I have no problem with similar, I do have a problem with builder’s going over the size limit. Builders show follow the same set of rules that homeowners follow, not be granted variances for greasing the city. It’s not taste, it’s principle. One of the pillars “our” city was founded on.

Oh go away. Every neighborhood in the country has houses that are similar as they were built by the same developer during the same time period, generally for profit. Over the years these homes are personalized to the owners, colors changed, styles updated, augmented, amended. People in West Hollywood are out of ideas and always looking for a fight now aren’t they.

Ghandy Man, there appear to be something going on with these new construction homes. I two examples, and I can list many more… 8937 rosewood avenue. Prior public records prior to rebuild: 816 sq ft, 2bed/2bath. On a 4002 square foote lot. New home sold as of February 27,2013 3 bedroom, 3.5 baths with pool and pool house. Public records Do Not list square footage! http://Www.Redfin.com/CA/West-Hollywood/8937-Rosewood-Ave-90048/home/6816406 9010 Ashcroft Avenue. Same issue, public records have never been updated to show actual new square footage. Records show 1356 square feet on a 5021 square foot lot. New home is 3 bedroom, 3.5… Read more »

I like that the area in question is referred to as West Hollywood West. I hope the same courtesy would be extended to West Hollywood East. Most of the time the area it is referred to as the Eastside……which always has negative connotations. There are so many huge apts going up on WEHO East, they may as we’ll be Hollywood West. Good luck finding a place to park at Ralph’s anymore when construction is completed on all the addl tax assets coming into the city coffers. And the westside is concerned about new single houses! Boo hoo.

CA Native ; Eric, are you speaking based on facts when you claim that the developers don’t comply with the building size regulations or it just feels this way to you? Ignoring the standards and the limits is another issue and I agree they should respect them! My impression from the article and the quoted opinions of residents was that some people just don’t like the aesthetic of the modern architecture. To some (like myself) many of the old houses there look pretty much the same too – mostly because of the poor style and bad taste. There are still… Read more »

Well said CA Native! No one is against progress and new construction.

Our biggest issue, is that the developers are exceeding building size regulations by applying for variances which exceed the square footage limits required by the city. And on top of the variances, the developers then convert the garages to pool houses. 900-1000 square foot bungalows are now nestled between 3000 square feet commercial residential buildings.

The developers should be held to the same limitations a resident would be if they were remodeling a home (no tearing down a house and creating their own rules).

The story sorta missed the mark. There are 3 issues: 1. Big box mansionization on small lots. Developers have found ways to defeat the city’s current standards (called the Floor Area Ratio) intended to prevent mansionization (buildings too large for the lot size). The size and scale of these new homes is inflated and is incompatible with the character of the existing neighborhood. Many of them tower over their neighbors and destroy privacy and visual character. 2. Clone houses with identical designs are spreading by the same speculative developers who are indifferent to the quality of what they leave. There… Read more »

I live in We Ho as well and I would gladly buy one of these “modern boxy” houses if I could afford them. I am a designer by trade and was quite pleased to see the very slow revival of the neighborhood and the appearance of new architecture instead of the old and damp houses (often – quite ugly) with tiny windows currently dominating the landscape. The sore misinterpretations of Hispanic and Mediterranean styles currently dominating the landscape look quite uniform to me in their bad taste. This is not to say that all the houses are like that but… Read more »