More than a decade after the city of West Hollywood began talking about what to do with the city-owned property at 1343 N. Laurel Ave. just south of Sunset and almost five years after controversial plans to build affordable housing on the site stalled, the city officially restarted the discussion Saturday morning.

“The past is the past. We need to look forward to the future to think what this property can be,” said Mayor Abbe Land, welcoming attendees.

Approximately 60 people turned out for a “visioning workshop” in Plummer Park to brainstorm ideas and form a general sense of what should be done with the 99-year-old house known as “Tara,” which was donated to the city in 1997.

Results from three exercises showed themes centered around nature, a community gathering space and an arts and cultural center. Participants first answered survey questions with an electronic clicker before writing down words and short phrases they hoped would describe the property five years from now.

“Heritage,” “oasis” and “community gem” were some of the most frequently used words.

Finally, participants used small toys, such as blocks and plastic figurines, to represent uses of the property.

Allegra Allison, a former resident of the house who spearheaded the “Sava Tara” movement to block the city’s plan for building 28 units of low-income senior housing on the property, was pleased by the workshop.

“The visioning was great,” Allison said. “The best thing about the process was that city staff and the consultants made it fun, which made it easy for us all, even those who used to be on opposite sides, to work to create something together. It was exciting to see that pretty much everyone has the same basic goals for the property.”

In 2008, the California Supreme Court ruled the city failed to get sufficient public input before proceeding with plans for affordable housing it hoped to build on the site. The fight leading up to that Supreme Court ruling nearly split the city in two and made activists of many residents. Councilmember John D’Amico told workshop attendees that the Tara controversy convinced him to run for office.

“We had the experience of trying to force something to happen there and we saw what happened to our whole community,” D’Amico said. “This property is extraordinarily important to us all personally and to what the narrative of our city is.” 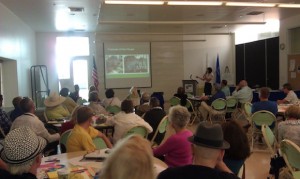 Jack Merrill, one of the first residents to join the Save Tara fight, was relieved the workshop finally happened.

“We have all been entrusted with this property,” Merrill said. “It is important to understand that its historic significance and context is tied to the sum of all of its parts, a literal survivor from a bygone era. It is the only site of its kind left intact in West Hollywood and a visit offers a look though a historic window to what it once meant to live in West Hollywood.”

Another survey, an online “creative brainstorming” exercise, will be available until the end of the year. The results from the two online surveys as well as the Saturday workshop will be presented to the City Council in mid-2014, followed by more public meetings.

In the meantime, the city is in the process of “mothballing” the house to temporarily preserve it until a final use can be determined. That mothballing includes replacing the leaking roof, fumigating for bugs, removing mold, repairing plaster damage and shoring up the flooring.

The original plan for senior housing and community use is still the most
sensible idea for this property.

But can you expect the council to really listen to the public? This property is a gem for WH residents to enjoy.