West Hollywood resident David Meyers remembers when he first laid eyes on the model of the Garden of Allah.

The model, a remarkably detailed recreation of the famed apartment complex on Sunset Boulevard between Crescent Heights and Havenhurst, had long been displayed in the Lytton Center, built on the storied site after the Garden of Allah was razed in 1959.

Sixteen years ago, the Lytton Center, which had become Great Western Bank, was remodeled and the Allah model was relegated to a yet-to-be-leased space on the property.

When Meyers, a hair stylist, decided to open a salon in the space, he saw the model sitting in the middle of the room.

“It was completely gray from dust,” Meyers said. “I thought I should have bought stock in Q-tips.”

Meyers, unaware of the storied Hollywood inn with surrounding villas, decided to take it home and “kick it around a little,” he joked.

“I called the owner the next day and said ‘You know the model you had in the salon? I took it home. Do you mind if I make a table out of it?'”

The property owner told him to keep it. 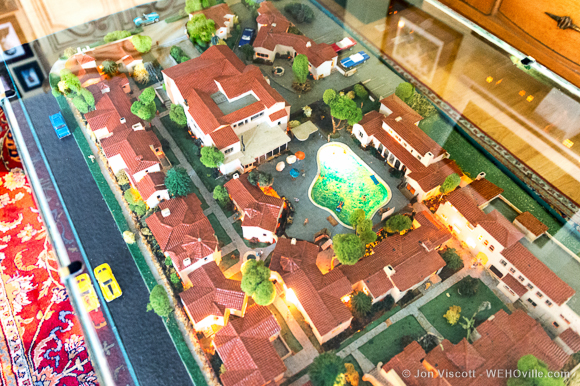 Today, the model, nearly unchanged and carefully encased in glass, still sits in the middle of Meyers’ living room in his West Hollywood apartment on Westbourne. It indeed acts as a table — and quite the conversation piece for guests.

Meyers, who manages the property and still occasionally styles hair in his apartment, has since learned plenty about the famous Spanish-Moorish complex that became notorious for the wild parties held there by the openly lesbian actress Alla Nazimova.

The story behind the model’s construction remains a mystery to Meyers, however.

During the 1920s through 1950s, actors, performers and writers called the Garden of Allah home, including F. Scott Fitzgerald and Robert Benchley.

The model includes the original mansion constructed as the home of Nazimova in 1919, and the 25 villas constructed around the main building in 1927.

According to Meyers, only five things are missing from the original model: two cars, a paperboy, waiter and little girl.

Meyers says he has come to treasure the model, and while many of his salon clients are too young to know anything about the Garden of Allah, some have recognized it.

A little more than a year ago, a friend visiting Meyers even tried to sell it at an online auction, going as far as to post a YouTube video.

“I had to send him back to Wisconsin!” Meyers joked.

While the video was unwanted, it did make Meyers a star in the LA County Sheriff’s Department office in West Hollywood.

“It’s funny, but a sheriff’s deputy was over and saw it and said ‘You’re David.’ I said ‘Is my name all over that station?’ Every time they come over they want to take pictures.”

The famous property is again in the news as developer Townscape Partners has proposed to demolish the strip mall, including the bank, to build a mixed-use project.

“We believe our project is fitting of a site of such prominence,” said Townscape Partner’s principal Tyler Siegel. “Our project will stand as modern gateway to Hollywood and the Sunset Strip.”

Included in the plans is a plaza and 10,000 square feet of open space.

Gabe Kramer, a communications consultant for Townscape, says a dedication to the Garden of Allah will be considered.

“These guys are committed to bringing interest back to the site. They want to do that in a respectful way, whether that be anything found under the pavement brought to light, or a dedication to the Garden of Allah,” Kramer said.

Below, check out photographer Jon Viscott’s shots of the model. 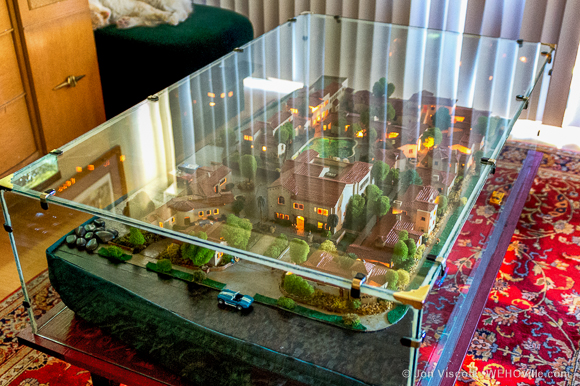 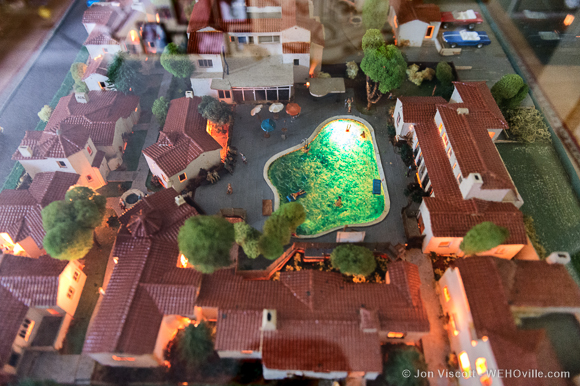 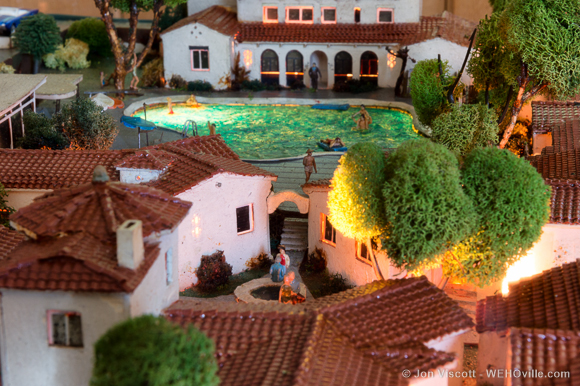 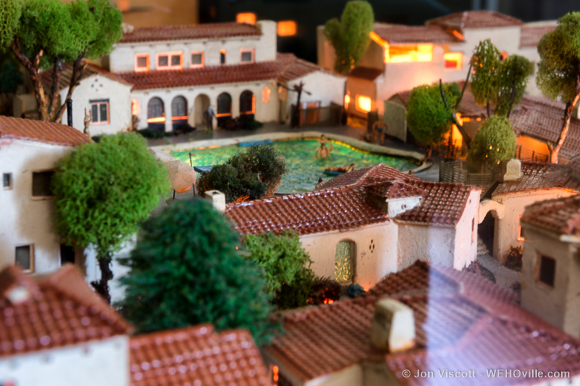 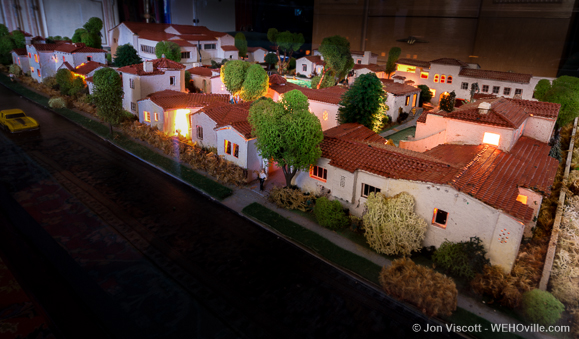 you people annoy me… he only restored it because he thought he would make money off of it… he could care less about the model….. i asked him if 5 or 10,000 would be an ok price but no he wants way more than that…. and he has been emailing a lot of true garden of allah lovers such as website owners begging them to buy it for way more money then most people own.. so stop sitting on your computer acting like you know the guy saying he should own it cause he cares… he does not even want… Read more »

Brandon, are you a personal friedn of David? Where does your inside scoop come from? Also, I have no problem with him selling it, he restored it.

This model was in the bank lobby when it was Great Western Bank. I used to see it all the time, and it was very dirty and not looking great like it does now. David is the rightful owner, so everyone needs to STFU. I do think the museum idea is a good one.

Here is a short film of the auction prior to the demolition https://www.youtube.com/watch?v=IfgWkiNvJyk

Some interesting history about Bart Lytton and his S&L and “Lytton Center of the Visual Arts”:

awesome find, thank you David! it is too bad that apparently we didn’t have much of a historic preservation movement back in the 50s, that would have tried to prevent destruction of this treasure for the god awful strip mall which (at the time probably seemed ‘modern’) now just looks like junk. i wish there was a model of what historic plummer park with the original plummer house and historic great hall long hall looked like before we demolished one and let the other one rot away. the only thing better than having a model like this would be preserving… Read more »

After thinking about it, the museum idea makes a lot of sense. Please do not hear my workds as finding fault with David; indeed he saved it and restored it. It might have been trashed otherwise. Thank you, David 🙂 A little history: the model was commissioned by Lytton Savings and Loan, who purchased 8150 Sunset. I suppose it was an homage to the Garden of Allah, of which Lytton tore down. X amount of years later, Lytton goes out of business, or moves, and does everyone a diservice by not specifying what should be done with the model. It… Read more »

I don’t think David should give the model to a bank or commercial enterprise. If he ever donates it, it should be to a museum that is qualified to care for it.

The L.A. County Art Museum’s new wing celebrating Hollywood — located in the old May Co. building on the corner of LaBrea and Wilshire — would be the perfect home for this model.

Wow! Some are so quick to tell others what to do with their stuff. David should not be “talked” into anything. He’s the one who should make any decisions about it as he’s the only one who has seemed to care about it’s existence all these years. You do what you think is right, David. There’s a lot of folks that will back you up whatever you decide to do, including myself!

David saved the model, I’m sure the former owner would have probably thrown it away. It has survived this long at his home, he should keep it, and I’m sure he appreciates the history of the model. Suggesting he return it to the “original” site, is like telling someone who finds/restores items to return the item to the “original” owner/location.

Love so much that you saved this David! Thank you!