The rainbow flag, or the design of the latest apartment building, or who should or shouldn’t be running for West Hollywood City Council. That’s what dominates the conversation (at least on WEHOville) some days. But the issue that never goes away in our auto-obsessed city is the ubiquity of (other people’s) cars and the pain they cause us.

The solution to our traffic woes, if there is one, isn’t yet evident. The City Council declined last month to approve a proposal by John D’Amico to install Sheriff’s Department deputies at busy intersections on Santa Monica Boulevard to see if they could ease traffic flow, citing the high cost and uncertain results. The city’s Community Development Department is likely to return with other ideas.

But while we wait, data from the U.S. Census American Community Survey (ACS) suggests there are ways to ease your own traffic woes besides working from home, riding a bicycle or (horror) taking the bus.

First some background. The ACS is an ongoing community-level survey of everything from ethnicity to household income to travel time to work in American cities. It asks different questions than those asked in the U.S. Census, which is conducted every ten years. The data is based on a survey sample, and it has a margin of error that suggests the figures might be off as much as ten percent in either direction.

One of the first things the ACS data makes clear is that if you want to spend less time driving, you should go to work earlier than 8 a.m. (or later than 10 a.m. if you can negotiate that with the boss). Half of the 19,340 of West Hollywood 34,000 residents who travel to work each day do so between 8 a.m. and 10 a.m., with the busiest period between 8 a.m. and 9 a.m. That’s when 6,205 local commuters are on our roads–a figure that doesn’t include those who are passing through from Hollywood to Beverly Hills.

If you head to work between 7:30 a.m. and 8 a.m., there will likely be fewer than 2,000 commuters, about nine percent of the daily total, meaning your trip may be much faster.

While the time it takes you to drive or ride to work depends to a great extent on the distance you have to travel, an earlier commute might move you out of that 53 percent of WeHo residents whose commute takes from 30 to 90 or more minutes each day. As grim as that total sounds, only five percent travel for 90 minutes or more. Twenty percent have a half-hour commute. A lucky one percent travel from home to work, and back, in less than five minutes.

West Hollywood residents aren’t especially keen on public transportation, the use of which would obviously help curb traffic congestion.

The ACS data shows only six percent of the city’s working population uses the bus or city shuttle. That’s the same percentage as those who walk to work. Four percent carpool. Two percent bike or ride a motorcycle or take a taxi. And a whopping 71 percent drive a car by themselves. 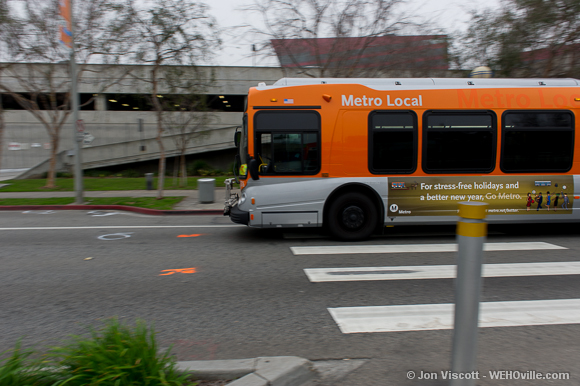 There’s an interesting and unlikely correlation according to ACS data between the mode of transportation that we choose and our income. According to ACS, those who bicycle or drive a motorcycle or take a cab to work have an average income of $40,769 (maybe they’re all taking cabs?). Those who drive alone are the next most affluent commuting group, with an average income of $36,441. And those who take the bus make, on average, only $18,543.

People who work from home not only the avoid the hassle of traffic and save money on gas, they have an average income of $50,797. Breaking that down further, the ACS data show that less than one percent of residents earning more than $75,000 a year take the bus, while they make up 20 percent of the commuting population.

There’s also a correlation between mode of travel and race and ethnicity at all times of day (i.e. not just during a commute). The ACS data show that 68 percent of West Hollywood residents who identify as white say they drive alone while 37 percent have taken public transportation (some people do both). Among the city’s small Latino population, 73 percent take the bus while only 30 percent drive alone.

While the bus may be cheaper and more environmentally friendly, sadly it’s not the fastest way to get to work. The data show that average bus trip is 51 minutes while the average for a driver alone in his car is 30 minutes, although once again, the length of the trip is also a factor.

Page 4: How WeHo Residents Get to Work

what a joke this piece is, and some of the comments are insipid. really, Stockholm? a trolley to no where. the trolley system, or lack there of, is a result of decisions and trends coming of age 60 years ago. business hours are 9-5, not 6:30am to whenever you think you should go home. charging people to drive their car into a town? there would and should be a revolution, and maybe then, some of you socialist nationals might actually come to understand a market economy. that would be the only economy that works and builds wealth and lives, and… Read more »

luca d – I’ll just add the point that socialism is generally defined as the government providing services to all citizens for free, which is exactly what we have right now with the roads. A system in which people have to pay for what they use (which is what I was proposing) is often referred to as capitalism or neo-liberalism.

Yes, to SaveWeho and Brian….how creative to use the medians for either a trolley or monorail or some other PRT (personal rapid transit)….remember Nick Garzilli who ran for City Council, that was his platform. Sounds too futuristic? well, don’t look now but the future is NOW! Why our city chose to remove the reamining trolley tracks when they “beautified” SMB is beyond me….serious lack of planning if you ask me.

Two of the main problems concerning the major traffic jam that hits Santa Monica Blvd is the area between La Cienega and Doheny. Traffic signals that treat minor side streets like major intersections, way more pedestrian traffic crossing the Blvd. (24 Hour Fitness & Starbucks for example) and unnecessary street blockages (between Ramada and Trader Joes) that force traffic onto Santa Monica Blvd. If that blockade was removed most people would use that street to get up to Holloway to get home (me). I avoid the Blvd as much as possible now…its ridiculously SLOW!

The problem is that everyone who drives thinks only about how long it takes them, and not about all the hundreds (or even thousands) of other people that they’re inconveniencing by putting their car on the road. If you get in a car at any time when the road isn’t totally empty, you’re causing 2 seconds of delay to every single person behind you. And yet none of us thinks twice about it. And that’s because we give away the road space for free! (At least, we do to anyone who’s rich enough to own a car.) We charge people… Read more »

Are you sure this story wasn’t meant for April 1st?????

Agree with Brian above. Just 16 years ago city council elected to take out the trolley tracks in favor of a huge grass median that serves no purpose other than to be pretty. The problem with the busses? It’s not only the low numbers riding them…but they significantly cause back up with their stop-and-go and you get a line of cars behind it. The solution? Get the mass transit OFF the roads. If you don’t want a trolley…ever heard of a monorail? You have the grass median that is city-owned. Put a nice Disneyland Monorail down the center and you’ll… Read more »

We used to have something running down that pretty center median called a trolley. The Pacific Electric cars took millions of people up and down SMB for decades. Now we have MTA buses using the same lanes as many more automobiles. Twice as many red lights and pedestrian walkways also slow the flow. So much for progress.

You have hit the nail on the head its about Balance of traffic and travel times. If the bulk of our own residents are gone by 10-11 am where do the rest all come from and go? Do these stats suggest that all cars on SMB are residents and all travel the same direction? Now if we could add all the area, medical, beauty, design, professional, school, retail, entertainment, restaurant, bar, special event,and shopping trips we might have something. Census alone dose not really cover whats happening. I happen to work from home but still care about the area quality… Read more »

You might be correct about it being overbuilt, but what makes this data a crock? My ex used to leave for work at 10 AM each day, and got there twice as fast as anyone else.

What a crock. Maybe if Weho wasn’t so ridiculously overbuilt, under planned and driven by greed it would be possible to actually drive through it.