A pair of colorful angels wings, part of Colette Miller’s “The Global Angel Wing Project,” until recently adorned the Palm Avenue wall of L.A. Optometric, an optometry clinic and glasses and frames shop that was opened by Dr. Robert Dirksen about a year ago.

About five months ago Dirksen commissioned the West Hollywood installation, one of more than a dozen such installations by Miller in cities as varied as Los Angeles and New York and Nairobi, Kenya, and Juarez, Mexico.

Like those in the other places, the Palm Avenue “wings” caught the eyes of passersby who would stop for a quick photo of themselves standing between the wings and then post it to Facebook or Instagram. Dirksen said that Hollywood tour buses would stop on Palm so that their passengers could get out and have their pictures taken with the wings as the backdrop.

That is the purpose of the installations, Miller says on her website. According to the Los Angeles-based artist, “the interactive wings are to remind people that we can be the ‘Angels’ of this earth … I hope they are a symbol of peace. There is enough greed, anger and bitterness on this planet. We can be the Angels on this earth. We NEED to be the Angels on Earth.”

A sign in the Optometric window emphasized that and provided an Istagram tag. “We all have a part in making the world a better place,” it reads. “We have the opportunity to be ‘angels on Earth.’ Take your picture and share your commitment. #WeHoWings.”

But the angels (or at least the wings) took flight this week when Dirksen was asked to remove them by the property’s manager. That is Chuck Dembo, one of the best known in the local property management business. In an interview with WEHOville, Dembo denied rumors that one of the property owners demanded the angel wings removed. (WEHOville was able to identify only one of the owners — Patt Dee Hoffen of Los Angeles.) Dembo said he remembers when there were outdoor angel images all over L.A. (the City of Angels). “I thought it was cool,” he said. But Dembo said the landlord had only agreed to let the Miller installation be temporary, and that after five months it is time for it to come down.

So Dirksen and his staff, when they aren’t doing eye exams and fitting stylish glasses, have been outside on Palm scrubbing and grinding away the angel wings. Removing the wings is more work than installing them appeared to be, Dirksen said. In an effort to console the many fans of the wings, Dirksen posted a sign on the wall where a pale shadow of the wings still exists:

“It is with great sadness that our landlords have informed us that we must remove Angels Wings by the end of the week.

“Please remember that things of beauty are temporary and that we must cherish them while we can. We still have the opportunity to be angels in this world, help to make this planet better for everyone. 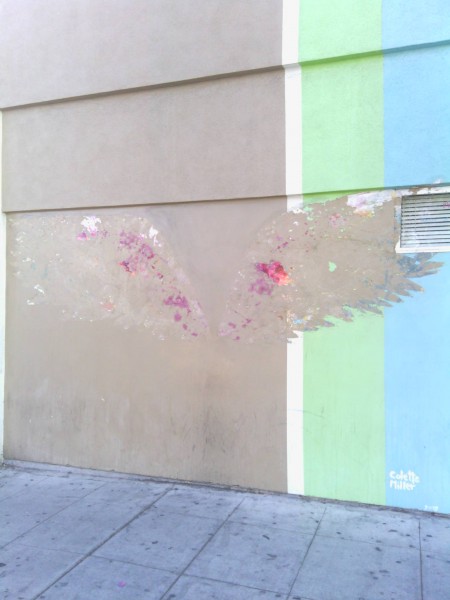 (Take a look at some of the West Hollywood Angel Wings installation’s fans on the following pages.)

Someone should stand in front of that wall with a set of wings and charge for a pic. No, Angelyne, not you.

what a shameful landlord. weho city hall should find a location where they will be more appreciated and enjoyed for a long time. BUELLER…..BUELLER?

The wings were a tourist attraction with a popular hashtag bringing visitors to West Hollywood (to her building) to take photos? Sounds like the worst business move ever, now it’s just a wall. Sounds like a missed opportunity. Lol

But WHY did they want them removed???? Idiotic

Congratulations, Patt, you are now the modern day, George Mitchell….”get off my lawn, Dennis”…. You are a wonderful corporate neiborhood civic citizen!….Not!

Oops….I meant to write that the property owner should let the art be permanent. Sorry!

I think the property owner should be permanent. Let’s find a way to make business property owners place things in our community or pay a price. I’ve been here for over 20 years. Even if you’ve only been here 20 days, we can have a voice. Down with extortionist landords!

I’d LOVE to see them as a PERMANENT commissioned piece on the library building! (Much more meaningful than the graffitiesque “art” that adorns the outside walls now–especially the south wall.

so sad to see it go! I loved these wings, i live right across the street so it’s a cute scene from my window.