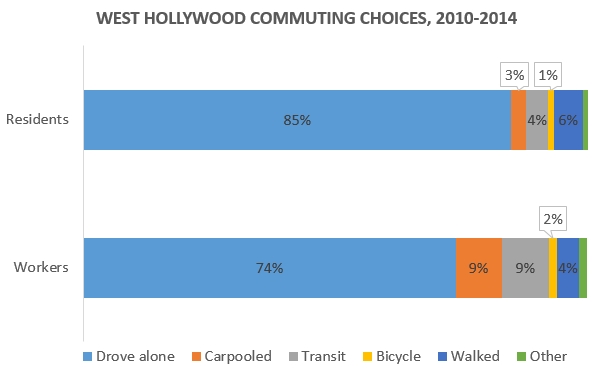 Most of the car commuters drove to work alone: 85% of residents and 74% of workers. The other car commuters were carpoolers. There were three times more carpoolers among West Hollywood workers (9%) than among residents (3%).
The differences between residents and workers went beyond carpooling. When compared to residents, workers were twice as likely to use transit for their commutes (9% versus 4%). The numbers also suggest they were more likely to bike to work (2% versus 1%).

WeHo by the Numbers also compared West Hollywood’s commuting choices to those of residents in Beverly Hills, Culver City, Los Angeles, and Santa Monica. The estimates were based on the same survey period, 2010 to 2014, and excluded residents who worked at home.

The 85% of residents driving to work alone in West Hollywood was significantly higher than the 78% in Santa Monica and 71% in Los Angeles. It may also have been higher than in Culver City and Beverly Hills, but the survey’s margin of error makes it hard to sure.

West Hollywood’s commuting choices also differed from some or all of the other cities in carpooling, transit, and biking to work. To find out more, please see the Weho by the Numbers article: How does West Hollywood commute?

Randy, you made a very good point and I appreciate it. You and I are on the same page for sure. Bottom line, we will NEVER get everyone out of their cars, however, with the City building a bonafide train system, I believe a decent percentage of people will get out of their cars and use it. That Sir, is a win-win. And, as Los Angeles continues to develop infill housing, mixed uses, etc., you will see more people using mass transit. No doubt that Los Angeles started LATE, however it’s happening and it will get better. Appreciate your response!

Larry, I’m an avid user of public transit (as well as a bicycle), and support its use. But its just not realistic to compare Los Angeles to Manhattan, or even Paris or London. Los Angeles is MASSIVE. The distance from West Hollywood to Downtown, alone, even without traffic is over 9 miles. Over 11 miles to Santa Monica. I know people who live here who have to commute to these locations daily. I agree that we need more mass transit, and definitely a subway line. But if its an above ground bus, and you are stuck in traffic with all… Read more »

Jim, the congestion is already here and has BEEN here. We desperately need a great mass transit system for all of us here in Los Angeles. Manhattan is an awesome place, if you’re a fan of awesome cities. West Hollywood is different than the Greenwich Village in that WeHo has major arterials running through it and that’s just a fact. There is nothing we can do about it. Bring on the mass transit and mixed-use, it’s the only way.

If you like the density and congestion of Manhattan, Paris and London, yes build more mass transit like Larry Smith says. But at least we’ll still have “the most beautiful weather in the United States”.

After reading all of the above responses, I realized that everyone who wrote in other than Mr. Dolan’s comments truly have no room to bitch about the traffic since they are all a major part of the problem. Los Angeles has been far to large to not have a transit system that was convenient for everyone i.e. Manhattan, London, Paris, etc. Los Angeles is building it FINALLY and it’s going to be a while before it get’s to everyone. With the most beautiful weather in the United States, WHY are we in our cars more than NOT? It’s time for… Read more »

This only emphasizes the need for light rail, high speed mode of transit either underground of above. The key is multiple stops from Doheny to La Brea and connections to the subway or other mode of transport.

This is the game changer, and my household hope to see these solutions come sooner than latter. We would gladly leave our car for easy access to transit hubs throughout West Hollywood

I like mass transit. But only so that others will use it and I can have more of the road to myself.

wow, i sense some serious envy in the comments posted. for good or bad we are a car city, and can’t imagine what cataclysmic event could change that. but, i’m afraid nothing but an attitude adjustment will shake the piety and angst from people who look down their nose at someone, perhaps anyone who happens to live well, as though that person didn’t earn their right to live or drive where and what they choose. can we really have a red line trolley down every street and avenue? that presumes that you are still willing to work after everything is… Read more »

oh – you got my message wrong. I wanted and had all that I thought I wanted. I became much happier choosing not to have the flashy car (though at the time, they were not ‘flashy’ but a part of what was my professional career status – that’s what we all did) I do think there is a silly about above which anyone would say – really? My anti-Maserati feelings was just – I don’t get it. If I were buying a car in that price range, i would never choose the reboot of the Maserati Brand. And I was… Read more »

REASONS: 1. Given how expensive it is to live in weho (well paid working professionals) in general are very big on talking PC and Driving Range Rovers et al. 2. Well paid working professionals who can afford a home/condo on the west side of weho, does not work 9-5 and probably have crazy or entitled hours without absolute arrival and departure from their ‘job’ 3. Believe it or not, Despite our Bus Depot, and the Huge Number of Buses driving through weho, due to the strange street layout, unless you work in bh or century city (which actually is not… Read more »

This will never change no matter what else is available. Residents and workers and visitors want to have their car and their own space.

Maybe if light rail or subway came anywhere near weho that number would be different….