It only takes 80 seconds (although in real life it took a little more than two years) to watch West Hollywood’s innovative new parking structure go from start to finish.

The time-lapse video posted above shows construction beginning on the site behind City Hall and facing Sweetzer Avenue. That’s where 66 parking spaces have been replaced by a building opening tomorrow that will house 200 vehicles.

The structure, popularly known as the “robo garage” because of its automation, is the first municipal project of its kind on the West Coast. The garage operates like a valet system, with a driver pulling into an entry bay and getting out of his car, which the automated system then takes and parks in an available space.

The garage contains four entry bays features a large glass window facing east toward Sweetzer where people can watch as mechanical shuttles carry vehicles in and out of bays. The design includes roof-mounted photovoltaic solar panels, use of a sustainable material made from recycled grocery bags and drought-tolerant landscaping. There also is a fixed art installation by artist Ned Kahn, whose concept consists of a grid of large glass marbles that will reflect the moving parts inside the garage. Adjacent to the garage, and just behind City Hall, is a community patio.

Some critics have questioned the $18 million cost of the garage, suggesting it is being paid for out of the city’s General Fund. In fact, the city issued over $20 million in bonds, and money from the General Fund and from parking sources such as garage parking charges will be used to pay for construction of the garage, repairs to Sweetzer Avenue and other related work.

The garage opening ceremony, to which the public is invited, will take place from 5 to 8 p.m. tomorrow at City Hall, 8300 Santa Monica Blvd. at Sweetzer. It will feature comments from members of the West Hollywood City Council at 6:15 p.m., and representatives from the design and construction firms who worked on the $18 million project will be in attendance. Refreshments, including food from restaurants in the Center City, will be served, and there will be a music mix by DJ Derek Monteiro.

The celebration will include hosted tours of the garage exterior with groups of event attendees entering the parking bays to view artist murals located within them. Event parking will be available at the Kings Road parking structure, located at 8383 Santa Monica Blvd. at Kings, two blocks west of City Hall. 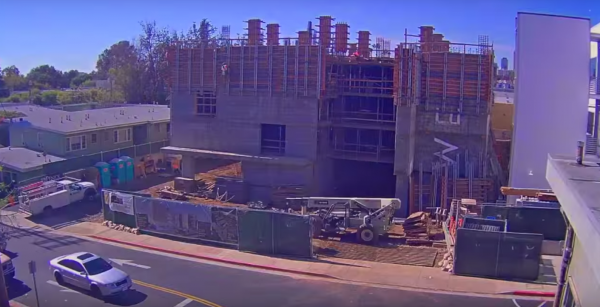 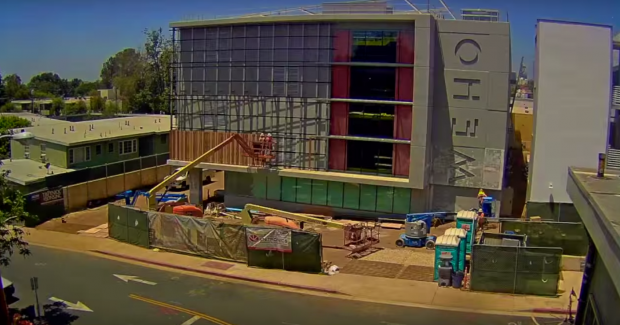 200 parking spaces at a cost of $18m? That’s $90,000 per spot which is quite steep (more than double) for a parking spot. Sure this serves public good by reducing footprint per parking space but it’s a steep price tag to justify and doubtful it could be implemented on other projects without public subsidy.

Opps, In my above comment the word ‘speed’ should read ‘spread.’ It’s impossible to speed throughout the whole city. Sorry.

The first of its kind on the West Coast and in West Hollywood. State-of-the-art, with hopefully more to come. The plaza is a great and useful addition to our Public Facilities and community. What an impact this structure will have on local businesses and our economy. Great vision, excellent addition. Progressive approach to our parking needs and hope many more for the future. Surrounding small businesses will be the recipients of the added parking and patronage to that this robotic garage brings. Look out commerce, your about to have a uptick. The benefits to our special events and visitors will… Read more »

I pass this site while cycling home from work. While an attractive building, one wonders how it will pay for itself. If the city is borrowing at three percent, the garage will need to generate something like $75,000 monthly for the mortgage alone, or about $375 per spot, plus ongoing maintenance costs. I’m sure that the building was “necessary,” whatever that means, and the spaces are already filled, justifying its existence to its backers. On the other hand, if we ask how and why our car culture continues, we need only look at projects like these, which continue to facilitate… Read more »

This is a smart parking solution and a great looking structure.

Forgive me but this article reads like the city brochure and implies that those who criticize the price tag are merely misinformed. Fact is that this project was sold to the public as costing $12 million and including a “Community Service Center” on the top floor with meeting rooms for the public. Cost overruns that substantial and elimination of major features as well as the lack of disclosure on operational costs ($500.000,00+ / year) should not go unmentioned. Neither does this article mention that there have already been substantial delays the first week of operation with city hall staff and… Read more »