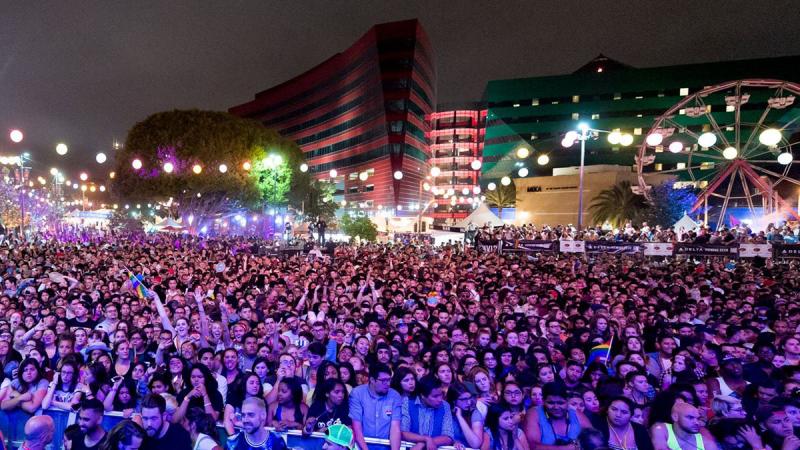 UPDATE:  CSW board member Craig Bowers has informed WEHOville that the Pride parade and festival will not move to Melrose Avenue.

Bowers said the parade will remain on Santa Monica Boulevard.

“We are not shifting the Festival to Melrose Ave.,” Bowers said in an email. “More precisely we have asked to use the space at the intersection of Melrose and San Vicente for the Festival.

A proposal to shift the annual L.A. Pride parade and festival to Melrose Avenue is getting opposition from residents of West Hollywood West, the neighborhood that will be adjacent to the proposed route.

In a post on Facebook, the West Hollywood West Residents Association is asking its members to appear at Tuesday’s City Council meeting to speak out against the move.

“The event’s producer is proposing moving the Pride event down to Melrose Ave from Huntley to Robertson and south on San Vicente to Rosewood,” the WHWRA post says. “The area along Melrose Ave may include music festival stages. The West Hollywood West Residents Association is opposed to this, or any other festival, being positioned in such close proximity to our residential neighborhood.

“The yearly suspension of our permit parking for three days and nights during this event is already a parking burden placed on our neighborhood. The addition of a Melrose Ave closure for this festival will bring us further negative impacts such as noise, cut-through traffic and greatly impact resident’s ability to access their homes on both sides of West Hollywood West.”

According to a report from the city’s events planners, the shift of the annual event from Santa Monica Boulevard to Melrose Avenue would allow Christopher Street West (CSW), the non-profit that produces the annual event, to continue offering three major music stages during the Pride festival. The Pride event in the past has located the music stages in West Hollywood Park, much of which will be closed during its multi-million dollar redevelopment. The report says that CSW is negotiating with the Pacific Design Center to use part of its lot.

Visitors to this year’s Sunday parade may see other substantial changes. There is a campaign underway to turn the parade, which typically features floats with go go boys and music as well as those sponsored by businesses and LGBT organizations, into a march and rally protesting feared erosion of LGBT rights since the election of Donald Trump. That campaign is being organized by Brian Pendleton, who has joined the CSW board of directors.

According to the report, CSW also is reducing the festival to two days — Saturday, June 10, and Sunday, June 11. In the past the event has begun on Friday night. However the annual transgender event and Sizzle, the sober event, will recur on Friday. The city is proposing that the annual Dyke March begin at Sal Guariello Veterans Memorial at Santa Monica and Holloway.

This is a horrible idea, and would def impact the businesses on Melrose in that area. Not enough room, either. It’s not just whining, it is poor planning.

Any closure of Melrose during Pride is misguided. The lack of consultation with WHWRA appalling. There has been plenty of time to consider alternatives due to Park construction. For three days West Hollywood West gets the worst side effects of the Music Festival. Three days of no parking, dangerous, anxious drivers roaming our streets and the early morning music penetrating our homes. Any Melrose blockage will divert even more event traffic into our already impacted neighborhood. It will greatly limit resident access to their homes on both sides of West Hollywood West. Council needs to fully address the central problems… Read more »

Sounds like whining…and a lot of it. Maybe I’ll invite 90069 over to my place this year so he can see the impact it has in my neighborhood -public urination (last year on my front gate), the trash, and the music that goes on until past midnight each night. My point was that we’ve dealt with the impact of Pride, Halloween, etc. and while I support those events and would like to have them stay here in West Hollywood, it would be nice if our neighbors to the south put up with a little inconvenience for once and had these… Read more »

Thanks for the clarification “90069”. I’m glad you say there are no impacts north of the festival…….Tell “JJ” that.

But south of the festival there are impacts. Many residents have accepted some of those and others never have……The addition of a Melrose closure for at least three days and nights is an added burden on the neighborhood that should be avoided.

We’re not whining “JJ”, we’re just expressing a legitimate concern…….Just like you do sometimes……Keep it up.

I live a block north of the Pride Festival and it does not create any issues. Those complaining are overly sensitive and/or irrational. The loud music is not going on all night – I think it ends and midnight and the street closures are typically minimal and easily avoided. Many WHW homeowners are just outraged they bought homes in a desirable community that was made desirable due to nightlife and gay culture and now are raging at that very thing – sad! However, I would support spreading Pride out and utilizing Plummer or Poinsettia Park as well as WeHo Park.… Read more »

and they whine a lot!

Manny, I realize SM Blvd is open during PRIDE….I’m just saying that the neighborhood north of SM Blvd is more impacted by all the events (parade, festival) than the neighborhood South of Melrose (not to mention Halloween!). I think they should have turn a feeling the brunt of it for at least a year. They’re nothing special but get a lot of attention every time they whine.

West Hollywood, our pride become just one more weekend of drugs, alcohol and sex, we must remember the reason we started those pride all over the world. it was to send a message of love not a party or music. it’s no better time as we are facing today to go to basic. let’s stop the “party” and send a message to the world, All our lives matter. seeing all the “trash” doesn’t do us any good, it’s all about MONEY. So, as we all know we got enough parties every weekend, let’s have activists stand on stage and show… Read more »

CSW should not be subsidized or accommodated by the city or our neighborhood until the current board (the one responsible for the recent ‘music festival’ rebranding failure and the incompetent deficits) is replaced and the former board that resigned (the ones responsible for the resounding prior success and surpluses) is reseated. The current President and what remains of the board have lost the confidence and support of our community. And their demand that board members of this publicly funded non-profit sign secrecy agreements has only made matters worse. They must go. And the city should not prop CSW up financially… Read more »

Complaints, baseless or otherwise, neighbor against neighbor are dissapointing and unproductive. Concerns about Pride function are symptoms of a much larger philosophical issues underlying the Event. Go-go boys on buses…..well, that’s an ancient historical artifact at this point. There are far more serious Pride Event issues to grapple with. CSW conducts the event according to City Council’s direction. So the serious thinking has to be at Council level or an appointed committee who have the ability to think very deeply about the future of Pride. It obviously hasn’t been done yet. It’s a very difficult question, because there has been… Read more »

Allison, it has nothing to do with being “special” or owning our homes. The neighborhood has borne the impact of the festival for years. Now, with this proposal the impact will be even greater. As Manny said, in the past the stages and the amplified music were confined to the park, not within feet of homes. In addition, Norwich is a one-way street with access ONLY from Melrose. With Melrose closed for three days, how will residents access their homes? What about emergency vehicles? It seems that an alternative can be found; David Reid has offered some great suggestions.