Many residents along the 1.8 mile stretch of Fountain Avenue within West Hollywood’s boundaries like to think of it as a neighborhood street. But apparently that’s not the way Fountain is viewed by most of those who drive on it.

The report is now in draft form as City Hall seeks input from the Transportation Commission and others before making final traffic safety recommendations to the City Council. It is the result of an outcry from residents on Fountain about traffic accidents, including the death in September of last year of Enrique Lopez-Nava, who was hit by a car when crossing Fountain Avenue on foot.

According to the report, Fountain Avenue from La Cienega Boulevard to La Brea Avenue carries between 30,000 and 40,000 vehicles a day. While 66% of the drivers are commuting through WeHo, 20% are West Hollywood residents heading out of the city and 15% involve people stopping in West Hollywood. No more than 2 to 3% of vehicles on Fountain are going to and from a location in West Hollywood.

Where Are the Motorists Coming From?

During the evening rush hour, 27% of drivers on Fountain are coming from the direction of Fairfax Avenue and Beverly Boulevard and 15% from the San Fernando Valley. Another 14% come from other locations north of West Hollywood and 12% come from Beverly Hills.

Twenty-four percent of drivers on Fountain during the evening rush hour are headed to the San Fernando Valley and another 24% are driving to destinations north of West Hollywood. Eighteen percent are headed toward Fairfax and Beverly Boulevard.

There are “differences in travel patterns along different segments of Fountain Avenue. West of Fairfax Avenue, there is a greater percentage of people traveling to and from the San Fernando Valley,” the report says. “This is particularly true west of Crescent Heights Boulevard, which connects directly to the San Fernando Valley via Laurel Canyon. East of Fairfax Avenue, there is more travel to and from the north of city and Hollywood (north) zones, and local travel to the portion of the city between Fairfax Avenue and La Brea.”

Currently Fountain Avenue is an efficient travel route, with major delays only at the intersection at Crescent Heights Boulevard and at La Cienega Boulevard during morning hours, when there may be long lines of traffic at the stop light. However, some of the traffic safety recommendations may significantly increase delays at the intersections of Fountain with Crescent Heights, Fairfax Avenue and La Brea Avenue.

How Many Accidents on Fountain? 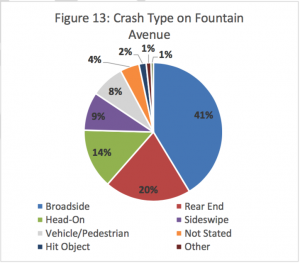 “As a result of that study, the city installed signage mandating right turns for vehicles at Havenhurst Drive during a.m. and p.m. peak periods. The intersection with Hayworth Avenue is the only location on the corridor with an unsignalized crossing of Fountain Avenue, and is the area with the highest number of collisions involving pedestrians or bicyclists (five).”

While morning and evening rush hours accounted for a third of all collisions, nearly another third (31%) occurred from 6 p.m. to midnight, which the report attributes in part to West Hollywood being a nightlife destination. Another issue is glare from the sun setting and rising during certain parts of the year.

The late night and early morning collisions often were the most serious. “While only 20% of total collisions occur between 9 p.m. and 6 a.m., all fatal collisions and 40% of collisions resulting in a severe injury occurred during this time period,” the report says.

How to Improve Traffic, Cyclist and Pedestrian Safety

— Add right -turn-only restrictions such as signs and traffic islands at the northbound and southbound approaches to Fountain from intersecting streets.

— Create corner bulb-outs, which are raised curb extensions that narrow the travel lane at intersections and thus reduce the crossing distance for pedestrians and also reduce the speed of turning cars.

— Improve pedestrian crossings at intersections without stop lights. “All unsignalized crossings of side-streets would receive a high visibility crosswalk to alert drivers that pedestrians may be present,” the study says. At some unsignalized locations along Fountain  the study recommends creating high visibility crosswalks, a pedestrian median island and pedestrian-actuated lights to alert motorists when pedestrians are crossing. Similar treatments are already in place along Santa Monica Boulevard.

“At locations that do not have left-turn pockets, the study recommends installing leading pedestrian intervals (LPIs), which provide pedestrians a several second ‘head start’ when entering an intersection compared to the corresponding green signal in the same direction of travel.”

It also recommends synchronizing the timing of traffic lights during off-peak periods to encourage vehicles to travel at the speed limit in order to hit green lights.

— Remove non-rush hour parking on some area of Fountain. “In most locations on Fountain Avenue, four travel lanes are provided with parallel parking throughout the day,” the study notes. However, due to the street’s varying width, there are several locations where off-peak period parking temporarily narrows the travel way from four to two lanes.” Having a consistent four lanes “would reduce the need for merging, which would improve vehicle flow and reduce the likelihood of side- swipe collisions.”

— Adjust intersection curbs along Fountain that now point pedestrians toward the center of an intersection instead of into the crosswalk and bring all curbs into compliance with the Americans with Disabilities Act.

— Move all bus stops to the far side of any intersection. “Far side stops make it easier for buses to pull fully parallel to the curb, which reduces instances where a bus may be protruding into the travel lane,” the study says. “Far side stops also reduce conflicts between buses and right-turn vehicles, and eliminate the need for pedestrians to cross in front of a bus, which can limit pedestrian visibility.”

Because Fountain and some of its parallel sidewalks are relatively narrow, adding left turn pockets at intersections would require eliminating some parking. “In locations where parking is permitted along Fountain Avenue on both sides of the street and along both approaches, installing left-turn lanes could lead to a loss of 16-20 parking spaces,” the report says.

Also, left-turn lanes could not be created at certain intersections without removing travel lanes because of the narrow widths at one or both approaches.

— Widen sidewalks. The city would be able to do that along some areas of Fountain only by converting 24-hour parking to off-peak-period-only parking, the report says. “Under this proposal, parking would not be permitted during peak periods (typically 6-9 a.m. and 4-7 p.m. on weekdays). During off-peak periods, parking would be permitted where there is currently allowed, but the number of travel lanes would be reduced from four to two across the corridor, which would narrow the travel way and encourage slower speeds.”

To widen sidewalks and make them comply with the Americans with Disabilities Act, the city could have to remove obstructions such as streetlight poles or signs. However, the study says, “sidewalk widening is considered a long-term treatment, and would require reconstruction of curbs and drainage” and moving utility lines underground.

The Fehr & Peers report recommends stages for implementing the recommendations. Those it recommends be implemented in the next six months involve intersections of Fountain with Havenhurst Drive, Hayworth Avenue, Fairfax Avenue, Formosa Avenue, Detroit Street and La Brea Avenue.

I completely respect your thoughts to make Fountain a safer place to drive. I live on Holloway which in my opinion has become the raceway capital of the world which includes if and when a person tries to cross the street at the crosswalk; close to impossible. Maybe the humps to slow drivers down would be an improvement both here on Holloway and on Fountain.

I concur with some previous strong opinions: West Hollywood is chuck full with corrupt and incapable people taking bribes and making back-door deals with questionable business and dealings. The fact the article starts pointing out a study in 2012 had already suggested what the current study confirms – shows that even more money was invested to merely attest that indeed the West Hollywood Freeway (Fountain) as we call it since the 80s was always known to be a “cut-through” route. Check how many times Fountain was used in business expansions and building code passes as an excuse to overbuild… if… Read more »

I was going to quote bette davis but your photo beat me to it!

@Mehmet Berker: Thanks for mentioning the bicycle brigade that insisted that THEY belonged on Fountain because they could. The Bicycle Task Force…… one wonders if they have been collectively hit in the head so many times that they feel impervious to danger therefore putting those in addition to themselves into the line of fire. “OH…..in Amsterdam we do it this way!”

@Steve; State law can be changed to accommodate safety issues at the discretion of municipalities. While speed is always a major issue, it has been exacerbated by life now expected to run at warp speed and the distractions of phones and other technology, not contributing factors in the past. It is the most elementary and common sense choice.

Imagine what the tree huggers spent on this study! West Hollywood is total joke and the most corrupt city in the USA!

I’ve said in previous articles, since age 16 at Fairfax High, Fountain was always a super fast kind of inner-city freeway. I’m 50 now, and stopped reckless speeding in my very early 20’s. But that was the commonly known shortcut through..

Traffic flows like water, if you cut off one path, it finds another.

Although safety is of utmost importance and it seems like this proposed plan address that, neighborhoods north and south of Fountain must be careful to not ask for “road diets” that will only bring more traffic onto their residential streets.

…….and remember, if traffic can’t get in or out, neither will you.

@slow down
State law prohibits arbitrary lowering of speed limits. There needs to be enforcement of the existing limits.

@mehmet
Road diets have a bad reputation in Los Angeles and only work where there are multiple alternatives. Like it or not, Fountain is a through street in West Hollywood. Nothing riles a community like traffic — just ask Playa Vista, where even the locals asked for (and received) traffic lanes back after a failed road diet implementation.

I think it’d be helpful to point out that there already was a plan to reduce collisions on Fountain and make it safer for all in WeHo. It was included in the draft of the 2017 Bike Ped plan presented to council last spring. At that meeting, it was City Council that removed the study and possible implementation of a roadway redesign that would have created a safer Fountain with left turn pockets at all intersections, shortened crossing distances for all crossings, increased space for sidewalks or bike infrastructure, and kept parking, and in comparison to whatever may be done… Read more »

I’m curious as to how they collected their data in regards to where people were coming from and going to etc.