The City of West Hollywood is finally going to celebrate the July installation of six sculptures in the grassy median of Santa Monica Boulevard between Doheny Drive and Almont Drive.

The official artist reception will be held from 11 a.m. to 2 p.m. on Saturday in the median. Present will be Kate Stern, who curated the exhibit, and artists Lita Albuquerque, Charles Arnoldi, David Buckingham, Brad Howe and Michael Kalish.

The exhibition is a collaboration between the City of West Hollywood and artists of the Frostig Collection, a not-for-profit organization. Frostig Collection engages well-known artists to create works for sale, with the proceeds going to support social skills programs at the Frostig Center, which was established to help children with learning disabilities, Asperger’s and high-functioning autism. The Center, based in Pasadena, provides an integrated program of education, community outreach and research that includes the 60-year-old Frostig School. 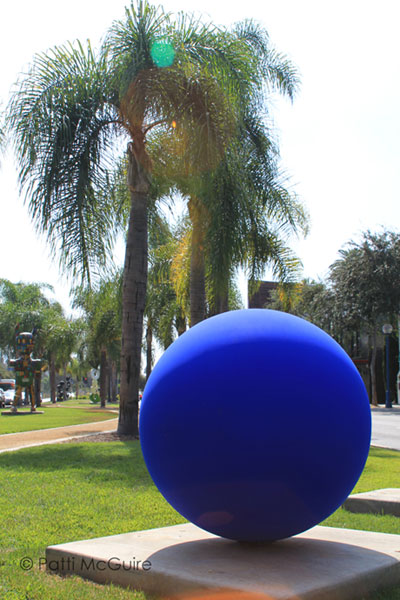 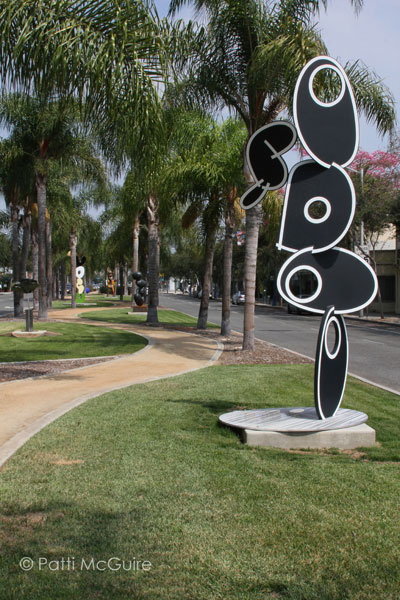 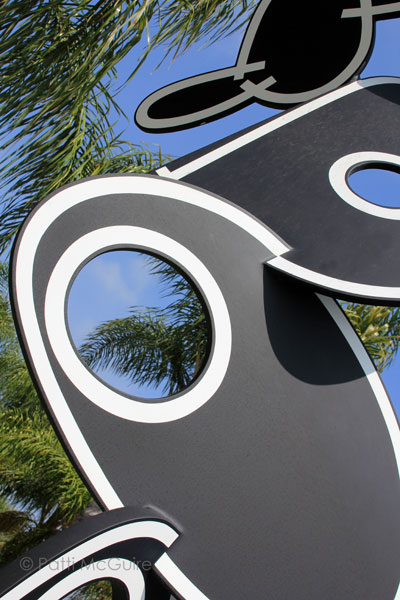 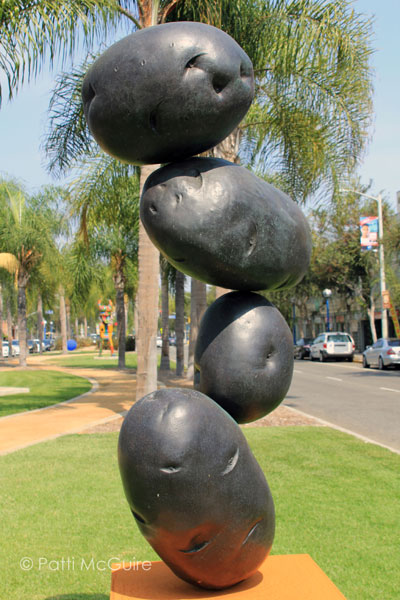 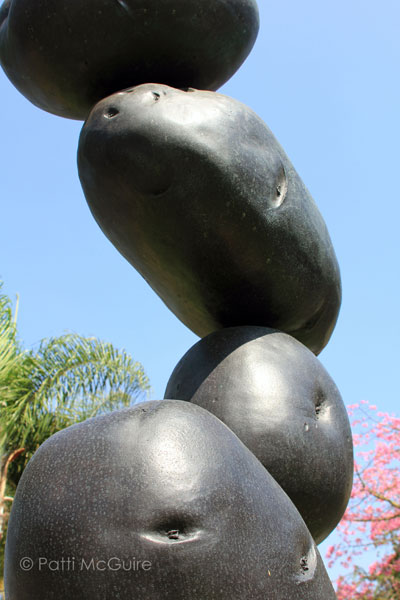 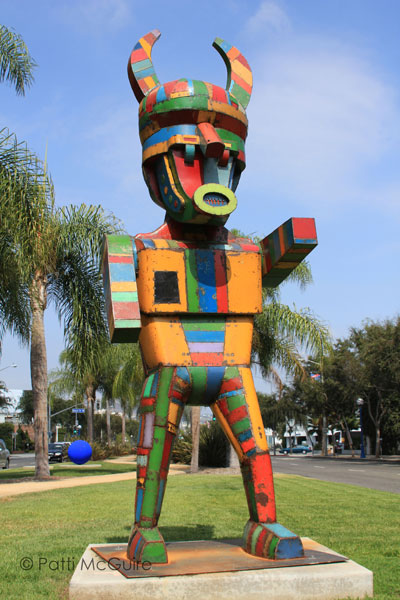 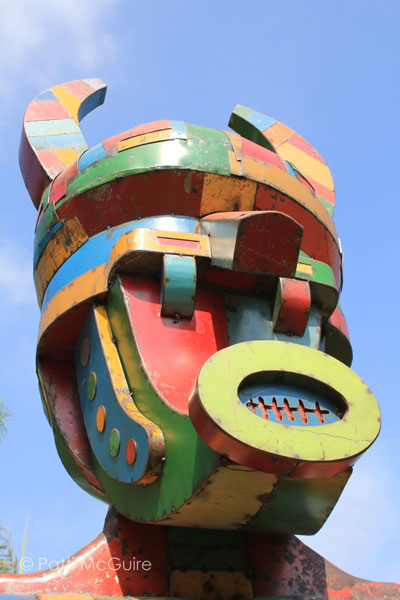 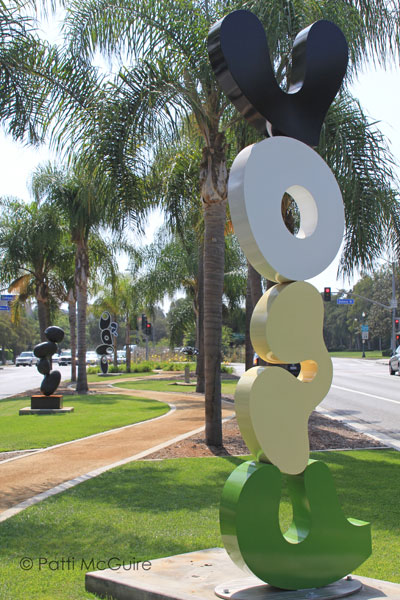 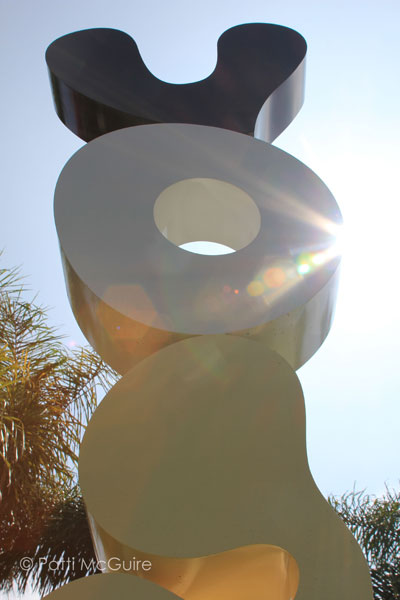 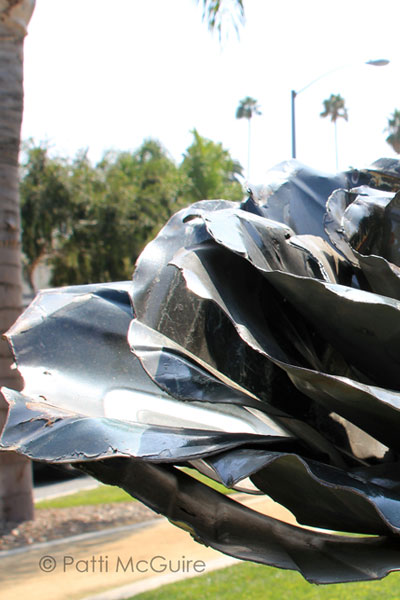 The exhibition includes the following sculptures:

PRETTY BOY by David Buckingham
Buckingham came to make art in a very unconventional way. In the early 90’s, while working as a writer and associate creative director in the advertising industry, Buckingham began his art education: a 5-minute welding lesson from Ray “Cowboy” Kelly, one of the founders of The Rivington School. After years of making furniture, Buckingham decided to make his first piece of art in 2002, a crude metal Easter Island-like mask. Three years later, he had his first solo exhibition in Santa Monica.

GIGGLES and SWEET MEATS by Brad Howe
Howe studied at Stanford University and the University of São Paulo in Brazil. Howe’s work is exhibited and collected all over the world. He is best known for his large installations, such as the 80-foot mobile at the Georgia International Convention Center near Atlanta and the 30-by-50-foot kinetic sculpture for Temple University in Philadelphia. Sweet Meats is on loan until the arrival of Venice Angel, a sculpture by Guy Dill, from Italy. Dill is a member of the Advisory Council for the Arts at Cedars Sinai Medical Center. He has received numerous awards, including the Stars of Design Lifetime Achievement for Art Award from the Pacific Design Center, the California Heritage Museum Artists Award and the National Endowment for the Arts’ Individual Artist Fellowship.

STANDING ROSE by Michael Kalish
Kalish attended the University of Rhode Island at Kingston and Kennesaw State University. Known for creating astounding wall sculptures and portraits out of license plates, he has been featured on CNN as its choice for “artist on the way to the top.” Equally impressive is the list of companies (Ford Motors, Disney, Atlanta Braves Stadium and Nike) that have commissioned Kalish to make large-scale works, based on his love of American icons.