[dropcap]W[/dropcap]est Hollywood gay bars offer a break from the mundane meat markets I typically find myself in on weekends. I imagine pre-gaming rituals for gay men are similar to that of straight women: Pop music blasting, perfume and hairspray clouds filling the room, various poses taken in front of the mirror, multiple wardrobe changes and so on. But for me, in a gay bar, the pressure is off. There’s no competition. No judging. For a change, I’m somewhat invisible.
[hr] 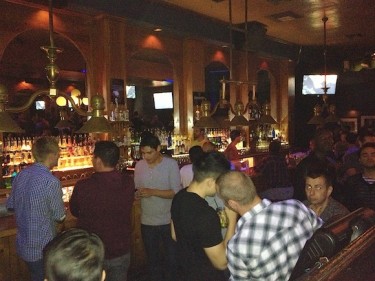 A young man in booty shorts and a black T-shirt with “Cocktails, Bitches” emblazoned across his chest sways to the beat of “Like a Virgin.” He sips his beer coquettishly on the sidewalk smoking area of Mother Lode as I flash my ID to the handsome blond doorman and wonder which team he plays for. Like a lost tourist, I meander through a crowd of average Joes in jeans three sizes smaller than my own. They are not especially handsome, in shape or trendy. It’s a dive bar with no expectations, and I stick out like a sore thumb in 4-inch heels.

A weathered balding bartender, easily pushing 50 amidst a crowd of 20-somethings, establishes eye contact with me but does not speak. As I pull out my Amex to pay for a vodka soda he lifts up the “cash only” sign and waves it in my face. I knew I shouldn’t have worn this purple frou-frou dress, thinking back to my 10 wardrobe changes earlier in the evening, which included a white wifebeater, ripped jeans and studded boots. My boyfriend’s voice still echoes in my mind: “Wait, are you trying to look like a lesbian?” This isn’t the dirty martini-drinking crowd. There are no martinis in sight. If the bar carried only whiskey and Pabst, customers would manage just fine.

Mother Lode is a different experience than I’m used to. For one thing, I don’t have to worry about alcohol-soaked legs and feet. The most attention I get here is from patrons asking me to please step aside because I’m blocking the pool tables. There’s nothing fancy about Mother Lode, no glitz, no glam, no one in drag. And that’s part of its charm. Unlike what I encounter next at Revolver, where mist fills the room and the smells of different colognes jumpstart my allergies, it’s straight boozin’ and shmoozin’.
[hr]

[hr]
Revolver on Saturday nightis where 80s music videos go to die, in style. Think George Michael, Whitney Houston, Madonna, Irene Cara. But no dance floor? (As if there’s enough room to even stretch your arms.) Though the tan, dreamy shirtless young bartender is slammed, he gives me a drink recommendation. And he’s not stingy with the pours. A pear vodkatini quickly turns into a 3-shot ordeal, and I’m dizzy trying to follow Jennifer Beals’s insane dance routine on the TV.

There are about five other women in the bar, one wearing a silk black tank top, gold long necklace and cherry red lipstick. Singing along to “What a Feeling,” she laughs, bumping up against her gay boyfriend. There’s an unspoken courtesy at WeHo bars, particularly at Revolver. Once a customer orders his or her drink, they back away from the bar so the next person can get their own dose of liquid courage. Perhaps to bust out some 80s dance moves. I’m with a girlfriend surrounded by a sea of good looking, well-groomed men in tight-fitting clothes. And no one approaches us. Plopping down on the lone seat in the room, I notice everyone has more energy than me. For the first time, I feel like “just a small town girl on a Saturday night.”
[hr] 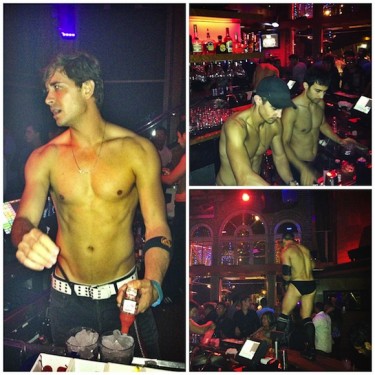 I stumble over to Eleven, feeling brave. Every song is my jam. There’s a hot Asian female go-go dancer on the stage, the first I’ve seen all night. I can do that. I make my way to a platform in the corner. The DJ is spinning “It’s Gonna Be a Good Night.” “Yes,” I scream, jumping up to show them what I’m working with. Halfway through the song I’m reminded where I am as a man pulls his leather coat away from my feet and says, “you’re too close honey.” In line for the bathroom, a pretty, petite 20-something girl makes small talk, asking what brought me here. “It’s that obvious I’m straight?” I reply. “Definitely,” she says.

Only two out of the seven male bartenders on duty at Eleven are gay. “It’s actually pretty skewed,” one of the gay bartenders shouts over blaring music. But according to him, gay bartenders get better tips. It’s nearly midnight, when most haunts in the area are famous for giving away free shots.

Four ripped bartenders jump on the tabletops, doing the pony dance from “Gangnam Style” in unison. The crowd whistles and roars, thrusting wildly. A female waitress makes her way through the dance floor with a plateful of pink shots and a can of whipped cream. She scoots her butt up onto the bar, pours a shot into another girl’s mouth then tops it off with a squirt of whipped cream. “Best chaser ever,” the girl moans, slipping a $5 dollar bill into the woman’s corset. I wonder if the sexy, alcohol-wielding brunette is straight or gay. I would even do her.
[hr] 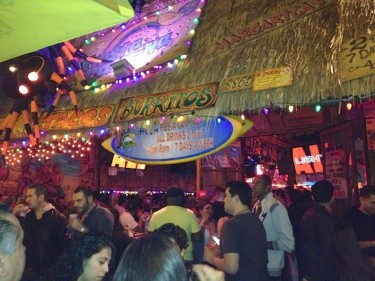 A host at Fiesta Cantina tells me that women are constantly grabbing his junk. “That’s kind of annoying,” he adds. “This is my body, and just because I’m half naked doesn’t mean you get to touch it.” There are more straight girls wandering around West Hollywood than one might think.

“Fag hags,” as the bartender refers to them as, come in hoards, dress really cute and get wasted with their friends. Happy hour here is packed. Buff bartenders with chiseled abs and attractive young women fling martini shakers wildly, pop open Coronas and shove crinkled dollar bills into their back pockets.
[hr]

[hr]
Bar hopping also means bathroom hopping. And you’ve got competition, as most of the bathrooms are unisex. The Abbey (restaurant by day, famous club by night) makes good with two security guards directing traffic. A smart decision when couples are trying to sneak into the stalls. But with the heavy traffic moving in and out, it’s a challenge to keep things tidy. You’ll find wet toilet paper shreds lining the floor, half empty drinks left on the sink and torn, makeup-stained paper towels thrown about. It’s the perfect spot for a bi-curious girl. Unlike other bars in the area, there are many more attractive women, dark corners, and unanswered questions.
[hr]

[hr]
Walking down Santa Monica Boulevard near La Cienega, I bump into a man in his early 40s walking solo. “I’m staying at the Ramada hotel,” he says in a thick Southern accent, pointing down the street. “Do you know where I can find a bar with a female bartender?” he asks, eye raping me. I smirk knowingly and murmur, “You’ve come to the wrong place buddy.”

The Abbey: Fuckable (if you can sneak past security).

Mother Lode: Grime and slime. Enter at your own risk.