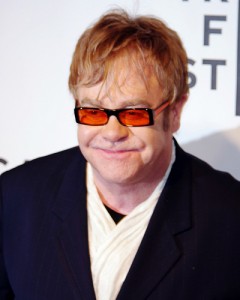 Elton John, a resident of West Hollywood until he recently sold his Sierra Tower condo because he freaked that his little boy might fall off the balcony, is number two on a list of most charitable celebrities compiled by Look To the Stars John supports 45 charities, including the Elton John AIDS Foundation, which funds 55 programs around the world. Annie Lennox is number one, supporting 36 charities and serving as a U.N. Goodwill Ambassador fighting HIV and AIDS. Former President Bill Clinton ranks third, followed by Bono, Brad Pitt, George Clooney and Angelina Jolie.