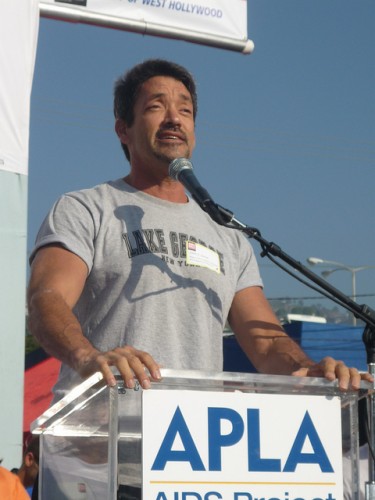 At West Hollywood’s Oct. 1 City Council meeting, Councilmember John Duran reported on his attendance at the United States Conference on AIDS that had just occurred in Las Vegas.

Duran brought a message of hope, optimistically stating that after 30 long years “we are planning for the final stages of the epidemic … we can see the light at the end of the tunnel.”

Duran went on to say “we have now learned that treatment is the best form of prevention. HIV positive people who are treated with the anti-viral medications now available have virtually no viral load which makes it virtually impossible for them to be somebody who can transmit the virus to another person.”

He went on to state that the city’s social service providers needed to re-calibrate their message. “Treatment should be the new form of prevention,” Duran said. “For years we said condoms, condoms, condoms, safer sex, safer sex, safer sex … ” Duran proclaimed that “the new message must be, if you are HIV positive, start your medications immediately, get your viral load down to zero, which makes it virtually impossible to accidentally or inadvertently transmit the virus to another person.”

That all sounded great, except I don’t know anyone in the HIV community who believes it to be true.

While Duran wrapped up his remarks, members of the audience were looking at each other. From the dais a couple of the council members seemed a bit surprised. When I was in the anteroom of the City Council chambers, people were asking if they had heard Duran correctly. The words “virtually impossible” to transmit the virus seemed to resonate with people in a very unsettling way.

Maybe after 30 years we are all a bit too tired and too cynical to allow ourselves to see the end of AIDS in this country. I was pretty stunned by Duran’s comments and I waited a few days for the city clerk to post the Council meeting online so I could watch the meeting again, just to make sure I heard him right. Duran’s comments start at minute 52:00 on the online video of the council meeting.

There are a number of issues that council member Duran got right, but he got the basic message all wrong.

Treatment should be primary. For starters, the new drugs work wonders, and they do reduce viral loads, which in turn lessens the potential for transmission of the HIV virus during unprotected sex. But people should get tested to save their lives. The secondary benefit of treatment is drastically reduced transmission rates; but that is not a logical strategy for prevention. Treatment is not a substitute for the exercise of safer sex.

To begin with, the medications don’t reduce your viral load to zero as Duran misstated. There is only one guy with a zero viral load, and he is over in Europe. He is considered cured.

Medical providers don’t tell HIV positive people that their viral load is at zero. A person who is responding to medication will find that his or her viral load can be reduced to “undetectable” levels. But those levels are subject to change. A person’s viral load can vary due to a number of factors, including failure to take the medications as prescribed. If your viral load changes over time, you can never be sure exactly when you might be in a position where it is “virtually impossible” to transmit the virus.

The notion that it is “virtually impossible” an HIV positive person can engage in unprotected sex and infect someone, is not an idea that has been endorsed by AIDS organizations.

The whole point of 30 years of safer sex education is based on the fact that people don’t have their HIV status tattooed on their foreheads. While having HIV positive people on meds is a wonderful goal, you will never have everyone covered. If the new normal becomes no condoms, then there will always be a risk of new infections by the untested. If there is one lesson we learned over 30 years, it is that safer sex works. While not infallible, it saved a generation before the advent of the current “miracle” medications.

The problem with focusing on medications as a “prevention” is that it relieves all HIV positive people of any responsibility once they are on medication. The message that treatment equals prevention means that you don’t have to take responsibility for your own behavior. It also leads to others simply assuming that they can’t become infected as all of their sexual partners are either HIV negative or on medications. That would be a dangerous assumption.

Encouraging unprotected sex is the predictable by-product of any campaign that tells folks that once you are on medication it is “virtually impossible” to transmit the virus. Not only is the “virtually impossible” message likely to be factually incorrect, it is not the basis for ending all transmissions of HIV.

While getting tested and getting treatment are essential, that is pretty much the same message we have been saying for decades, even before we had the current generation of anti-viral drugs.

While getting on meds is essential, it is not risk free. These are powerful drugs that have to be monitored. Over time there can be damage to kidneys or other vital organs. Furthermore, no one yet knows what the efficacy of these medications will be after 20 years of treatment. While we are incredibly lucky to be alive in these times, we don’t want to make light of becoming HIV infected.

HIV positive people who are being treated are far less likely to transmit the virus, but that does not prevent them from infecting or being infected by a host of other sexually transmitted diseases. There are new and scary forms of syphilis and gonorrhea that are stubbornly resistant to current medications. Anything that discourages safer sex is simply not a good idea.

Although I respect John Duran’s 20-plus years as an AIDS activist, he has a history of being enamored with the sound of his own voice, which often leads him to be less than accurate about facts. Politicians by their very nature are generalists, not specialists. Duran is welcome to inspire us with visions of the end of the pandemic, but he really needs to leave the creation of policy to the experts. Responsible leaders should know their own limitations.

While we are entering a new era when it comes to AIDS and HIV, our generation has buried far too many friends to be complacent about the future. We owe it to the younger generation to maintain our vigilance until we actually see a cure.

Steve Martin is absolutely right in this case. Duran is not qualified to be giving information and/or advice on such a life or death matter to the public, that is best left in the hands of scientists to disseminate through the media, and for doctors & other health care professionals to explain so people can feel confident with the advice & information they are getting, and not from a politically inclined person who simply wants to be heard. From all I have read & been told, there are no precautionary measures that can make the AIDS virus “virtually impossible” to… Read more »