How did you come to be a part of Legendary Bingo?
I was a special celebrity guest when I was on Nip/Tuck, I did an arc on Nip/Tuck for five or six episodes and they had me call balls. And then the Screen Actor’s Guild went on strike for a long time, and that summer I needed gigs and I replied to an ad and it was a good fit. I substituted for awhile, and now I guess I’m the girl who’s been here the longest.

When you aren’t here who runs the show?
Jeffery is in charge, of course. I’m just the talent.

Just a pretty face?
Just a loud mouth. But there are a couple of other girls, Calpernia Addams, Roxy, Porshaayy. 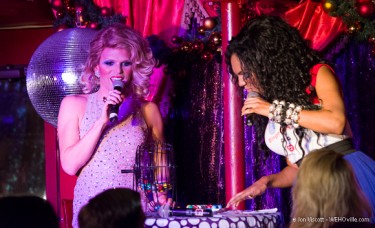 I was looking at your website, and I noticed you travel a lot, how often are you on the road?
I haven’t been in LA for a full weekend since … probably April. Constant. Nonstop. Strike while the iron’s hot, right?

What’s all the traveling like?
Hell on my skin. Great on my miles. And you know, there is great road dick out there. I get on Grindr and put up a picture of my ass and my face and they are like “Oh my god, it’s you! You’re the one who got disqualified!” And I’m like “Yeah, come to the show, let’s hang out.”

Not really, I have this whorey reputation so I play into it. But I’m not a whore … I’m a slut.

I know you have a fella, does it get lonely out there?
Nope. Ha! He just found my Grindr! Manila and I were talking about it, I used it to get people to my shows. My boyfriend found it and said “You’re on a hook-up site!” and I said “Babe, it’s social networking!”

It’s a friend-finding tool …
Exactly. It’s not like you can put up a picture of your asshole, you’ll get kicked off.

(Laughter) Yes. Okay, where do you like to be when you aren’t in LA?
Wherever my boyfriend is. I travel with him for his basketball games a lot. He’s on a gay basketball team.

That’s hot.
Yeah, he’s 6-6. You know it’s weird, when we were filming the reunion show (for RuPaul’s Drag Race) when I was talking they kept cutting away to this old man. The producers totally made it look like he was my boyfriend.

Do you like to travel?
I don’t mind it. I consider it a privilege that people want to see me and meet me. There seem to be only a few girls from each season who are remembered and from mine it seems to be me, Chad, Latrice and Sharon.

You have a new album out, “The Wreckoning.”
Well it hasn’t printed yet, I don’t have it physically. That’s why it says “please allow four to six weeks for shipping.” But the single, “Trouble” dropped yesterday. Logo premiered the video. 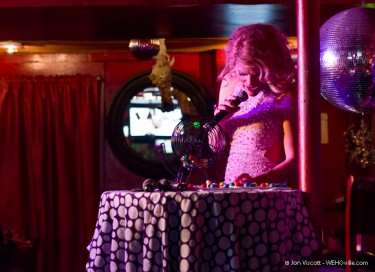 What was it like to record your first studio album?
It was fine, I’ve been recording for a while. I did back up singing on some albums, which was not gratifying. But I’m really happy. My first video “Trouble” was released Monday. I love the video. I love the song.

But I totally have a beard in it. I was really tan, and had to use makeup you are supposed to use on your legs on my face. Because it was the only tan make up I had, and I look so fucking gray … and brown.

I’m a huge fan of your “Chow Down and Chick-fil-a” video with Vicky Vox and Detox. How did that come to be?
Well, Vicky is fat, Detox loves fast food, and I’m really good at press. With our powers combined … We actually love to work together. We just did a five-city east coast tour, which was awesome. I had never eaten at Chick-fil-a, I grew up in the northeast and there were none when I was growing up. But Vicky and Detox took me, and while we eating they were telling me how Christian-y and evil it was. And I was like, why are we eating here? And Detox said “You’ve tasted it, it’s delicious.” So then we decided to write a song. And I said “let’s get famous. We’ll all have to work less hard if we get famous together.”

I love those girls.

You also did this amazing video during the recent election, “Real Women Vote For Obama.” How did that come to be?
Well, there is this amazing man I call my “Creative Director For Life.” His name is Michael Serrata. He’s a writer on Neil Patrick Harris’ show. He really helped me out with a lot of stuff I’ve done creatively …

Willam: Hi! I bet you wanna know where the bathroom is, don’t you? It’s behind you, turn around …

(To me)
I’m such an asshole. In fact you just think I’m being cute, but no, I’m really a dick. I hate it when people call me a “bitch,” ‘cus I’m not bitchy. I’m a dick. But people tend to like me because I tell the truth.

Yeah, I like that.
My boyfriend will say something romantic and I’ll say “So fucking faggy!” He’s always “Why would you say that?!” He’s like 6-6 and just a dude. He looks like a giant Nazi, he’s blond, and I feel like I can emasculate him so quickly. And I feel bad, but I’m sorry, I’m not that girl who hugs and cares.

You are a very talented singer dancer and actor. Why drag?
I like it. I’m good at it, so why not? What’s wrong with it?

There is nothing wrong with drag, I just want to know how you got started.
My first job was when I was 16. I submitted two pictures for an MTV pilot. One regular and one in crazy club kid drag. They asked me which one was closer to the real me and I said “The club kid one” and they were like “Good, we need people like you.”

Are there any Drag Queens you look up to?
Yeah, Leigh Bowery, RuPaul … I love Jackie Beat but she doesn’t give me the time of day.

Yeah?
Jackie just doesn’t need any more friends. And I’m at peace with that, you know? She’s nice to me. But I’d love to be her friend. I always feel like there is an in-crowd in LA, you know? Like, that crowd that Austin Young shoots; Jackie Beat and Mario Diaz and Selene Luna … that crowd. I’m not in that crowd, and I never will be. I always feel like a little dog nipping at everybody’s heels. So I figured it out, I’m just gonna do my own thing, maybe be a little mainstream and let them have their underground thing.

Are you involved with the new season of RuPaul’s Drag Race?
Do I look like I would sit myself in a wood crate and jump out of it? Like Shangela?

(Laughing) I don’t know, you could be a judge?
Ru is not going to let another Drag Queen on that panel. EV-ER.

(More laughing.) All right, Willam, thank you for your time.
Thank you.

HA Willam always with the beard excuses. Go shopping for the makup it lasts a year FFS.