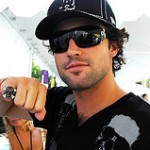 Brody Jenner ate some eggs and sipped a beer at Barney’s Beanery on Sunday (Nov. 4) according to People magazine. Jenner’s focus, according to other diners, was the football game on the screen. “Brody seemed very passionate about the games,” an onlooker told People. “He was sitting at the bar, chatting with two middle-aged men. His phone was face down, he didn’t seem to care about much else than the game.”

Jenner, son of Bruce Jenner and star of the reality show The Hills, also has made occasional appearances with his step-sisters on “Keeping Up With the Kardashians.”