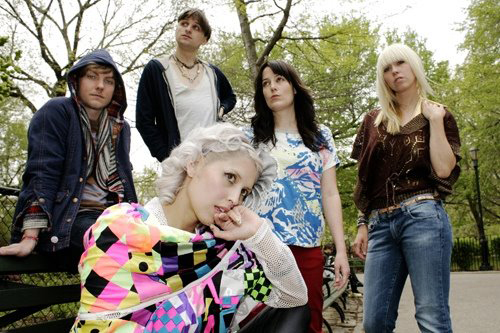 After a tense election week, you need a release.

Tonight, get in touch with your inner-child and embrace eternal youth with Tilly and the Wall, the spritely five-piece band that’s trekked all the way out from Omaha, Neb. to perform at the Troubadour at 8 p.m.

If you’re wondering, yes they adopted their name from Leo Lionni’s children’s book. And yes, they are full-grown adults who travel the country in a van to chant love, peace, and support amongst artists — and say things like this:

“What inspires me is the infinite nature of our own minds,” Kianna Alarid told WEHOville. “I meditate every day and work on exploring that endless abyss of consciousness since that is where imagination springs from and where all ideas originate.”

What else would you expect from a band that uses a tap dancer in place of a drummer?

Though the music may be bright, the lyrics often contain much darker undertones. Listen to Nights of the Living Dead to see what I mean. Rapid fire, staccato verses like the one from “Beat Control” remind me more of “Rhythm is Gonna Get You” by Gloria Estefan’s Miami Sound Machine than Vampire Weekend. But that is an exception. They often harness the same group energy of Edward Sharpe and the Magnetic Zeros or The Polyphonic Spree.

Conor Oberst of Bright Eyes has fostered Tilly and the Wall since they recorded their first release, Woo!, in 2002. Every Tilly album since has been released on Oberst’s Team Love label.

Alarid and Pressnall spoke briefly with WEHOville about the new album and creative exploration. The band is currently on tour in support of Heavy Mood, the new album recorded by producer Mike Mogis, also of Bright Eyes fame.

Alarid said of the album, “The theme that seems to be running through all the songs is embracing life, and seeing the positive despite the heavy mood that is surrounding us. And if you’re feeling the heavy mood, really feel it, and then use that energy and power to move forward.”

On the topic of creative inspiration, Jamie Presnnall offered, “Believe in yourself and don’t let anybody tell you no. Keep fighting for your art and yourself. When I was finding my own path in music. I felt so much support from other musicians, it’s so important to put that energy out there.”

You may dismiss them as Bohemian hipsters living in a fairy tale, but this band has some serious magic to offer.

Check back at WEHOville for photos of the performance.