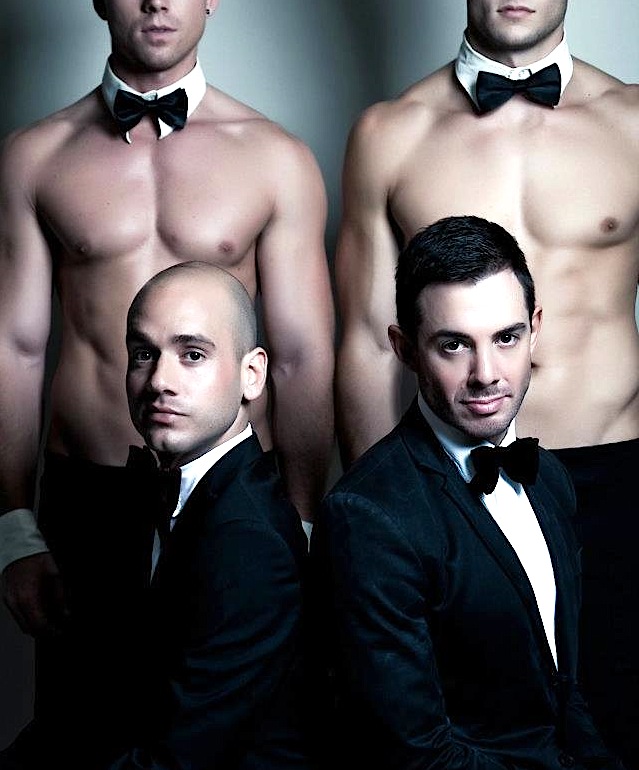 Nero is an Australian-born, New York-bred party promoter who made a name for himself in New York City at the original Mr. Black club as “the ass” — his pantless get-ups soon became a sensation, and the club’s claim to fame. Though he went to school for film and TV production and worked on a few shows when he moved to LA, he segued back into nightlife because he felt there was something “missing from the scene.” He conquered the West Coast with the LA version of Black three years ago and ended on a high note: the party said farewell with a “funeral”-themed event earlier this month at Bardot Hollywood. Despite his often-sexy attire and playful attitude, Nero has always had an air of sophistication about him that translates to his events.

Rigal got his start booking live nights at Bardot. He always knew he wanted to produce parties.

“Even at an early age when most of my friends were idolizing the latest pop star or sports figure, I was looking up to nightlife luminaries and impresarios like Steve Rubell and, more recently, Brent Bolthouse as these mythical creatures of the night,” he said. “I remember thinking how for one night these guys would create another world right out of their imaginations. I mean, how cool is that?”

Rigal, whose parents are Puerto Rican, comes from a family in the entertainment business.

How They Got Started:

Nero has been with Mr. Black since its inception in 2006 in Park Slope Brooklyn with its concept creator Stuart Black.

“I managed the club and became the infamous ‘ass-less’ waiter,” he said. “People in L.A. don’t realize that Mr. Black was a full-time club in NYC in the beginning with upwards of four nights a week. I moved to LA because I was burnt out, to tell you the truth. But ultimately Mr. Black’s run was not quite finished and the demand was there.

“Two years is normally my cap then I am bored,” said the Aussie who comes from a family of seven kids. “That’s the Sagittarius in me. But my first nightclubby job was at a cocktail lounge in Sydney called ‘Gilligans’ where I was allowed to be a supremo bitch and get paid for it. “

Rigal worked his way up in the talent agency biz (He spent two years at Creative Artists Agency overseeing live musical tours for acts like Green Day and Katy Perry), but soon found he wasn’t happy. A friend got him a gig booking Bardot, where he met Nero. It was a match made in hedonistic heaven, and it soon inspired him to throw his most successful event, the saucy outdoor hap, SummerTramp, a much-imitated parking lot-water park pop-up in downtown Los Angeles. The event was held at West Hollywood Park as part of this year’s L.A. Pride. Working together on Tramp solidified their partnership.

Though Rasputin has only been raging in WeHo for a year, it already tops most partygoers favorite fetes list thanks to its fresh approach to nightlife. Nero, who lives on the border of WeHo and Hollywood, and Rigal, a longtime downtown L.A. resident, have a gift for visual and aural stimulation and attracting a fashionable mix of patrons.

At Rasputin, the walls are lined with sexy, scantily clad dancing silhouettes. You can watch these James Bond-shadow-like figures (mostly fit fellas) all night, but the dance floor brings its own pleasures: Great bootie-bumping sounds courtesy of Josh Peace and guests, and maybe the most interesting mix of audaciously dressed, ambi-sexual scenesters anywhere. Jeans, tees and flip-flops need not bother entering … this is a party you dress up for; think “Hunt for Red October” meets Givenchy.

“We felt that while entertaining, the market was over-saturated with the same model of WeHo party night after night,” Nero said. “So our objective was to create an event that felt different than what was currently offered in West Hollywood. Cultural, sophisticated and sexual. We are riding the social media wave right now and it’s very exciting.“

Rigal elaborated, “By ‘model,’ we mean the tried and true go-go boy pop stereotype that people refer to when they think of West Hollywood. Don’t get me wrong; there is nothing wrong with that type of party. It’s just not for us or, we felt, a large majority of the Los Angeles LGBT scene. We created ‘Rasputin: Russian Love Machine’ with the intent of creating a party for all sides of the community. Like SummerTramp, we try and create parties that are blind to the imaginary lines and segregation of the LGBT community.”