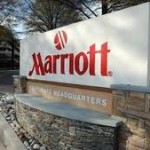 Marriott International has finalized purchase of a 1.37-acre lot at the southeast corner of Sunset Boulevard and Doheny Drive on which it plans to build a 190-room hotel.

The hotel will be the west coast flagship of Marriott’s Edition hotel concept, developed with well-known boutique hotelier Ian Schrager. Marriott has an Edition hotel in Istanbul. Others are being developed in Miami Beach, London, Bangkok and New York City. According to Marriott, the West Hollywood property has been approved for development of the hotel and residences with ancillary amenities such as restaurants, a night club and a rooftop pool and bar.

The sale was announced by Sonnenblick-Eichner Company, which brokered the $31.5 million transaction between Marriott and WN Sunset LLC.

This is disgusting. Each member of the City Council should be spanked with a paddle for approving a DEVELOPMENT AGREEMENT with the Marriott group. The City is profiting at the expense of Gay Rights. Bill Marriott, of Marriott Hotels, has assured company’s employees and guests that Marriott Hotels did not, as a company, contribute to the successful campaign to revoke the right of gay and lesbian families in California to marry. Bill Marriott has stated: “Neither I, nor the company, contributed to the campaign to pass Proposition 8.” Say it wasn’t your will Bill, but I suspect Bill Marriott, as… Read more »