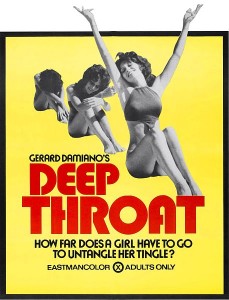 Harry Reems (Sept. 30, 1982). Reems, now 66, was Lovelace’s co-star in “Deep Throat.” Born Herbert Streicher, Reems started out in the 1970s with appearances in many short stag films. He appeared in more than 100 feature-length adult films between 1971 and 1989, including “The Devil in Miss Jones” (1973). After years of drug and alcohol abuse, Reems began a recovery program in 1989, married and proclaimed himself a Christian. He’s now a real estate broker in Park City, Utah.

Linda Lovelace (Dec. 20, 1973). Lovelace (whose real name was Linda Susan Boreman) died in 2002 at the age of 53, having gained a reputation far beyond her industry for her starring role in “Deep Throat.” That 1972 film, directed by Gerard Damiano was noted for having a plot and high production standards. Bans by local governments gave the film nationwide publicity. It attracted an audience of the culturally hip reputed to have included Jackie Kennedy. “Deep Throat” (and doubtless her permanent spot on Studs’ sidewalk) became objects of shame for Lovelace, who battled a drug addiction and eventually became an anti-porn crusader. 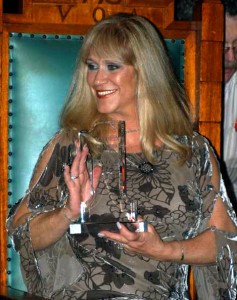 Jay Lawrence (Nov. 19, 1971). Lawrence is anything but an adult film star. He was a DJ at KLAC from 1970 to 1978, when the radio station had a country music format. He’s now a conservative radio talk show host for KTAR-Phoenix and a real estate agent. So how did his footprints end up embedded in front of Studs? Lawrence, who had had a few small film roles, asked if Grauman’s Chinese Theatre would honor him with a footprint in its forecourt alongside the likes of Gene Kelly, Frank Sinatra and Dean Martin. When Grauman’s declined, Lawrence hustled to what then was the Pussycat Lounge, which granted his request, giving both parties lots of publicity. See the other porn list

Their mothers must be so proud!