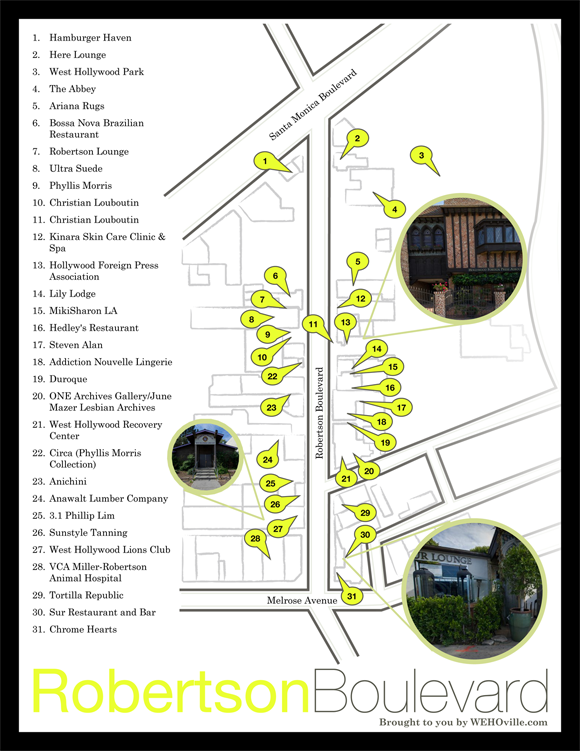 Come with us on an occasional Explore WeHo tour

[dropcap]S[/dropcap]mall as West Hollywood is, we residents can be mighty insular. Some of us spend our lives in the restaurants, bars and shops on Santa Monica Boulevard, rarely venturing north to the Sunset Strip or south to Melrose Avenue (most of which technically is not part of West Hollywood, but we at WEHOville are annexing it). Others of us know The Avenues, that enclave of chic fashion, art and interior design, but couldn’t imagine a night out in Boystown. Those locals who frequent The Viper Room, the Roxy and House of Blues on the Strip aren’t likely to be familiar with much on Santa Monica Boulevard beyond Gelson’s and Vons for groceries. And rare is the gay Midwestern transplant or the Norma Triangle homeowner who has dined at Traktir or Kashtan or shopped in any of the Russian delis on the east side of town.

We think we need to mix it up a bit. So we have decided to drag our readers across our town’s invisible borders with occasional stories on what’s worth exploring. Put on your safari hat and boot up as we take a look at North Robertson Boulevard.

China has Hong Kong and Macao. West Hollywood has North Robertson Boulevard, the most fascinating block of which runs from Santa Monica Boulevard on the north to Melrose Avenue on the south. Just as Macao and Hong Kong glitter with a vibe and style that make their neighboring countries seem drab by comparison, so this block of North Robertson sparkles with a concentration of upscale shops, restaurants, bars and nightlife that makes the rest of our 1.9-square-mile burg seem a tad dull. A walk down Robertson, particularly on a weekend night, could leave the average West Hollywood resident thinking that, like Dorothy falling into Oz, he has crossed the rainbow-flag-bedecked border into a world whose only street is paved with the gold of fashion, design, celebrity and glamour.

Click through the pages below to tour through Robertson.