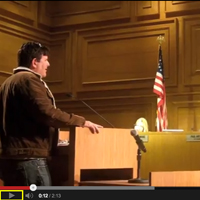 Some grudges are hard to let go of, even when someone else is trying to broker peace.

That’s what happened with councilmember John Heilman on Tuesday night at the West Hollywood City Council meeting. Heilman seems to be holding onto a two-year-old grudge against councilmember John D’Amico, who defeated Lindsey Horvath in the March 2011 election and as a result eliminated Heilman’s voting majority (with Abbe Land) on the council.

Rumors have circulated since D’Amico was sworn into office that Heilman wouldn’t have anything to do with D’Amico, save for the few tense words the two occasionally exchange from the dais. During the Dec. 17, 2012 council meeting, D’Amico confirmed that Heilman had not spoken to him since the election.

So, at Tuesday’s council meeting, resident Larry Block, owner of the Block Party clothing store in Boystown, attempted to play peacemaker. During public comment, Block asked both D’Amico and Heilman to stand up and shake hands.

“I’m just wondering if maybe tonight we can start the new year fresh and maybe John Heilman can shake John D’Amico’s hand, welcome him to city council and get a fresh start for the whole year,” Block said.

While D’Amico seemed game, looking in Heilman’s direction for a similar gesture, Heilman kept his head down, looking at the papers in front of him.

When Block pointed out to Heilman that D’Amico seemed willing and was looking toward him, the 28-year councilman said, “I’m looking at you. You’re the speaker.”

Heilman never looked at D’Amico, or shook his hand. It seems his grudge will continue.

“Perhaps the president was erring in his appointment of John Kerry as secretary of state. Maybe it should be you,” Prang said. “You’re a keen diplomat.”

Block is D’Amico’s appointee to the city’s disabilities advisory board.

WEHOville caught the whole thing on video. Watch it below:

How childish are these people. You are an old man Heilman. This is stupid!!!

agreed, just look at the Fuhrer’s platinum blonde hair. is this guy kidding me? put a term limit law in place and then vote heilman and abbe land out next election. this is a democracy, not an oligarchy.

lol thank you all for your comments.. — vote for term limits maybe one of us might actually have a chance against the big dollar money.. remember, back in dec they voted to extend the time to pay campaign debts, lifting the old 6 month limit. So now, every lunch and handshake goes to pay campaign debt,– we need term limits.

We are not the only city who needs major changes…Maybe we can take some tips from others:

John Heilman it is time to go. The city is tired of you and petty attitude. You are giving the city a black eye. We the people of west hollywood demand your resignation!

@Larry Block – thanks for saying what everyone’s been thinking.

Mr. Heilman is an enigma. If so many people dislike him, it begs the question, how does he get elected? Rumor has it that his deputy Fran throws tantrums and screams at the people in the office. Must be nice to be paid top dollar to act like a child and get away with it. On one of the occasions she has acted like an adult it was to order two $400.00 dessert platters while taking people to lunch on our tax dollars. I wonder why we never heard any more about Ms. Solomon’s city credit card use and only… Read more »

IT’S AN EMBARRASSMENT FOR THE CITY THE WAY THEY BOTH ACT. THEIR SENSE OF ENTITLEMENT IS BEYOND COMPREHENSION.

I can’t wait for Mr. Heilman to come up for re-election. I will vote for anybody else but him. His pettiness and his sense of entitlement has to go.

IT IS ABSOLUTELY A SAD NIGHT FOR OUR COUNCIL, WHEN SOMEONE WHO HAS PREACHED ABOUT INCLUSIVITY, WON;T INCLUDE ANOTHER ELECTED OFFICIAL. MR. HEILMAN AND HIS DEPUTY HAVE BROUGHT THIS CITY TO A NEW LOW. SAD SAD SAD.