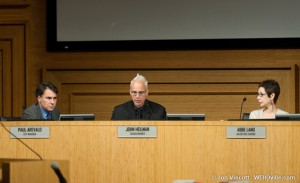 West Hollywood residents and  city council members have been reeling since news broke of an exclusive agreement reached between the Los Angeles County Metropolitan Transportation Authority and Cohen Brothers to explore bringing a massive, multi-use complex to Boystown.

At Monday night’s City Council meeting, residents expressed outrage during the public comment period — resident Stephanie Harker was “gobsmacked,” Cathy Blaivas said her “head was spinning” and Larry Block declared Boystown was about to “lose its character.” Council members insisted they knew nothing about the plans before WEHOville broke the news on Feb. 1.

“I’m really angry about this,” said Councilmember Abbe Land. “It’s pretty outrageous that the MTA would do this and we have to read about it in the paper.”

Cohen Brothers submitted an initial proposal to build a three-level underground bus garage with a massive, multi-use complex on top. Projected to take up the entire 8.4-acre bus yard and adjacent 2.5-acre sheriff’s station lot, that complex would be a mini Century City-like development with high-rise office, hotel, residential buildings and retail space, an outdoor amphitheatre, a movie theatre and a new sheriff’s station building.

The full 13-member Metro Board approved the two-year exclusive negotiating agreement with Cohen Brothers on  at its Jan. 24 meeting.

Councilmember John Heilman confessed he was “completely in the dark” on the agreement, and City Manager Paul Arevalo said the “rollout” was “poorly handled from a public relations standpoint.”

Others questioned whether the city truly didn’t know anything.

“It’s just really hard to believe that both the city of West Hollywood and the Sheriff’s department would not know that this mega-development was coming on,” said Steve Martin, a candidate for council in the March 5 election. “The Pacific Design Center has a long history of working with the city, a long history of working with the city staff. They know how the game is played. I don’t believe they would come forward in a very cavalier way to the MTA and never once contact anyone at City Hall. That is simply not credible.”

Arevalo said he has been talking with the office of Los Angeles County Supervisor Zev Yaroslavsky, who sits on the Metro board, about making sure the city is kept in the loop on future aspects of the plan.

The proposed project was the talk of town over the weekend. Residents expressed fury over not hearing about the project, alarm over the increased traffic the project would bring and dismay over the belief it could “destroy” the Boystown area, so called for its concentration of gay-oriented bars, restaurants and shops.

“West Hollywood is going to lose its character as a small city, which is a symbol of diversity,” said Block, owner of the Block Party clothing store. “We can all look forward to getting older in a city that we won’t even recognize.”

The council also expressed dismay over the scope of the plan.

Councilmember John Duran has long talked about developing the site into a public area with a community plaza and community theater with shops along the south side of Santa Monica Boulevard.

“The artists renderings that I have seen are completely inconsistent with any of the public purposes that I have mentioned in the past,” said Duran. “I haven’t lived in the city of West Hollywood for 25 years and defended the Boystown district to see it turned into a mall. That is not consistent with anything that the community needs, wants or desires.”

The council urged residents to write to the MTA to express their concerns, and noted that nothing has been approved.

“We still have control over the zoning of that property and currently it is zoned for public purposes,” said Duran.

“The city is the ultimate land-use authority,” added Arevalo. “Anything above and beyond (the current uses as a transit yard and a sheriff station) is at the discretion of the city and the City Council.”

Arevalo added that the city should create a master plan for the site since it is such a “significant piece of property.”

Meanwhile, Councilmember John D’Amico, while also upset by the scope of the plan and the lack of notification, had a slightly different perspective.

“What I’m hearing (the council say) are the things the residents often say to us, ‘We never got any notice. I didn’t see this coming. I was totally shocked’,” D’Amico said. “I think as a deliberative body, we should notice this is what it feels like to be in our community sometimes.”

To Johh Heilman, I ask what he thinks is the difference between “the community” and “the city.” I gather that in his way of thinking, the residents are the community & elected politicians & city employees are “the city”.

Of course, many, many people HAD to know, but they probably all kept the “code of silence” about it. The legacy of the Heilman dynasty is one of property pimping, the invasion of the elite of West Los Angeles taking over West Hollywood, the “de-gaying” of the city, and selling out grandmothers and other moderate income people, not to mention the creative and artists who created West Hollywood to be a haven in the face of greed. Who CARES about all the progressive laws and such if a person can’t afford to live there? And yes, someday, probably soon, “Boystown”… Read more »

So is this why a Westside Specific Plan was never undertaken, despite promises from the city to the contrary? So Boystown could be plowed under and sold to the highest bidder? Little by little the city is selling out. De-gaying this part of town would be the final blow. Is that what WeHo has become?

Allegra covered a lot of fertile territory, but I will add to it with a series of quotes from WEHOville’s Jan 9 article, “Campaign Consultant Steve Afriat: Playing Both Sides of the WeHo Fence,” she references – that might be worth some additional scrutiny in light of the revelations in this story. … he (Steve Afriat) has worked for council members John Heilman, Abbe Land, Jeffrey Prang and John Duran. This year, he’s consulting for incumbents Duran and Mayor Prang, both of whom are seeking re-election in March. As a lobbyist, Afriat represents numerous companies who have business with the… Read more »

City Manager, Paul Arevalo, didn’t actually say that he was in the dark. He said that the rollout was poorly handled from a PR standpoint. Yeah! Ann Macintosh told the MTA (according to the Weho News article) that we are interested in having the site developed. But, nobody kept watch? I wonder when we would have finally found out about this project if reporter James Mills hadn’t dug it up. When the PR machine was in place? It didn’t appear that most of Council knew but, it would seem Steve Afriat must have shared the enormity, of this project, with… Read more »

and why do i feel like this whole thing is a canard?

Council members AND City Manager were completely in the dark about this? Reminds me of that great line from Casablanca — Captain Renault says, as he’s being handed his winnings: “I’m shocked, shocked to find that gambling is going on in here!” City Manager didn’t look too shocked to me.

Just build a movie theatre and parking, nothing else. That should not increase rush hour traffic. Get rid of that noisy car wash on Santa Monica Blvd and Palm Ave; it is out of place and too noisy.

Quote from Duran: “That is not consistent with anything that the community needs, wants or desires.” That is PRECISELY how the neighbors felt about the City of West Hollywood’s $41.3 MILLION dollar plan for Plummer Park. Councilmember D’Amico, you are absolutely right and I thank you for bringing it to the attention of your fellow council members. I also agree with Steve Martin’s comments. Are we expected to believe that not ONE council member knew about this and yet they are leading the City? Our City Manager did not know? Our City Attorney did not know? Holy out-of-control, Batman! Who’s… Read more »

Build it but put strict restrictions on its architectural integrity. It must be beautiful and unique. Other cities have done this. We can’t stop growth but we can insist on the design on how it’s successfully going to look and flow through our cities. Include parks, residential, low income housing, theater, community space, LGBT museum, city landmark, build a aquarium, a topiary, an ice tunnel, get creative, and on and on. Have a design contest and let the residents decide. This doesn’t have to be a lost cause. This could actually be a world reknown landmark… if the city council… Read more »

The end result of a “Development Agenda” gone wild, objecting to it was the core of why I ran in 2004, then realized that the development “machine” in West Hollywood was too big and too well funded to stop. The monster is now devouring the children who once fed it.

I can’t believe they didn’t know. And has anyone moved to declare the REST OF “Boystown” “historic?” They’d better do it quick, or it will be next to get plowed under for high rises. These folks (Heilman & Land) just don’t seem to understand.