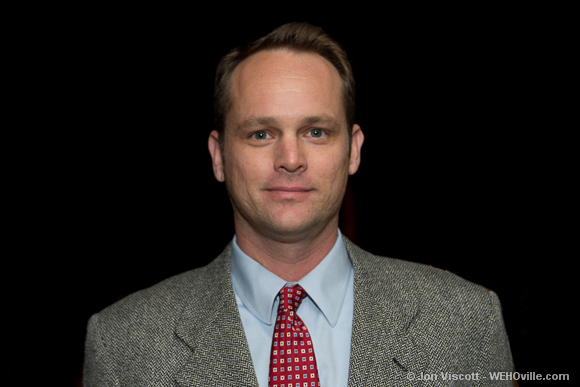 Rusty Wiggs began calling West Hollywood home 15 years ago when he and his partner, psychologist Joel Becker, moved in together. “We celebrate three anniversaries each year,” said Wiggs, 40,”our domestic partnership, our civil union and our wedding.”

A native of Kansas City, Mo., Wiggs studied film production at Cal State Northridge. Today, he is executive director of the Cognitive Behavior Associates in Beverly Hills, a cognitive-behavior therapy practice. He oversees a staff of six doctors, including his husband. Having struggled with dyslexia his entire life, he says he learned to turn it into an advantage. “It forces me to think of things in different ways,” Wiggs said. “It helps me think on my feet.”

Answer: There always has to be a balance between preservation and development. As a growing city with major growing pains it’s an important issue to address. One of the first steps in preservation is to identify our landmarks. We need to know what’s important so we can take steps to preserve that part of history. Next, land markers with the history of the building have to be erected to keep the history alive. The bigger issue here is development in the city. We are a growing city growing without a plan of who we are as a city. Development is going to happen, but it is our job to plan it out and decide what we are for our future.

My thoughts go far with planning for parks and squares to be added with new infrastructure. I want to create an infrastructure of transportation that does not require cars. I want to plan new buildings that will build up to 60 percent of land value and be limited in height to create an urban feel with space to breathe. But that is talking about our growth and working on development as a city.

Answer: Nothing stays as is. When you look at how many titled projects are in the pipeline we are going to change in a big way. Grabbing ahold of that change and making it work for us as a city is the challenge. Urban density like mid-town Manhattan would destroy West Hollywood and turn it into urban chaos. Moderate density is a must, but that can have many different interruptions. We need a commercial core for business and an urban village for life. Our main commercial streets can handle more density, but our residential areas need to contain an urban village feel.

Walkability is the core of urban life. Being able to walk out to eat, shop and or work is one of the perks of living in an urban area.  Transportation needs to change as cars are not the answer to our transportation issues.  Transportation is a bigger issue than just the city of West Hollywood.  Most of the cars going through our city everyday are commuters making their way to work.  Transportation has to be combined with commuters and our needs as a city. I am a subway (mass transit on its own system) and public transit fan, but getting people out of their cars is an issue we need to start talking about.

The term limit proposal will not work for our current needs as incumbents will still have power for 12 more years. I think what we are looking for is a city council that will communicate to us and not make us use lawyers to communicate.

Term limits is the only power we have as a community to change the system as incumbents always have the power to win. People need a voice and need to feel that they matter and we need a city council that can do that for all of us.

Answer: When talking about us as a “Creative City” I am at a loss. We survive as a city of restaurants, bars and hotels.

Let’s not forget parking tickets. We have a history (before we became a city) of a place of entertainment of all sorts. I can point to a building that used to be a brothel. We have the place of the first public (not hidden) gay bar in the county of Los Angeles.

We have a lot of creative people who come through our city based on our entertainment venues, which we benefit from with taxes.

I know a city can promote an idea, but the “Creative City” has always eluded me as we are a city of business, be that we have a lot of entertainment business or not.