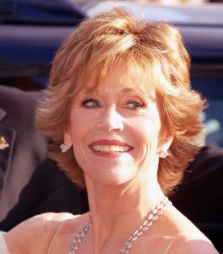 Legendary actress and political activist Jane Fonda will help kick off One Billion Rising and the 15th Anniversary of V-Day on Thursday, 10 a.m. at Sal Guarriello Memorial Park.

Fonda, who has won two Academy Awards during more than 50 years as an actress, is expected to speak, along with Councilmember Abbe Land and Lindsey Horvath, a former council member and outreach coordinator for One Billion Rising.

In October 2012, Fonda spoke before the WeHo city council, asking that the city support One Billion Rising, a call for 1 billion women around the world to join together, and dance in public on Feb. 14, 2013. The event coincides with the 15th anniversary of the V-Day movement that was inspired 14 years ago by Eve Ensler’s play, “The Vagina Monologues.”

Fonda is well known for her political activism, including a number of controversial moments. Check our list of Jane Fonda’s “Top 5 Most Controversial Activism Moments.“