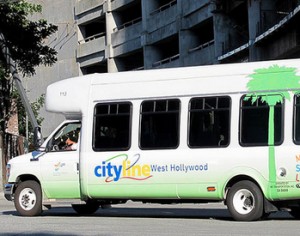 In celebration of a new Cityline bus route, the city is proclaiming Friday, March 1, 2013 (the day the line becomes available) as “Cityline Day,” and will make the announcement on Tuesday (Feb. 19).

Cityline is WeHo’s own shuttle bus, and an alternative to the Metro bus system.

The proclamation will be made at the Auto Court of the West Hollywood Library, at 5:30 p.m., and will include remarks from city council members.

According to the announcement, maps will be easier to understand. There is no longer an “A” and a “B” route, as all buses go to the same places. The shuttles on the new route will come more often — about every 30 minutes in most cases. There are new signs that tell riders which direction the stop serves. And Cityline is now free.

Stops include near the West Hollywood Library, Cedars Sinai Medical Center, the parks, West Hollywood City Hall, the post offices, and other major commercial areas in the city.

All shuttles are ADA accessible.

Cityline operates Monday through Saturday, 9 a.m. to 6 p.m., and does not run on major holidays.

For a map of the routes, see below.

yep, i totally agree with anderx….and only in weho would they “celebrate” this…..will there be strippers too?….UGH

CityLine needs to run at night so it can provide service to those residents with full time jobs. Currently the model is only beneficial to senior citizens and disabled people during the work day. A night time route would help reduce traffic and parking issues. We have a fleet of vehicles ready to help shuttle party goers and community members around town. We need to work on this rather than wasting time talking about “self contained module” monorails.