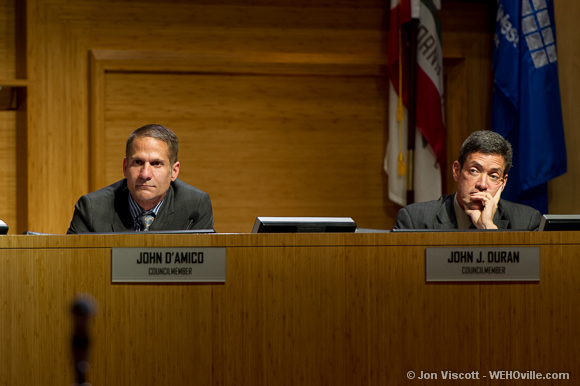 While West Hollywood City Councilmember John D’Amico has come out in support of the Measure C term limits initiative on the March 5 ballot, he also continues to support his colleagues, incumbents John Duran and Jeff Prang, in their bid for reelection to the city council.

“I have observed the people currently running (for the two council seats up for election) and I don’t think any of them are prepared to be on the city council,” D’Amico said. “That’s why I very strongly support John and Jeff. I think they are the best two candidates to be reelected. I think they have proven their ability to lead and take care of neighborhoods and community and make wise decisions.”

Elected to the council in March 2011, D’Amico is the only member of the council to come out in support of the term limits. The other four council members – Duran, Prang, Abbe Land and John Heilman – all strongly oppose the measure.

If passed, Measure C would limit West Hollywood City Council members for three four-year terms in office. The measure is not retroactive, meaning that all current members of the council would be allowed to serve another 12 years, provided the voters keep electing them. On the current city council. Heilman has served for 28 years, Land has served for 21 years, Prang for 16 years, Duran for 12 years and D’Amico for two years.

“I’m supporting Measure C because I’m interested in setting a deadline for us, so as leaders in the community we can begin to help men and women, transgender men and women, to be ready to be on the city council,” D’Amico said. “I think it’s difficult to run for city council. It should be difficult. But I think we have to mentor people to be ready to do the hard work of running and do the hard work of being a councilperson.”

One reason D’Amico felt it necessary to go public with his support for Measure C was the fact that many residents automatically assumed he joined his four colleagues in opposing the measure.

In September when term-limit supporters were gathering signatures to qualify for the ballot, he signed the petition. However, at the time D’Amico said was opposed to term limits, and felt that coalition building was a better way to achieve change.

“I signed it because I wanted (the community) to have a discussion,” he said.

As a result of those conversations, D’Amico changed his position.

“I have spoken to probably close to 100 people about Measure C, some of them against Measure C, most of them for it,” he said. “The words that I hear over and over again are that they want to see some change on the city council.”

D’Amico hopes to send a message to voters that it’s OK to vote for term limits and also vote for Duran and Prang.

“A lot of people thought you couldn’t support Measure C and the incumbents,” D’Amico said. “But it’s reasonable to support both.”

Term limit supporters say the sudden support from D’Amico is a shot in the arm for their campaign.

“It energized us tremendously. Our volunteers are putting even more effort into getting the measure passed,” said Schmidt. “John D’Amico has shown that longevity is not a qualification for serving in public office.”

I got a phone call last night promoting Duran and Prang – PAID FOR BY THE DEMOCRATIC PARTY! – that dissed Measure C as something cooked up by “outside forces.” What a crock! I will not vote for either of those two If I could, I’d vote the whole lot out of office. Of course, the developers would probably corrupt whoever take their place.

It is very possible that the passing of Measure C will change the dynamics of future elections, ending the “incumbency brain freeze” of many voters, who will now think before they vote. Measure C is the best thing to happen to West Hollywood since the 1st election in 1984. It’s even possible that some of the incumbents will get it, and bow out gracefully at the end of their term, although, given their mind set, that is unlikely.

Kudos to Councilmember John D’Amico for endorsing his colleagues. It was an act of political courage given the “throw the bums out” dynamic that is driving this election. I disagree with him about Measure C, however, because term limits have been shown to do more harm than good over time. But even if Measure C passes — and it likely will — it won’t have any practical effect, good or bad, until many years after all the current members are termed out in 2025 and 2027. The reason for this is that Measure C does not address the root problem… Read more »

I’m not part of the political establishment, but I am a successful businessman and at the end of the day the City of West Hollywood is a business, and its residents, business owners and visitors are its customers. At 21, I started my company with a $10,000 loan and grew it into a 24/7 operation with 111 employees on four continents, and our clients span the globe. I understand how to balance a budget, and more importantly listen to my customer. I am prepared and excited to represent our community on the city council. I don’t think the city of… Read more »

Another reason to vote for Measure C! Talk about being unprepared – that is the dumbest thing I have heard but then again D’Amico never appeared to be that smart – just listen to him at any City Council meeting – always unsure of the question or issue at hand. No telling what deal Duran offered him for his endorsement.

Wow! How is Steve Martin not prepared? He has already been on the counsel! I will not let this deter me from getting my message out. This makes me want to run again two years from now against John! Just because I can’t afford to contribute $30K to my campaign doesn’t mean that I am unprepared to be on the council. I am unprepared to listen to the establishment. So in that respect, I am unprepared. Same stuff they said about Barack Obama. John, you sound like another John . . . . John McCain! If John is so well… Read more »

@rudolph…haha, great idea!!…. but duran is so cocky to think no one else could possibly do the film and his legacy justice, so he’d insist on role himself….my pity would be for the writers who have to make up a bunch of BS…..as it is, when he’s not daydreaming, duran only votes yea/nay and incessantly checks his Grindr on his cell phone during public comment from his throne on the dais…..these council people don’t even respect the residents enough to pocket their phones during council meetings…..i mean, i know you need to be on standby with your developer cronies 24/7,… Read more »

I hope everyone realizes that our city of Weho is doing quite well financially, and is very sound. You also need to know that most of the current City Council have steered the ship in this direction. We all have our issues which are important to us, but let’s not lose site of the big picture. Love them or hate them, the Council has done a pretty good job of keeping us on solid ground. A lot of cities cannot say that.

Woody – Mr. Duran seems able to concoct stirring stories of his heroism. Barney Fife – I laughed like a drain!!! Mr. D’Amico did in fact promote “Go-Go Appreciation Day”. I wrote to him to suggest how he could make it an even better event by including female go-go dancers who were pioneers in both the go-go cage and the pole(although I hardly saw the point at all) and he informed me that that was “then” and that this was a “gay thing”. I have the email. It was insulting to me because this is a city of all people… Read more »

Actually this is coming back to me. I recall that folks from the LAPD & others involved in the pursuit of the arsonist, were appearing at a press/news conference to update the public, then suddenly Duran appeared, like Barney Fife, in front of the camera to declare that he was practicing for a terrorist attack, I paraphrase, but it actually was something to that effect .I remember it caused hearty laughter in the room, myself included.. We were incredulous. There must be some local news footage of this available online somewhere, you simply cannot make this stuff up.

@”me”, i had not seen that mailer, seriously? i had no idea that John Duran led the manhunt from his command center! this deserves a movie version: “Under Fire – The John Duran Story” (They Messed With The Wrong Guy – How One Mayor Brought Down A Man That Terrorized An Entire City). I see Sylvester Stallone or Danny Trejo in the lead role, or we can go more Hollywood and have Ben Affleck play Duran (he plays Hispanic in Argo), or should Mr. Duran play himself? A movie career might put him in a position to be the next… Read more »