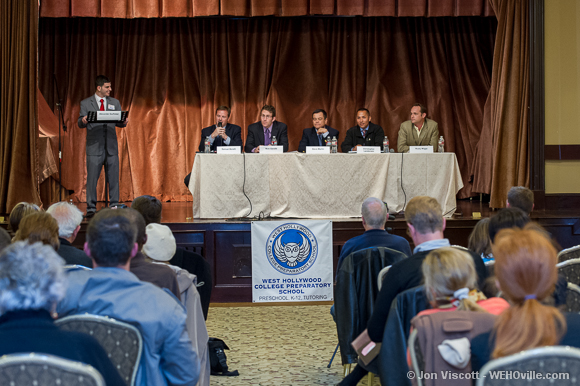 Students had their chance to fire questions at five of the nine candidates running for two city council seats on Wednesday night as 50 people attended an hour-long debate at the West Hollywood College Preparatory School.

The K-12 school is housed in the Iranian American Jewish Federation temple complex on the northwest corner of Crescent Heights and Fountain Avenue.

Incumbents Jeffrey Prang and John Duran did not attend due to work commitments. Without their presence, the participating candidates skipped the flippant remarks and biting asides they aimed at the incumbents in the former debate, put on by West Hollywood neighborhood associations two weeks ago.

Candidate Sam Borelli, who has been a public safety commissioner for the last decade, emphasized shoring up the city’s eastside by engaging residents, especially when it comes to Plummer Park renovations.

He also continued to make his case for getting younger WeHo residents civically involved. To that end, he is pushing for the creation of 200- to 350-square-feet “micro-housing” apartments that are affordable for young people.

Candidate Nick Garzilli discarded Borelli’s idea. The micro-units would be like living in cages, he said. He did, however, argue for rehabilitating the city’s older apartment buildings, and using crowd-source funding sites, like Kickstarter, to do it.

Garzilli, once again, spoke extensively about his dream of building a network of personal rapid transportation (PRT) pods to move people on lines above the street. He said it would eventually be possible to transport people to San Francisco in 30 minutes, and New York City in 45 minutes with Evacuated Tube Transport.

Borelli, on the other hand, advocated for a nighttime Weho Trolley, which has long been in the works, to go to nightlife areas and “inspire people to leave their cars at home.”

The topic of homeless produced one of the more controversial comments of the afternoon as Landavazo said he would “empower” homeless people by offering them two options: They could either go to PATH (People Assisting the Homeless) to get housing and other services, or they could go to jail.

The homeless would be easy to arrest because they panhandle aggressively, Landavazo said.

Candidate Rusty Wiggs, who works as the office manager of a Beverly Hills psychology practice, said he would make sure mental health services were available for the homeless, while former council member and current candidate Steve Martin said he would work to expand drug and alcohol services to homeless people, because he believes those are most often the issues that contribute to their homelessness.

Martin also said he wants to keep the city’s urban village feel and would push to get rid of the developers who he believes are currently running city hall. Martin said he would work to preserve the city’s rent-control housing by eliminating incentives that encourage developers to tear down older, affordable buildings to build luxury condominiums.

Martin advocated finding ways to integrate the Russian population more into the city, noting that the Russian community is less insular these days as the population gets younger and is more likely to be bilingual.

Post-debate, school officials said they were pleased and proud of the students for coming up with the questions.

“I think this will likely become an annual event,” said Gurfinkel. 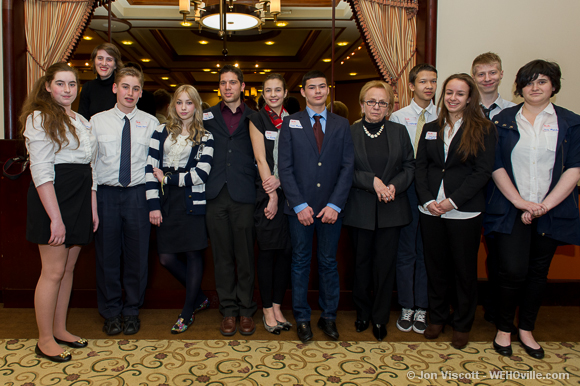 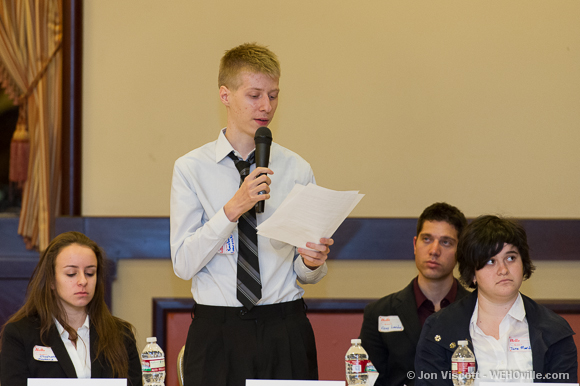 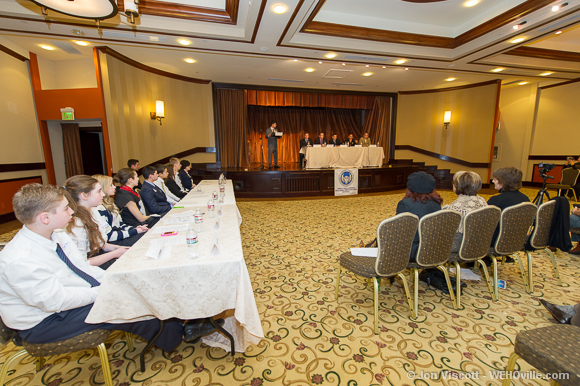 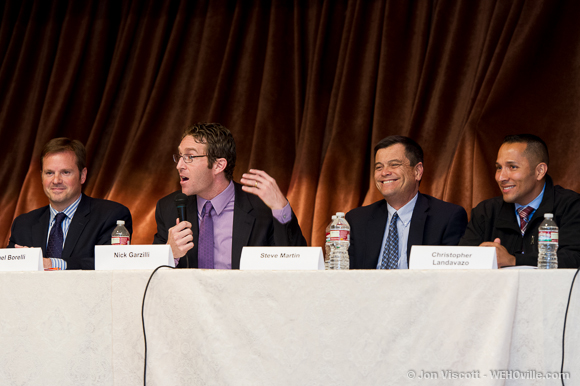 Curious to see that a Steve Martin sign just popped up on the IAJC property, albeit in the weeds at their corner parking lot.

Shiela, I often respect some of the statements you make but in this case I think you are exaggerating as no hysteria was expressed in my comment or personally at any of the meetings concerning the IAJF issue. Mr. Martin clearly undermined the neighborhood of 100 plus residents by his unnecessary intervention into an issue that was not within his purview. He could have opted to stay out as a matter of judgement particularly in view of his relationship with Mr. Carlat. Beyond speaking out publicly against the neighbors, Mr. Martin went further to publish his comments in a local… Read more »

Lynn, What in the world are you talking about? You say, “Last evenings traffic jam for nearly 2 hours exemplified a small measure of what the residents have experienced late into the night and early morning hours for years. Was Mr. Martin oblivious to the extreme noise and gridlock Wednesday evening or did he remember the neighbors that he undermined for his own benefit?” What Nonsense!! Students from the school were civic minded enough to hold a candidate’s debate to which they invited the community. Unfortunately, it was only attend by, I would guess, about 75 people. It took place… Read more »

@me. It’s unfortunate that you feel the facts on the city record that I draw from and participated in are tantamount to bashing. I don’t feel that by respectfully stating an opposing point of view one is “bashing”. Perhaps you can be specific. Do you also have a specific area of concern that you feel I should be addressing in my “wants”?

you have done an amazing job bashing and telling us what you don’t want lynn russell…..so what is it you DO want???….seems that’s way more productive, no?

In addressing Mr. Martin’s comment about preserving the “urban village feel” I would like to point out that most folks consider respect for a residential neighborhood paramount to such an idea. It was especially curious to find that the debate Wednsday evening took place at the IAJF facility at Crescent Heights and Fountain, which is supported and attended by congregants that principally reside beyond West Hollywood. For years the neighborhood has been been threatened by the excessively disruptive commercial banquet hall activities of these folks at Neman Hall. Mr. Martin and his friend political consultant David Carlat exerted major efforts… Read more »

The debate was beautifully prepared and executed.
The students worked so hard putting it together and did a brilliant job.

Some of the kids are going off to college in a couple of years.
If nothing changes in this election, I couldn’t help but think, that if after college,
should any of them decide to run for Weho Council,
they’d end up being up against the same incumbents and wouldn’t have a chance.

I can only hope things do change for them. They are our future.

SIX DEGREES OF CHRISTOPHER LANDAVAZO I met Christopher Landavazo recently on N. Orange Grove Ave. while he was knocking on doors and introducing himself as a candidate for City Council and something prompted me to say hello. He introduced himself and told me that he was a candidate for City Council. I love West Hollywood and began to talk to him about my concerns. He listened, made notes and his sincerity struck a chord, so I went home and researched him. He made an impression and I had to find why; there was something special about the guy. I learned… Read more »

ET3 is fast, but it will not get you to NY in 45 seconds as this article currently says. Eventually NY to LA in 45 min, but the first operating speeds will be around 350mph. You can learn more at http://www.ET3.com. Just like Elon Musk talked about getting to SF in 30 min: http://www.gizmag.com/elon-musk-hyperloop/25053/ I really wish that my objection to “micro units” was clear because I am squarely against the UN Agenda 21 plan. I don’t think people should spend $800-$1000 to live in a 250sq ft apartment. It is not right. Please go to http://www.DemocratsAgainstUNAgenda21.com to see that… Read more »