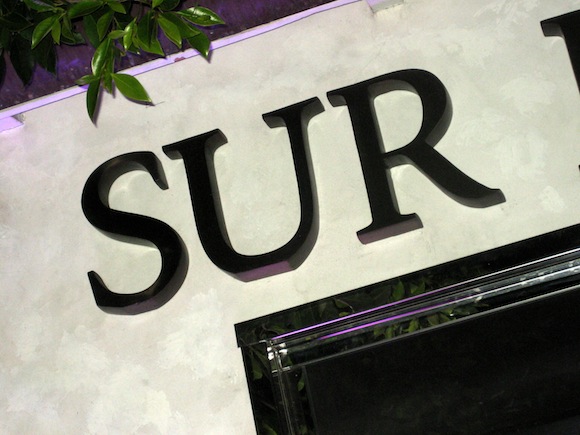 Since “The Real Housewives of Beverly Hills” first aired in 2010, cast member Lisa Vanderpump’s star has been steadily rising. The bold and beautiful Brit is the only one of The Housewives to have her own spin-off reality show. “Vanderpump Rules,” which concludes its first season tonight on Bravo, takes place at her Robertson Boulevard restaurant, Sur. Moreover, the restaurant’s staff members are also characters in the show, making the place not just a dining room, but the set of a working soap opera.

For those who grew up in the era of the soap, the thought of dining at Kelly’s restaurant in “General Hospital”’s fictional Port Charles, or tipping back a pint at Brady’s Pub in “Days of Our Lives’” fabled Salem, all while interacting with actual characters from the shows, would have been a couch potato’s dream.

That’s the brilliance of Sur, and that’s why the place is packed seven days a week.

But what about the food? If you don’t follow the drama surrounding servers Stassi, Jax and the rest of the oh-so-young-and-heartsick gang at Sur, would it be worth your while to go for dinner? That’s the question I set out to answer last Tuesday night.

Purple lights twinkle in the trees around Sur’s front door. As you enter through a heavy velvet curtain, sultry world music floats down from above to greet you. The interior is dark, sexy and almost ecclesiastic: wrought-iron chandeliers, bunched linen, slip-covered chairs, architectural fragments and potted trees throughout. Taper candles and rose petals grace each table.

Conversely, Sur’s menu is uninspired. It is similar to one that you would find at a thousand continental restaurants in hotel lobbies. The salads are ubiquitous. For instance, there’s that pesky endive, pear, caramelized pecan and blue cheese salad that will evidently be with us until the end of time. Other yawners on the salad menu include a Caesar, a Greek, a Caprese and a beet salad.

Starters are pretty basic as well: the Smoked Salmon, Alfalfa Sprouts Salad, Capers, Mango Dressing ($11) is an example of how the menu often leans towards spa cuisine with low- calorie and low-carb offerings that are easy on a “Real Housewife’s” figure. Here the fish is fresh and delicately cured, but the alfalfa salad is an unconventional choice that doesn’t do much to compliment the salmon.

There is a lot of laziness throughout the entrée menu. If you look closely, many dishes share ingredients, side dishes are basic, and it’s up to you to pair them with your meal. And most inexplicably there are no less than five different versions of a chicken breast on the menu.

Most of the meat entrees are reasonably priced between $20 and $30, but strangely none of the handful of pastas offered are any cheaper. Not to worry, the pasta prices are justified by an inventory of “fancy” ingredients like “white mushrooms” and “shrimp.” Never mind that the white mushrooms are just regular, button mushrooms

In short, this menu will not inspire your date to lean in and say, “Ooh … now THAT sounds interesting.”

I went with the Pork Chops, Dijon Mustard Crust, Fresh Apple Sauce, Two Side Orders ($22). For the side dishes, I chose green beans and yams; both were al dente and unremarkable. The two pork chops were pounded, breaded and tasty, but nothing that a bachelor couldn’t pull off at home with a little effort. A very small ramekin of apple sauce completed the dish. Needless to say, jaded foodies, be prepared to choose the lesser of the menu’s banalities.

That being said, there is nothing wrong with Sur’s basic restaurant food. It tastes good enough, but as I left, I wondered how I had such a good time in spite of forgettable cuisine. Perhaps it’s because restaurants don’t always have to be a showcase for chefs who live to ply their gels and foams. Sometimes a restaurant can exist as unabashed fantasy.

Sur does dazzle. It’s Hollywood in a box, and it’s exhilarating to be a bit player in its scene. The diners around me were visibly appreciative of this, their smiles genuine, their demeanors subdued and elegant. “Vanderpump Rules” cast member Kristen Doute was my server, and Jax Taylor was behind the bar making drinks.

As a local, it’s easy to resent the sometimes vapid entertainment business that fuels our city, but at Sur it feels glamorous and it feels good.

I came to West Hollywood years ago in hope of experiencing nights just like this one. When I lose the ability to appreciate Sur for what it is, then it’s time for me to get back on the bus.

What a nice review! Well said. I love how you compared it to being in your favorite soap opera setting (the Valley Inn on All My Children immediately popped in to my head).