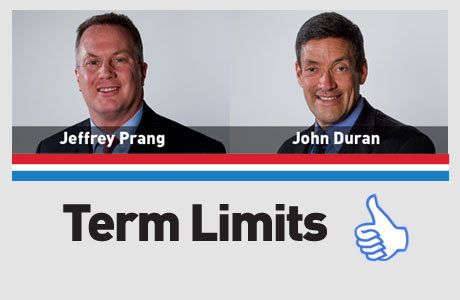 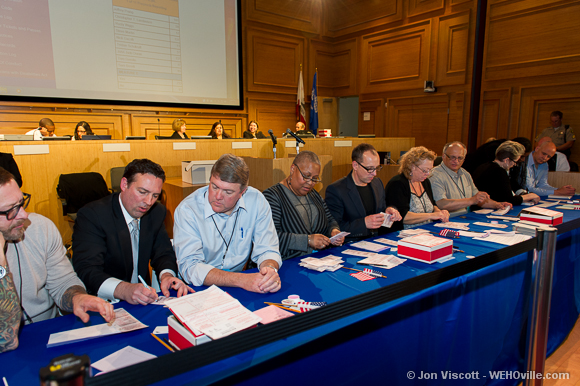 The incumbents are the best people for the job, but it’s time for them to start mentoring a new generation of leaders. That was the somewhat mixed message West Hollywood voters sent via the ballot box on Tuesday as incumbents Mayor Jeffrey Prang and Councilmember John Duran were both reelected to the West Hollywood City Council but the term limits initiative passed by an overwhelming majority.

Measure C, the term limits initiative which will limit city council members to three four-year terms, passed by 62 percent – 2,690 “yes” votes to 1,653 “no” votes. Many thought that in the process of Measure C passing that one, if not both, incumbents would also be ousted. However, that was not the case as Prang garnered 2,395 votes and Duran earned 2,064 votes in unofficial results announced Tuesday night at the council chambers.

Attorney Steve Martin, a former councilmember who authored the term limits initiative, came in a distant third place with 1,393 votes, some 671 votes behind Duran. Some assumed the momentum Martin garnered in helping gather signatures to quality term limits for the ballot would also push him to victory in the council race. However, voters sent a clear message: they support term limits but not the outspoken, controversial Martin.

The term limits victory will have no immediate effect upon the makeup of the city council as it is not retroactive. All five of the current councilmembers will be allowed 12 more years in office, provided the voters keep electing them.

“West Hollywood voters sent a message tonight,” said Yes on C campaign chair Lauren Meister. “Measure C ensures that West Hollywood has a mechanism in place to bring fresh perspectives and new energy to the council. It opens the door to broader public participation in the legislative process in our city, which benefits everyone.”

At the Prang-Duran victory party held at the Robertson nightclub on Robertson Boulevard, even before the results started trickling in, optimism was high amongst the crowd of 100-plus people.

Duran read the results of each precinct aloud as they came in while a volunteer wrote those numbers on a giant poster on the wall.

Results from the first precinct strongly hinted Martin was in for a long night. Precinct 71, the western portion of West Hollywood West, a district where Martin was believed to be especially strong, had Prang in first place, Duran in second place and Martin a close third. As more results came in, Prang and Duran pulled ahead of Martin substantially.

In fact, Martin came in third in every precinct except No. 6, the eastern portion of West Hollywood West, where he finished in second place to Duran’s third. Certainly Martin felt the impact of the top two challengers also gunning for the incumbents, Borelli and Landavazo, whose roughly 800 votes apiece significantly bite into his portion of a larger potential vote.

“Steve knocked out the five incumbents (via Measure C passing), even if he didn’t win himself,” said resident Shelia Lightfoot, a term limits and Martin campaigner.

While many would have expected the mood at the Yes on Measure C party held at Eleven nightclub in Boystown to be exuberant, it was a more somber affair as that party also doubled as the site of the Martin victory party. With no live TV feed, the 50 or so people gathered around quietly watching the live feed of the city website’s election page.

A similar situation played out at Kitchen 24 restaurant in Boystown, where the Borelli party was being held. Borelli campaign leaders kept an eye on the results via a laptop, the approximately 35 party-goers periodically coming over to ask about the latest updates.

“I’m proud to have run a campaign about the real issues facing West Hollywood,” said Borelli.

Eleven nightclub became the place where the other candidates all gathered, at least briefly – Landavazo, Schukraft, Garzilli, Demille and Wiggs all dropped by to congratulate Measure C supporters and share condolences with each other.

“I’m exhausted and disappointed,” said Garzilli. “But I met a lot of people who want to help me get transportation pods built.”

With 4,580 votes counted Tuesday night and another 750-800 absentee and provisional ballots waiting to be counted pending signature verification, this election will top out at roughly 5,300 voters casting ballots. That’s more than in 2009, the last time Prang and Duran were on the ballot, when 4,100 people voted. However, it is far less than the 6,100 people who voted in 2011, when three council seats were up for election. 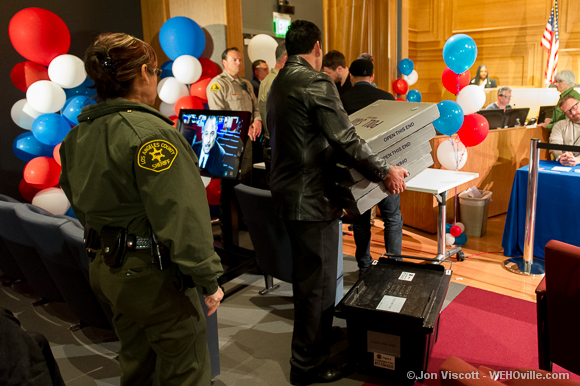 This election saw a rash of negative campaign mailers, more than in any previous municipal election combined. Many of those negative mailers came from the Duran supporters aimed at Martin.

“My mailbox has indigestion from all the negative mailers,” said resident Larry Block.

“It’s pretty clear that the negative mail hurt me,” said Martin. “If it wasn’t for the negative mail, at least one of the incumbents probably would have lost. When you’ve got $150,000 in developer money, you can do a lot of damage with it. I don’t think anyone can look at this race with any sort of pride and claim victory.”

The Yes on Measure C campaigners ran a positive campaign despite No on Measure C supporters trying to link them to Republicans, Tea Partiers and Prop 8 supporters.

“We said early on that term limits was not about any individual, that we weren’t going to make it personal. We were going to talk about our love for the city, not about our anger about transgressions against it,” said Yes on Measure C campaign manager Scott Schmidt. “We were going to give the people of West Hollywood hope that things can be better. That’s the message (the voters) sent; they sent a message that they hope things can be better.”

The 750-800 absentee/provisional ballots awaiting signature verification are currently scheduled to be counted on March 11. The city council will certify the election results at its March 18 meeting, when Duran and Prang will both be sworn into office again.

Get a blow-by-blow account of election night at our live blog here.

Rudolf the low information voters were the ones supporting the disasterous SM. Yes Steve that was the door hitting you on the way out. You lost buddy, stop trying to justify a loss. Finito, the end, don’t be a sore loser. Ya this is yet another Duran who let the dogs out voter and a Prang Cat with claws that are happy with the victorious Jeff and John. The silly C vote? I guess you can be happy when Duran and Prang are in their late sixties that they decide to be termed out. So laughable. Ya, you really showed… Read more »

if we were really the creative city, the pod guy would have been a shoo-in.

THE POD GUY USED HIS PLATFORM AS IN INFOMMERCIAL. BRILLIANTLY, BUT I THINK. . UNTIL WEHO OPERATES LIKE DISNEYLAND I DON;T SEE MUCH TRACTION IN HIS IDEA.

I hope the losing angry one will finally get the hint, leave west hollywood and take his hateful brand to another city, like maybe…uhr Atlantis? He was hypocritical from the start running on term limits, such a joke for a multi term incumbent, attacking developers when he so conveniently had taken money himself in a prior campaign and organized basically haters with nasty tactics that all pointed to negativity. The so called attacks on him were accurate. 100 percent accurate, nothing compared to his supporters whom frequently engaged in homophobic and racist innuendo with lies and distortions. Now that he… Read more »

what is the total number of eligible voters in west hollywood?

The first victim of ‘Term Limits’ was Steve Martin back when voters exercised their voting right to remove him from office. Now we have ‘C’. The irony is that Steve Martin will probably never be impacted by the new measure ‘C’ even though he actively campaigned and pushed for ‘Term Limits’. He will never be voted back on the council because the majority of Wehoian’s don’t want him and his angry, deceptive, combative brand of governing on our council. The voters have time-and-time again said NO to Steve Martin and this is clear with the results of this election. Woody… Read more »

@Jimmy, it may not be kind but in SOME cases true. those who don’t know which city they live in would definitely qualify as low information voters in my book. actually, that IS still very kind.

congrats to the incumbents, and please keep in mind: 3,764 people (not yet counting absentee ballots) voted for the challengers. that is A LOT more than either incumbent.
so most voters would like to see change in WeHo, as also demonstrated by Measure C, they just can’t seem to agree on a candidate.

It must be very stressful running for city council. I believe all who did were very brave. However, the voters have clearly spoken. I don’t think it is kind to label the voters who did show up as low information types. They are out there voting, which says a lot, as there are thousands more who didn’t. C did indeed win. . Duran and prang however, also won. Congrats to the winners.

I want a measure that will limit the number of times a losing candidate can run for City Council. Mr. Martin, please take the hint. Your lying ways don’t work. Lauren, if you ever hope for a chance to run and win, you should distance yourself NOW!!

Everyone worked very hard to get term limits passed and our efforts paid off. Thank you to all of the volunteers who worked tirelessly to place term limits on the ballot, and who helped to “get out the vote” for Yes on Measure C. Thank you, West Hollywood voters! And, to our campaign manager, Scott Schmidt, great work!

Looking forward to the measure that will overturn measure C. I should have the option to vote for anyone that I want to, no matter how long they’ve held the office. Schmidt/Meister/Martin would have us believe that we are too stupid to make up our own minds.

As I was voting yesterday, the guy voting next to me was asking the poll judge why he couldn’t find Mayor Villaraigosa on the ballot. The poll judge asked him if he lived in Los Angeles or West Hollywood, and after a long pause, he finally managed to say, “Well, both.”