Stick with WEHOville throughout the day as we provide updates of the election.

The story of the night is Prang and Duran holding their seats, but residents convincingly approving Measure C (term limits).

About 35 people at the Kitchen 24 party.

No live feed here either. They’re getting their results on a laptop, so party rather subdued.

Sam’s mother is here from Massachusetts. She says she’s proud of her “No. 1 son.”

About 50 people here. Subdued party as there is no TV feed. They’re getting results from the city website.

Steve Martin feeling optimisitc even if he’s currently in 3rd place. He says the absentee ballots should help him. 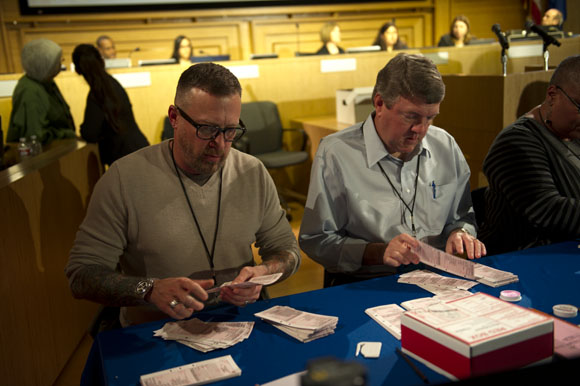 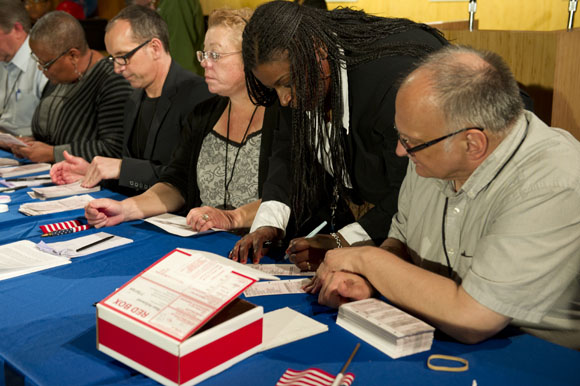 9:41 p.m. — Reporter James Mills is out at the campaign parties tonight, reporting from those scenes. His report from the Duran/Prang party:

About 100 people. Duran thanked his “dogs” for working so hard on his campaign. A deliberate reference to Steve Martin’s comment from last night’s council meeting.

Eric Bauman, chair of LA County Dem Party, said elections should not be used as “psychotherapy to work out issues,” going so far as to get measures put on a ballot.

Prang and Duran both optimistic.

9:35 p.m. — West Hollywood West would seem to be a strong area for Steve Martin, but numbers are neck-and-neck with Duran. Could be a bad early sign for the former council member. Also worth noting very low opening number for Borelli.

From precinct 71 (which is West Hollywood West territory), here are the tallies: 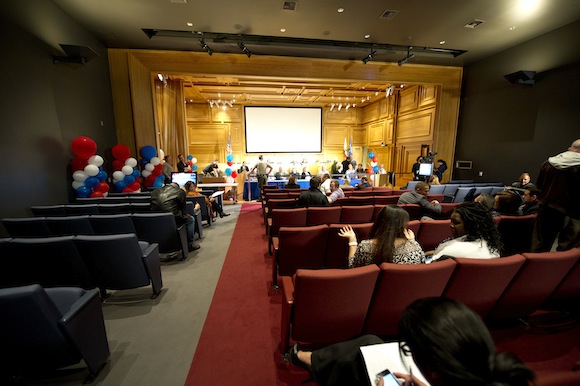 7:30 p.m. — As the evening in West Hollywood cools to 55 degrees, and we near the 8 p.m. deadline for casting a vote, the race for two seats on the West Hollywood City Council grows more and more heated. Supporters of challenger Christopher Landavazo are circulating online a video that purportedly shows incumbent John Duran removing a Landavazo campaign sign and throwing it in Duran’s own trash container. It’s impossible to tell from the video, which is blurry and shot from a distance, whether the man removing the Landavazo sign is Duran.

In fact, it’s impossible to tell whether the man being filmed was actually removing a sign at all. The videographer, in a second clip, opens what he says is Duran’s trash container and finds a Landavazo sign.

The lack of clarity hasn’t stopped partisans in tonight’s highly contentious race from, on the one side, circulating the video and condemning Duran and, on the other side, condemning the video as a malicious attack on Duran.

One of Duran’s most ardent supporters, Ryan Gierach, whose WeHoNews website has promoted Duran’s re-election, argues that even if the man in the video is Duran, he’s doing the right thing. The man in the video, Gierach says, “… was helping the city with a problem about which staff has long known but not taken action on for fear of being perceived pro-incumbent. You see, he removed the sign from a city-owned greensward. It is illegal to plant campaign signs on city property.”

Gierach, who has boasted that Duran has provided him support when he was in financial distress and helped him briefly forestall an eviction from his apartment, has endorsed both Duran and incumbent Mayor Jeffrey Prang.

Landavazo and incumbent Steve Martin are the only two among five challengers who have focused their criticism on Duran, who has returned the favor, at least in the case of Martin, with a series of campaign mailings by his campaign and an independent group funded to support him.

All of this raises the question, if Duran is re-elected and either Landavzo or Martin take Prang’s seat, who will speak to who on the West Hollywood City Council? Councilmember John Heilman famously has refused to shake Councilmember John D’Amico’s hand, and D’Amico says Heilman won’t speak to him either. And Martin and Prang, roommates years ago, no longer are on friendly terms. 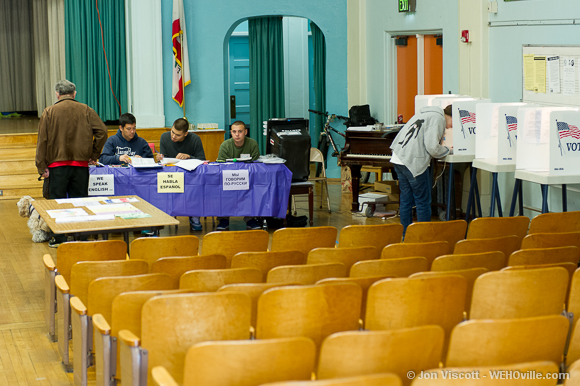 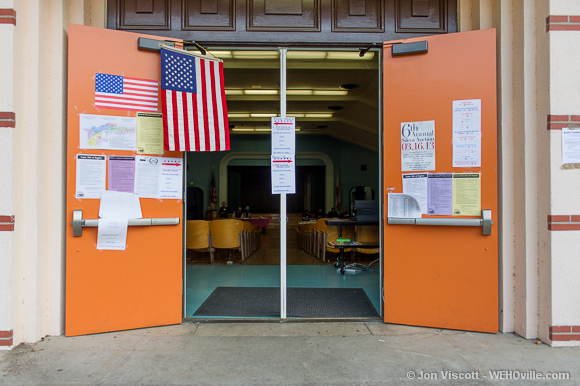 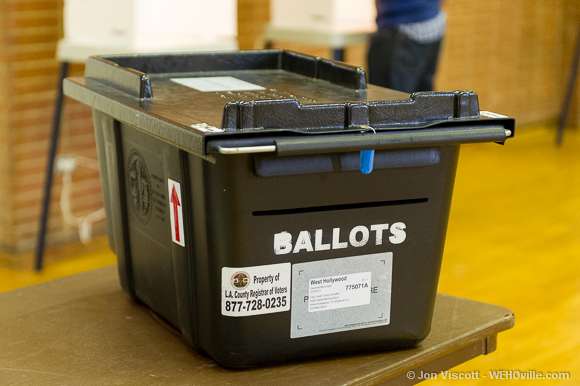 2:20 p.m. — A sneak-peak (shoosh, don’t tell anyone) of the “Central Counting Place” at the council chambers, ready for tonight’s show and results. 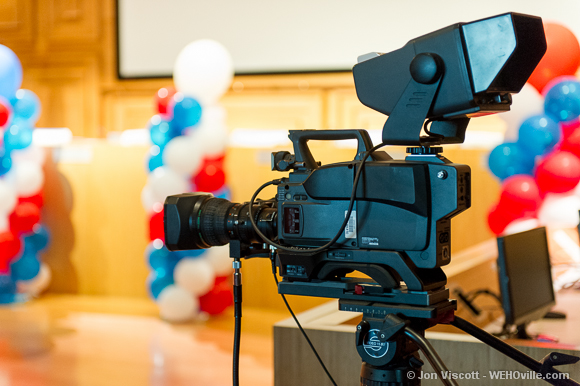 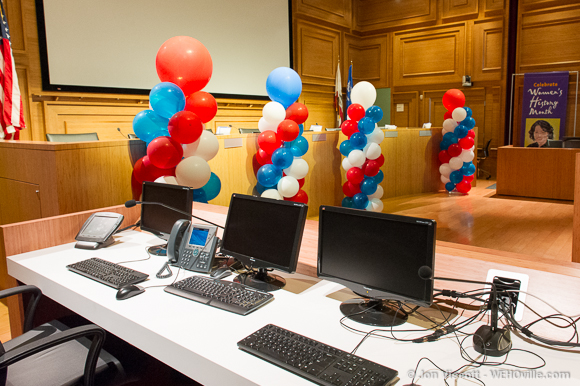 1:40 p.m. — Here’s a little logistics report for those of you wondering how the results will come in tonight.

The “Central Counting Place” will be at the Council Chambers, which is the West Hollywood Park Public Meeting Room (625 N. San Vicente Blvd.), and where the council meetings are held.

As the night goes on, the city clerk will read off the total number of votes from each precinct, and at the end of the night will provide “unofficial results.”

Finally, any remaining ballots that need to have their signatures verified will be processed for “official results.” The city council “certifies” the results at its March 18 meeting.

All the results will be posted at www.weho.org/elections.

1:23 p.m. — Wondering where the parties will be tonight? Here’s where the candidates will be:

– Mayor Jeffrey Prang and Councilmember John Duran: The Robertson Nightclub. Robertson owner Sam Sharif will host a party at his nightclub for the incumbents from 7:30 p.m. to 1 a.m. “Both men are amazing leaders of the LGBT community and have been strongly supportive of the vibrant and safe LGBT-friendly community that we all know and love,” Sharif said. The Robertson is at 665 North Robertson Blvd., at Santa Monica.

– Steve Martin: Eleven Nightclub. A “community celebration” will be held from 8 p.m. to 11 p.m. on the second level of the nightclub, at 8811 Santa Monica Blvd. at Doheny. Attendees are asked to rsvp at sos@wehotermlimits.com. Martin’s party is also doubling as the Measure C (term limits) party.

– Sam Borelli: Kitchen 24. Borelli holds his campaign party at Kitchen 24 from 8 p.m. to midnight. Food will be provided but there is no host bar (there are happy hour prices). Street parking or two-hour validated parking are available at the Ramada. Kitchen 24 is located at 8575 Santa Monica Blvd. at Westbourne.

– Christopher Landavazo: Mirabelle’s Restaurant. Wine & Hors d’oeuvres provided at this hosted party from 7:30 p.m. to 11:30 p.m. Rsvp with Julie Pimer at juliepimer@gmail.com. Mirabelle’s is at 8768 Sunset Blvd. at Holloway.

Supporters of Duran held up campaign signs near the front of the council chambers, prompting a few other attendees to shout out “rude! rude!” as they claimed their view was blocked.

Martin took to the podium and called their action “fascist” and told Duran to “send your dogs out.”

Watch the video below:

May I also thank, praise and honor Steve Schmidt, Lauren Meister, Sheila Lightfoot, Allegra Allison, Larry Block, Steve Martin and the entirety of our group Protect Plummer Park for making Measure C happen. You all know who you are and if I have been short on names – I am long on gratitude and awe. Thank you and let’s keep the movement going forward.

What if the city invited everyone to an election and almost nobody came? The unvarnished truth: Voter turnout was embarrassing. Look at the totals. Look at how a small city of 35K+ – a city of whiners, freeloaders and serious activists for change – scored in an important and costly election. Look at how at least a few souls walked and the rest talked. And the rest will keep talking and cracking wise on every damn thing that upsets them until the next unattended election. Smug incumbents are validated in their smugness and voices for fresh ideas and change are… Read more »

Interesting since in previous elections, the city attorney claimed campaign posters were considered freedom of speech when there were complaints to code compliance of campaign posters placed in the Santa Monica Blvd median. But then again Ryan has misrepresented on more than one occasion.