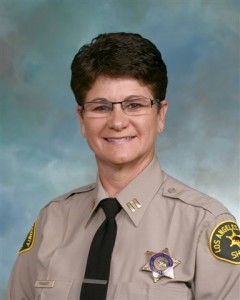 With this promotion, Fraser will be leaving the station, moving to a new position to help overhaul the trouble plaguing the Los Angeles County jail system.

Fraser, who took charge of the West Hollywood station in May 2010, said she is not sure when her last day in West Hollywood will be. The city will interview for a new station captain shortly.

“As a community, we will be potentially worse off without her, but I’m certain that the sheriff’s department will give us the opportunity and make sure that whoever comes next will do their best to fill those intensely beautiful shoes,” said Councilmember John D’Amico.

I liked Kelly from the first meeting. We will be diminished by her leaving but have been greatly enriched by her watch as Captain of the WeHo Sheriff’s Staion. Best wishes Kelly from Chloe Ross

Commander Fraser, great thanks for all your outstanding service to West Hollywood. You’ve been a tremendous asset to the community and you will be missed!