Legitimate issues of the City of West Hollywood continue to be distorted by a group of individuals driven by a few who appear to lack integrity and regularly invalidate themselves by words, actions and bad judgement. These folks have failed to move beyond feeling wronged and gracefully accept issues that have either been litigated or decided by vote.  There isn’t a missed opportunity to disrespect current council members, their deputies, city staff and independent residents.

Unfortunately sweeping angst and anger morphed into Measure C for term limits, obscuring fresh ideas and the very real concerns about exorbitant campaign contributions from within and beyond the city. Term limits and the relief provided is still many years in the distance with campaign financing still unaddressed. 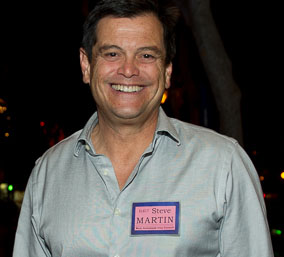 Steve Martin, an otherwise intelligent and able individual, has apparently lost perspective and appears lacking in judgement by allowing himself to be the champion of their discontent.

Had he prevailed, he most probably would have been rendered ineffective resulting from his perpetual alienation of the current council, their deputies, the staff and again a broad swath of the community. Where would he have found consensus?

Mr. Martin had every opportunity to shift his own focus, that of his followers and embark on a fresh, respectful approach to problem solving in delivering his message. The message, the means and the messenger need to reveal integrity, credibility and good judgment.

One of the best things that could happen in WEHO is an interest in positive comments and positive solutions, independently and collectively. I am personally not one that needs or wants to be in the forefront. There are several reasonably important things that have been accomplished without fanfare even in your immediate neighborhood that you may not be aware of. They relate to larger issues in the big picture.

I’ll start listening to lynn when she actually makes something good happen in weho….until then, the word blowhard comes to mind

Hi Shiela, thanks for your comment. While I have no need or interest in being in the forefront of anything but my own business and projects, I am happy to function as a collaborator where I can be useful. Steve Martin expressed a spontaneous opinion to me when I made a statement regarding regarding runaway campaign contributions and unless they were reformed, they would most probably continue within an inch of the law. Even if term limits are in place the same entities will attach themselves to new council members as it is unfortunately, the nature of the beast. Steve… Read more »

Dear Lynn, I look forward in the coming months to seeing you at the forefront, using your formidable diplomatic skills, bringing forward fresh ideas and working with “current council members, their deputies, city staff and independent residents” to bring about change in what you describe as your ”very real concerns about exorbitant campaign contributions from within and beyond the city.” Perhaps you can set the example to show us all how to go about achieving change with your “fresh, respectful approach to problem solving.” I will happily wait and observe your more successful methods “to limit seemingly runaway campaign contributions… Read more »

Good Morning Virginia. I actually don’t feel one way or another about it. John d’Amico has a right to his opinion. Beyond that sometimes it clearly helps if someone provides the true facts regarding how a change of mind takes place. Folks in public positions owe that to the people they serve. Every individual’s decision finally accumulates in the credibility and reasonability column which often is more important than the decision itself.

Hi again Sal. Seems we both appreciate seeking solutions without leaving a stone unturned. My feelings are that with many similar type issues repeatedly recurring, the community has an opportunity to speak and meet with council and city staff to help craft provisions that would in some cases change an ordinance or policy hopefully for a more favorable outcome. The path to development and its possible incursion into historic and potential historic sites could use critical adjustment and also bring more knowledge to the table. Much has to do with the tone of the approach. Folks bringing short attention spans,… Read more »

Hi Lynn, For starters, I do resent the notion that I was unwilling to listen to reason or the facts as they pertain to The Lot. I do respect your experience in dealing with all levels of your local government however, with the number of years I have logged in dealing with a number of corporate hierarchy, city officials both in WeHo and other cities, negotiating contracts through local unions and taking up the fight to save Pickford Fairbanks, one thing I have learned is that there is always a better way. There is always an alternative solution. And even… Read more »

Hi Sal, it is disappointing to hear your reaction. Realizing that you have become acquainted with local issues initially through the future development at Pickfair Fairbanks Studio aka The Lot , I think it might be fair to say that perhaps you are do not have the benefit of context for some of the observations. Many folks in the community followed that particular issue from its beginning several years ago in an effort to be informed and offer alternative ideas. It all seemed rather respectful although not everyone was thrilled with the outcome. What was surprising was that many of… Read more »

A very nicely crafted anger ridden op-ed but lacking in any real substance. Is there any clear offer of any vision that will be hampered by Measure C.