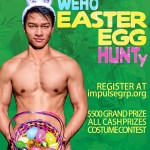 For those who miss Easter this coming weekend, Impulse Group is offering a second chance to celebrate.

Impulse Group, a group of young gay men focused on educating their peers about HIV, is organizing the “WeHo Easter Egg Hunty” on April 21. Participants will meet at noon at West Hollywood Park on San Vicente Boulevard south of Santa Monica. Each team of two will receive a map of stopping points on the hunt. At each stop participants will be asked a question about HIV or other sexually transmitted diseases and be given an egg that includes the correct answer.

The winning team will receive a cash prize of $500. Other prizes are given to second and third runners up. Registration, $20 per team of two, can be done online. Proceeds will go toward supporting Impulse’s mission to educate young gay men about HIV and other sexually transmitted diseases. Impulse was formed in 2011 with the support of the AIDS Healthcare Foundation .