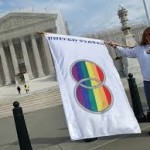 Websites, newspapers and TV and radio broadcasters are bombarding us with news and analysis of the U.S. Supreme Court’s hearings today and tomorrow on the legality and constitutionality of same-sex marriage. Here’s a primer on what is on the court’s agenda, what’s at stake in its rulings and what the possible rulings might be, along with some often provocative commentary about the possible impact of its decision.

What’s On the Agenda? The court agreed on Dec. 7 last year to take up two cases related to same-sex marriage. Today the court is hearing an appeal by proponents of Proposition 8, the California constitutional amendment passed by voters in November 2008, which provides that “only marriage between a man and a woman is valid or recognized in California.” That proposition, also called the California Marriage Protection Act, was overturned on Aug. 4, 2010 by U.S. District Court Judge Vaughn Walker in Perry v. Schwarznegger.

Walker ruled that the proposition violated both the Due Process and Equal Protection clauses of the United States Constitution. He issued an injunction against enforcing the law, which was stayed, or blocked, until Proposition 8 supporters could appeal his decision. The Ninth Circuit Court of Appeals affirmed Walker’s decision but continued the stay until proponents of Proposition 8 could appeal to the U.S. Supreme Court. Thus no same-sex marriages have been allowed in California since passage of Proposition 8.

Gov. Jerry Brown and Attorney General Kamala Harris have declined to appeal Judge Walker’s decision. So today’s argument to overturn Judge Walker’s ruling, labeled Hollingsworth v. Perry, is being made by Charles J. Cooper, a former lawyer in the Reagan administration. He was engaged by various supporters of the proposition, led by Dennis Hollingsworth, a California state senator representing the 36th District, which includes portions of San Diego and Riverside County. The appellant is Kristin Perry, who was denied a license in Berkeley to marry her partner, Sandra Stier.

United States v. Windsor, the challenge to DOMA, is being brought by Edie Windsor, an 83-year-old woman from New York who was confronted with a $363,000 federal estate tax bill when her partner of 40 years, Thea Clara Spyer, died in 2007. A federally recognized spouse would not have been required to pay that tax. The Supreme Court is only being asked to rule on the constitutionality of Section 3, which says that “the word ‘marriage’ means only a legal union between one man and one woman as husband and wife, and the word ‘spouse’ refers only to a person of the opposite sex who is a husband or a wife.”

In June of last year, U.S. District Court Judge Barbara Jones ruled Section 3 to be in violation of the Equal Protection Clause of the U.S. Constitution. The U.S. Department of Justice has declined to appeal her ruling, with Attorney General Eric Holder and President Obama saying they believe DOMA is unconstitutional. So the appeal before the Supreme Court is being brought by the Bipartisan Legal Advisory Group (BLAG), a five-member committee of the U.S. House of Representatives. Despite the objections of its two Democratic members, BLAG has opposed challenges to DOMA in California and now before the U.S. Supreme Court. Windsor and Spyer are profiled in a slide show in New York magazine.

What’s at Stake: The court is expected to make its decision on both appeals in June. There are four decisions the court could make regarding Proposition 8, each having a different impact:

1) If the court upholds Proposition 8, same-sex marriages no longer will be legal in California.

2) The court could overturn Proposition 8 on procedural grounds, for example arguing that Hollingsworth’s group is not injured by the decision to overturn the proposition and thus has no legal standing to appeal it. In that case, the case will be returned to the Ninth Circuit Court of Appeals in San Francisco, which likely will affirm Judge Walker’s decision and legalize gay marriage in California.

3) The court could rule that denying marriage to same-sex couples is unconstitutional, thus voiding same-sex marriage bans across the United States. Legal scholars say such a decision would be as significant as Brown v. Board of Education, which ruled school segregation unconstitutional, and Roe v. Wade, which legalized abortion.

4) The court could rule that only Proposition 8 itself, not a state ban on same-sex marriage, is unconstitutional because it removes a right granted to same-sex couples in state court rulings in 2008 that briefly opened the door to same-sex marriage in California. The impact of such a decision would be limited to California.

5) The court could rule that Proposition 8 is unconstitutional because California cannot provide same-sex couples with the benefits and responsibilities of marriage with civil unions and withhold the designation of such unions as “marriage.” With such a decision, bans on same-sex marriage in the eight states that now grant only civil unions would be unconstitutional. In addition to California, those states are Delaware, Hawaii, Illinois, Nevada, New Jersey, Oregon and Rhode Island.

In the case of DOMA, there are three possible decisions:

1) The court could uphold DOMA, continuing a federal law that the Obama Administration and its Justice Department are reluctant to enforce but making federal benefits unavailable to same-sex married partners.

2) It could rule that DOMA is unconstitutional, granting to married same-sex couples in states that recognize their marriage the same rights and benefits the federal government grants to heterosexual married couples.

3) Or, less likely, the court could rule that it has no standing to decide the case, given that Windsor and the Obama Administration argue that it’s unconstitutional and that BLAG has no legal standing to appeal Judge Jones’ decision. In that case, Windsor would get a tax refund of $363,000. But it is unclear what the overall impact on DOMA would be.

The Impact of the Rulings: Legal scholars on both sides of the same-sex marriage rights question have different opinions on how the Supreme Court should rule and what the impact of various rulings would be. David Cole, a law professor at Georgetown University and a supporter of same-sex marriage, argues in The New York Times that DOMA should be struck down. But he says a Prop. 8 ruling that makes same-sex marriage bans unconstitutional in all states would galvanize opposition to a concept that is slowly gaining acceptance on a state-by-state basis. He cites the growing opposition to abortion rights since the Court’s decision on Roe v. Wade as an example. Michael McConnell, a law professor and director of the Constitutional Law Center at the Stanford Law School, and a senior fellow at the Hoover Institution, the conservative think tank, takes a somewhat similar stance for different reasons in the Wall Street Journal. He argues that the court should validate Proposition 8 and strike down DOMA. McConnell says such a decision would leave the issue of same-sex marriage to the states. The New York Times’ editorial page, in an editorial entitled “A 50-State Ruling,” disagrees with both, arguing that bans on same-sex marriage should be declared unconstitutional across the nation.

I listened to and then read the transcript of the today’s court proceeding at the Supreme Court. I was not impressed by it on either side. The issue of standing is an important one that I understand, but I don’t and it was the first part of the arguments. I thought Cooper dithered until I heard Olson dither even worse. In terms of the gay community being a class or not – it seems that they were not considered that and yet that distinction seems so clearly at the root of the issue that I was surprised. If they were… Read more »