Tower Records was a fixture on the Sunset Strip for 36 years. But the 8801 Sunset Boulevard site has a long history, predating Tower Records.

In the 1950s, after Dolores on Sunset closed, a diner named Jacks on the Strip opened in that location.

In the early 1960s, the building was demolished and replaced by a 900-square-foot concrete and glass building that served as the showcase apartment for the luxury, high-rise Shoreham Towers apartment building. Shoreham Towers was constructed a half a block up Horn Avenue.

After Shoreham Towers was completed in 1964, Earl “Madman” Muntz took over the building. Known for his wild advertising tactics, Muntz had previously built no-frills, bare-essentials TV sets and also cars, including the Muntz Jet sports car with a V-8 engine. But when he came to Sunset Boulevard, Muntz sold car stereo systems.

Muntz developed the 4-track tape cartridge, which played pre-recorded music on a continuous loop. The “Muntz Stereo-Pak” 4-Track tape cartridges proved popular as it allowed people to listen to albums in their cars for the first time. A 2007 “Los Angeles Times” article reports that Muntz sold 300,000 units in 1966 and licensed the rights to 75,000 songs.

The 4-track tape was soon usurped by the superior 8-track tape cartridge, developed by Bill Lear, who also founded the Lear Jet Corporation. Muntz’s car stereo installation center closed in 1970 and the building was demolished.

In its place, a new 8,660 square foot building was built with Tower Records as its tenant. It was the first Southern California location for the Sacramento-based Tower chain and quickly became its flagship store thanks to its proximity to the music industry which had migrated to Los Angeles from New York in the 1960s.

The 1974 “Guinness Book of World Records” listed the Tower Sunset location as the “largest record store in the world.” Known for its deep inventory of records – not just current albums, but older albums as well as obscure albums – Tower Records became a destination for music lovers. People were known to spend hours going through the bins.

Celebrities sightings at Tower were common. The Seeing Stars website reported that Elton John made Tower Records his first stop upon arrival in Los Angeles. Ben Affleck, Michael Jackson, Leonard Nimoy and Jackson Brown were all spotted there as well.

In the 1970s, the Sunset Strip became known for its prolific billboard advertising, especially by musicians and record companies promoting new albums, according to Robert Landau’s “Rock ‘n’ Roll Billboards of the Sunset Strip.” The Tower Record store joined in, covering its many windows with advertising for albums, sometimes using the entire side of the building facing Sunset to advertise a single album.

Aerosmith, Boys II Men, Mariah Carey, David Lee Roth, Beach Boys founder Brian Wilson and the surviving members of The Doors are just a few of the acts that signed autographs at Tower Sunset in the late 1990s, according to the Seeing Stars website, while Duran, Duran, Rod Stewart, David Cassidy and Ricky Martin all did free concerts in the parking lot.

In 2006, the Tower chain declared bankruptcy and the Tower Sunset location closed. The clothing and gift store, Live! on Sunset operated out of the building for five years after that, closing in November 2012.

But, for those who want to get a feel for what the store was like, the interior of the Tower Sunset location was faithfully recreated for the 2012 musical “Rock of Ages,” which was set on the Sunset Strip in the 1980s. 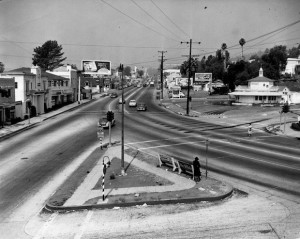 loved the fried chicken at “Mildred’s” restaurant, that used to be the on the Tower Records corner.
Her daughter Veda was a bit of as brat, never lifted a finger at the restaurant, and was a bit of a snip.
Wonder what ever became of Mrs. Beragon and her daughter…hmmm.?