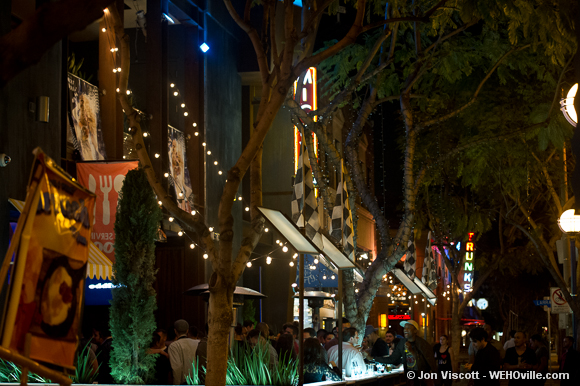 The West Hollywood City Council has approved a six-month pilot program for a free “entertainment shuttle” to travel along Santa Monica Boulevard .

Set to start in July, the shuttle, which the council approved at its Monday meeting, will make 15-minute runs from Doheny Drive to Fairfax Avenue with a detour to the West Hollywood Public Library parking deck on San Vicente Boulevard. It will operate on Fridays and Saturdays from 8 p.m. to 3 a.m. The city will rent two buses for $62,000, and spend $25,000 to market the shuttle.

Councilmember John Duran, who first proposed the idea a year ago, said residents can leave their cars at home but still enjoy the nightlife in the Boystown area on the west end of Santa Monica Boulevard or in restaurants and clubs on Santa Monica closer to Fairfax. Similarly, visitors can park their cars once and still get around town.

The initial idea was to have the trolley go on a loop that would include the Sunset Strip, but city staff members said that would reduce the frequency of trolley stops. If the pilot project is successful, the Sunset Strip area could be added either as a part of a loop or with a separate trolley.

The city will create a task force of residents it deems most likely to use the shuttle to help guide its launch.

While the council unanimously approved the shuttle, council members did debate the project’s target audience. Both council members Abbe Land and John Heilman worried that only residents would use the shuttles and that the concept would be lost on tourists. Mayor Jeffrey Prang said he wished the city had hired an outside consulting firm to research the need for ridership. When Land asked city staffers how many weekly and monthly riders would be needed to consider the project a success, they couldn’t provide an answer.

Councilmember John D’Amico said he hoped the shuttle would be launched in time for Gay Pride festivities in June.

Duran said the key to the shuttle’s success was ensuring the public perceived it as a fun way to get around. “If people think they’re taking a bus, they won’t take it,” he said. “If they think it’s public transportation, they won’t take it.”

Resident Sam Borelli asked why the trolley was turning around at Fairfax Avenue rather than going further into the city’s Eastside. City staff members said if the pilot project is successful, the city could consider adding more Eastside stops.

We’re all one city here people, east, west or whatever. I happen to enjoy living on the quieter east side yet still have access to all the fun on the west. Is it really necessary to have bickering and one upsmanship between two “sides” of an already small city?

The City may be 2 sq mi but “Boystown” the distinctly gay part of town is only a mile on the westside. The trolley is servicing bars in both directions from the Abbey to Gym to Hamburger Mary’s to Fubar. If the line were extended what would be the next logical bar stop? Astro Burger? Best Buy?

@Snarky Gal – Exactly! Walk a mile in the dark, at 2:00am when we are told it is not safe to do so. And @ Don…Really? You pay more to live on the Westside so you should have a free shuttle? There are 1bdr apts on the eastside that have been as high as $2,200.00. Besides maybe if you are so wealthy over there you could afford a buck or two for the shuttle. WeHo is 2 sq. miles, Fairfax to La Brea is 1 mile, hence Free shuttle is leaving out ONE HALF of the city. Is the trolley… Read more »

Why does Duran constantly call West Hollywood “Boystown”, that’s an aging circuit queen term and so isolating. We have a diverse community here. Also, why only run the shuttles on SM Blvd. What about Sunset??? An easy loop.

It would be hard for me to not support the trolley.. since I own the BlockParty store but quite frankly.. im wondering if this shouldnt be outsourced to private enterprise. The city is taking on a big liability. And if the pilot program goes past Halloween its doomed. Business drops off so drastically between Halloween and Christmas. People are busy traveling or at office parties. January is busier than December. This should have been a summer program from Memorial Day to Labor Day. But.. I hate to see a good idea fail because it was poorly timed or planned.

“It is a mile from La Brea to Fairfax. Why should the Eastsiders have to walk that far while the Westsiders, who live in closer proximity to the bars, have the free shuttle?”

Because we pay more to live in the Westside…

“The eastsiders can walk to Fairfax fairly easily where the true “Boystown” draw starts at Fubar.”

It is a mile from La Brea to Fairfax. Why should the Eastsiders have to walk that far while the Westsiders, who live in closer proximity to the bars, have the free shuttle?

As usual, the East side gets the shaft.

Great move by the council. I’m glad they went for a modest proposal to keep things concentrated in Boystown for now. This way we can really see if there is a need. To be frank, Boystown is the most likely venue for a trolley as people on the Strip typically park at the venue *hotel” and are not commuting on foot. The eastsiders can walk to Fairfax fairly easily where the true “Boystown” draw starts at Fubar.

Well…Duran says residents can leave their cars at home but still enjoy the night life in the Boystown area on the west end…and as usual the east end gets the shaft. East enders will have to get in their cars and try to find one of those extended hours meters. No free shuttle for those folks…even though it is also their tax dollars at work. Typical and business as usual. Since this is not a revenue stream, how will they deem it a success or failure?