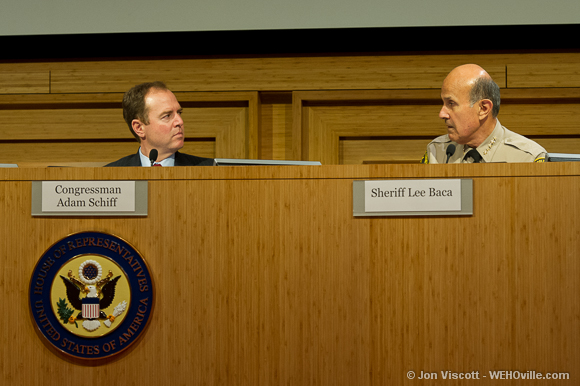 U.S. Rep. Adam Schiff emphasized providing easier access to mental health services as a way to curb gun violence at a forum he convened and moderated on Wednesday night at the West Hollywood City Council chamber.

“The shooters in Aurora, Tucson, Sandy Hook, Virginia Tech, all had a history of mental illness of one variety or another,” said Schiff, who represents the 28th district, which includes West Hollywood. “Obviously, any comprehensive solution to the gun violence problem has got to have a strong mental health component.”

“The LA County jail is the largest mental hospital in the world,” said Baca, who added that the jail system spends a huge amount of money on psychotropic drugs each year.

West Hollywood Councilmember Abbe Land said the city’s history of enacting laws to reduce gun violence (including enacting the nation’s first ban on the sale of “Saturday Night Special” handguns) was the reason she urged Schiff to hold his forum in West Hollywood.

“I know that not everyone agrees with what we do in West Hollywood, but it’s important to see where we might be able to find common ground so we can work to at least get weapons like assault weapons off the streets, making sure that victims have the services they need and helping to educate in schools so there’s access to mental health services,” Land said. “People disagree on some things, yes, but I think there’s a lot we do agree on. I don’t think anyone wants to see innocent people mowed down.”

Research by WEHOville found 2,581 handguns and long rifles have been registered in West Hollywood, a city with 24,599 households. Assault rifles and handguns, such as the Bushmaster AR-15 rifle used in the Newtown, Conn., elementary school massacre, are few and far between, accounting for only four of those registered.

Calls to overhaul the nation’s gun laws have intensified in the 100 days since the massacre at Sandy Hook Elementary School. However, President Obama has not been able to gain the support of Republican legislators for his proposed bans on assault weapons and high-capacity ammunition magazines. A strong campaign against gun-control measures by firearms advocates also has stalled months of negotiations for background checks on gun purchasers.

Opponents of gun control have insisted that gun violence can be curbed by more accessible treatment for the mentally ill, which was much of the focus of Wednesday’s West Hollywood forum, rather than restrictions on gun ownership.

State and federal budget cutbacks have made it more difficult for people to get mental health treatment, said Pandya. Often people have to get arrested before they start getting help for mental problems.

“Why is it easier to get a gun than mental health care?” he asked.

A provision of the National Instant Background Check System used to screen potential gun buyers prohibits people who have been “adjudicated as a mental defective or committed to a mental institution” from purchasing guns. Pandya said some people are reluctant to seek treatment for mental illness because they don’t want their right to purchase a gun taken away.

Baca said that while Los Angeles is the gang capital of the world, the city also has a record low amount of gun violence when compared to other places thanks to the state’s restrictive gun laws. He called for stronger federal gun laws, saying, “we’re the most intelligent nation on Earth, but on this issue, we’re dumber than dumb.”

Participants in the forum also discussed a legal loophole that allows people to buy guns at gun shows without undergoing a background check, something Schiff and some other federal legislators want to eliminate with the “Gun Show Loophole Closing Act.” However that bill, introduced in 2009, has not been brought to the floor of either chamber of Congress for a vote. Schiff said almost 40 percent of all gun sales are done in private transactions such as at gun shows.

Los Angeles resident Loren Lieb compared this loophole to allowing people to get on a plane without going through the metal detector.

“In a lot of states, it’s easier to buy a gun that it is to buy a bottle of Sudafed (an allergy medicine),” said Lieb, the mother of a child injured in the Jewish Community Center shooting.

Schiff also drafted a bill in January that would let victims of gun violence sue gun manufacturers, distributors and dealers for negligence or product liability. A 2005 law now bars such suits.

Former state Sen. Scott, whose 27-year-old son was killed in a gun accident in 1993, said society’s concept of guns equating to masculinity needs to change.

“Something is wrong with the psychology that you’re a tough, brave man if you have a gun at your side,” said Scott, who helped pass several gun control bills during his time in Sacramento, including one makes carrying a concealed weapon without a permit a felony. Over 30,000 people are killed each year with a gun, Scott said, and 82 people die every day.

“If a plane went down every day with 82 people, we would do something about,” Scott said. “But 82 people die everyday of gun fire in the United States and we seem to be helpless about really taking any action on this matter.”

Lombard, a member of the local National Rifle Association, argued that many of the statistics about guns that were cited were based on 20-year-old studies or studies that had very small samples. He said that while he believes the Second Amendment gives him a right to own guns, he also worries about gangs and gun violence. Supporters of control agree that there is a paucity of research on gun violence, largely because the NRA has successfully lobbied to ban federal spending on such research. 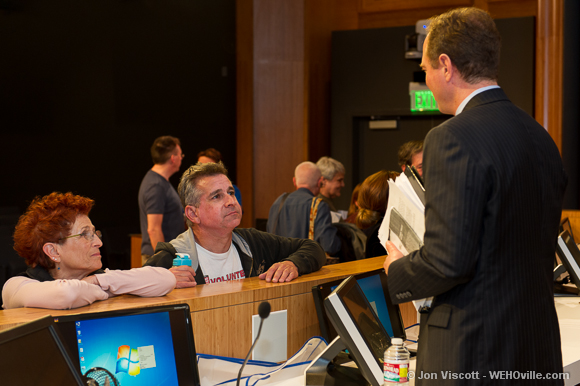 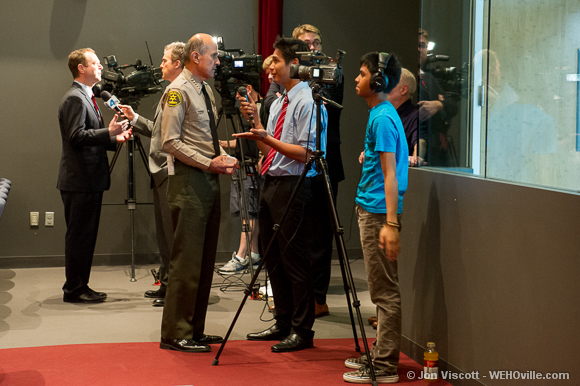 Criminals rob stores where they know there are cameras and witnesses and possible police driving bye. The most important deterrent to criminals invading your home is the fact that the person in the house may be armed. If we disarm all of our citizens and assure the criminals that all residents are not armed then criminals would be more likely to invade our homes knowing that the residents do not have any firearms. The thought of a homeowner having a firearm is the greatest deterrent to home invasion. Passing laws that the law abiding citizen will obey has no effect… Read more »

For society does not control crime, ever, by forcing the law-abiding to accommodate themselves to the expected behavior of criminals.

Society controls crime by forcing the criminals to accommodate themselves to the expected behavior of the law-abiding.” —Jeff Snyder