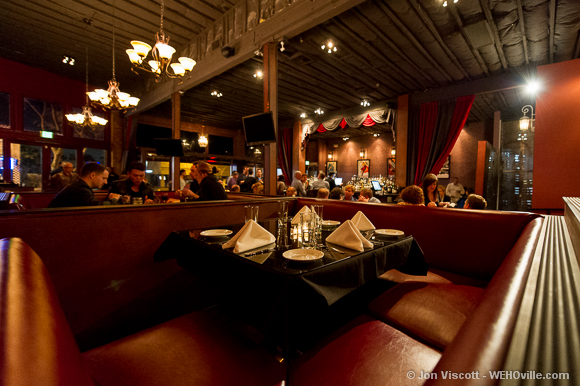 West Hollywood’s long-awaited cabaret restaurant is neither a cabaret nor much of a restaurant. And like the dreams of stardom that its piano bar fosters, this venue’s own road to greatness in WeHo may be just as long and winding.

Don’t Tell Mama opened in New York City 30 years ago. The East Coast mothership offers cabaret nightly, but West Hollywood’s outpost has not yet sought expansion of its conditional use permit to allow cabaret, opting to take things slow. Also, Ryan O’Connor, Don’t Tell Mama’s artistic director, resigned less than a month after February’s big opening night on Santa Monica Boulevard. He cited “artistic differences” with the owners and management. But the show must go on, and so it has. 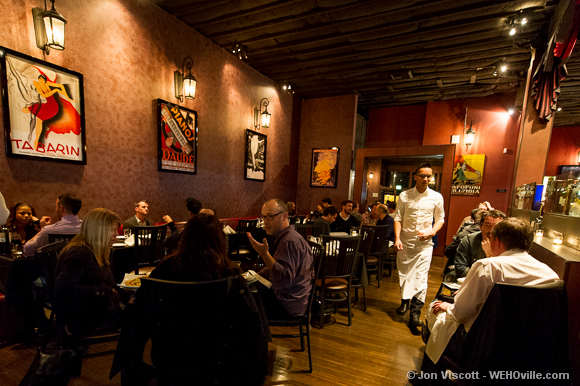 But when I enter Don’t Tell Mama one Friday night, my focus is on the food. Standing at the door, the noise level is mind-numbing. A bar stretches down the center of a long sparsely decorated room. Patrons jostle at the bar and yell into each other’s ears to be heard over a young male pianist singing a rollicking version of Elton John’s “Bennie and the Jets” from somewhere in the back.

I catch a glimpse of a spotlight glinting off a boom mic, the performer’s head barely visible above the crowd seated around him. The noise level rises as sections of the clearly inebriated clientele parrot the singer as he belts the tune’s familiar, falsetto refrain of “Ben-nay! Ben-nay! Ben-nay!”

The hostess whisks me to the quieter dining area set up behind the bar with comfortable café chairs and tables with white linens on black tablecloths. All of this beneath bright small stage lights. French cabaret posters line the walls. I order a drink and it’s alarmingly generous. This goes a long way in demystifying the noise level.

The waiter suggests starting with guacamole, but he shouldn’t have. It’s the consistency of mousse, the purée robbing each garden ingredient of its identity. Also, the dish is served with taro chips instead of tortilla chips. I suspect this to be an ill-conceived attempt by a New York-based establishment to placate Californians. Overthinking Mexican food is never a good idea.

Wait, amend that. Underthinking it is bad, too. Take the ambitious disaster that is the Mexican Shrimp Cocktail with Avocado, Cucumbers, Horseradish and Tomatillo Sauce ($15). The jumbo shrimp are fresh, but no amount of vigilance on my part can make the accompanying soupy sauce adhere to the shrimp in any way. I end up attacking the sauce separately with a spoon. It is as thin as tomato juice and “sabor” free. I shrug. Thankfully, these were the only two “Mexican” offerings. The rest of the options on the dining room menu are American stand-bys: burgers, fish, chicken and steak.

I turn my attention to a drag queen posing gratefully for pictures in the corner of the room, and I listen to music pouring in from the bar. The drink has loosened me up. I quit the table long enough to throw a tip in the piano man’s jar, and I ask him a few questions before I request Billy Joel’s “Miami 2017 (Seen the Lights Go Out on Broadway).” His name is Zak, and he was picked from DTM’s first round of local auditions. His rendition of the tune is solid, his voice strong and his keyboard work nimble.

Returning to my table I dig into Braised Beef Shortribs, Horseradish Parsnip Puree, Gremulata and Red Wine Reduction ($26). As is everything here, it is beautifully plated, but it lacks the technical proficiency that would allow some of the ingredients of that optimistic recipe to pop. Disillusioned, I feel thankful at least that I didn’t opt for one of the pricey steaks on the menu.

A reverent hush has come over the crowd at the piano bar. Pip from NBC’s “The Voice” (2nd season, Team Adam) is slaying “Georgia on My Mind” with the kind of vocal work that chills the spine.

On a hunch, I wrap up dinner and move to the piano bar and order a few things from its separate menu. The Kobe Sliders with Tzatziki and Crispy Onions ($15) are overpriced, but the cucumber sauce is an intriguing touch. Same goes for the Duck Tacos with Scallion, Apples, Tomatillo and Radish ($13) – too much for what they are, but juicy, flavorful and the best thing I’ve eaten.

The big drinks are hitting me now and I begin to sway with the music. And though the service there was flawless, I vow to stay out of the restaurant from now on, deciding it best to dive into the chaos by the piano bar, eating only from its menu and only if I’m going to fall over.

As the piano man vamps ironically with “Flight of the Bumblebee” I relax, convinced I have unlocked the secret of how to enjoy a Friday night at Don’t Tell Mama. 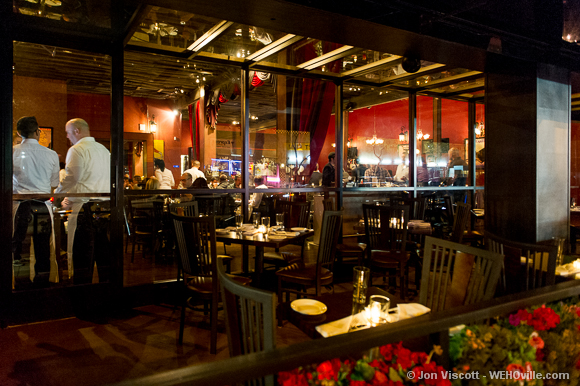 @ Cory: If you are under 25, maybe take a course on social interaction. If you are over 25, get some therapy. There are psychologists with a sliding scale. This review is right on, and you clearly can’t face that for whatever reason, and you’re embarrassing yourself.

Why do the gays in WeHo have to be so bitchy about everything?

OMG THIS IS HILARIOUS! THE GUY THAT WROTE THE ARTICLE IS LEAVING COMMENTS ABOUT HIS OWN BOOK WRITING?!!! LOL! DUDE, IT ONLY COMES UP YOUR GOOGLE BECAUSE YOU HAVE GOOGLED YOURSELF SO MANY TIMES!

This place was under construction for months and months and this is the layout they end up with?!?! There are three or four gigantic booths that take up half the room. There’s a bar right in the middle that splits the place up with a dinning area behind the bar. Lets be honest who would come here for a nice sit down dinner. LA is filled with good restaurants. You come to a piano bar for drinks, apps, bar food and more drinks. This place could make a fortune on cocktails and yet they have half the space reserved for… Read more »

@Prince of Thieves, I know, right? It’s like no one read the article. Mr. Tipper may have called the shrimp cocktail an “ambitious disaster” , but he also said the service he had was great and that the food was presented well. It just didn’t taste that good. That was my experience exactly.

We’re all dissapointed. We want business to succeed here, but you really got to step up your game if you’re going to last in a town that has so much great talent.

I’m not sure why readers feel the need to attack the critic. The review didn’t seem like a hatchet job to me; on the contrary, I thought it was overly forgiving. I ate at DTM two weeks ago after anticipating its grand opening for months. What a stunning disappointment. The acoustics are dreadful, making every note sound like a tinny screech, and the food was bland, tasteless and overpriced ($75 for a steak? Seriously, now.) . And yes, the cheap decor doesn’t enhance the dining experience, either. LA can be a callously fickle when it comes to new restaurants, and… Read more »

I agree with this review! Andrew, Luca, and Marco are on the right track. I sat at the bar for over 10 minutes before even 1 of the 3 people there noticed me. It was early and there were only 2 other people there! The food was OK but way overpriced. On 2 other occasions I walked in, heard all the loud noise, and left. And no Happy Hour food prices? Terrible decision.

Everyone was excited about this opening, but sadly I agree with the review. The menu is overpriced and uninspired for a neighborhood restaurant, especially since DTM Weho is not a cabaret and simply a piano bar. The décor is lackluster and the staff more concerned with their next song than their customers. Bar appetizers average from $11-$15 and Entrees average $20-$32. They offer no Happy Hour discount on food, so they are virtually double the price of every other Weho restaurant including the Abbey, St. Feliz and La Boheme for HH. I walked out of the bar on two separate… Read more »

The author nailed it. The restaurant isn’t that great, but the bar scene is.
I think that is pretty clear.

@Cory, Actually, a quick search shows that he has published two novels. is a nationaly published journalist and has released five albums of original music. I don’t know about you, but that’s more than I’ve accomplished. Also, a quick Yelp search of both Don’t TellMama and Rivabella shows that most people agree with him. I’m glad he’s writing for West Hollywood. I think he’s one of the best food writers I’ve read in L.A. He is accurate and paints a vivid picture. He hasn’t been wrong yet, and I read him all the time. All that aside, taro chips with… Read more »

WOW … THIS IS AN ODD HATCHET JOB … THE PLACE IS ALWAYS PACKED … I’VE HAD NOTHING BUT TERRIFIC EXPERIENCES!!! WAIT A MINUTE … WERE WE IN THE SAME RESTAURANT???