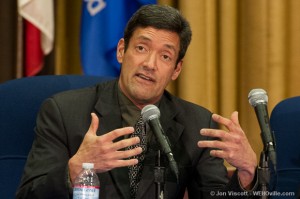 Under severe criticism for his statements on the death of a West Hollywood resident from bacterial meningitis, Councilmember John Duran reiterated his reasoning to the City Council on Monday night.

In a 10-minute speech, Duran, who is HIV positive, said he saw similarities between the meningitis case of 33-year-old Brett Shaad, who died Saturday, and the early days of the AIDS epidemic. He also said he linked Shaad to a deadly strain of meningitis in New York City after reading a New York Times article about meningitis among gay men published March 21. In New York, health officials have recommended all men who have sex with other men be vaccinated. At least 22 men have contracted meningitis in New York since 2010, four of them this year, and seven have died.

“Thank you for letting me be a bit shrill and alarmist,” said Duran, who received a round of applause at the end of his speech. “If you’d walked the path that I’ve walked, you might be too. I don’t want to see repeated in 2013 what we walked through in the 1980s.”

Cristin Mondy of the Los Angeles County Department of Public Health, who also appeared at the council meeting, said the department will not know until the end of this week whether the strain of meningitis that killed Shaad is related to the outbreak in New York City.

“We are not recommending vaccination for the general public because we only have one case, and we haven’t identified any other cases that are linked to this case,” Mondy said. “You may hear that in New York they are providing vaccinations, but that’s because they’ve identified it as an outbreak. They have, I believe, 22 cases. So, we’re monitoring right now very closely. Based on what we find, we will make recommendations.”

Mondy emphasized that meningitis is spread through oral secretions, not through sex. She encouraged people to see a doctor if they feel they are at risk.

On Monday night, Duran acknowledged the criticism of his actions, especially from younger people upset about the “shame” being cast upon the gay community by his reference to sex parties.

“Those of us who went through the epidemic the first time, we learned that it’s better to just speak the truth, speak the truth about what’s happening and let people act from there,” Duran said.

Duran, who apologized for intruding on the family’s privacy, said he stands by his statements about Shaad’s death. He said he never expected the story to go national, but that he was thankful social media helped spread the word after his press conference.

“It is in the community’s consciousness that there is a killer strain out there, and for that, I am grateful,” Duran said.

He thanked the AIDS Healthcare Foundation for offering to provide 10,000 doses of the meningitis vaccine for free, noting that 1,100 vaccines were administered on Monday. City Manager Paul Arevalo has up to $25,000 iavailable should more vaccine doses be needed.

Duran said he’d  seen Shaad over the previous weekend, seemingly healthy and fit. He said he was shocked by news of his sudden death from meningitis and immediately recalled the Times article.

“The wheels in my head began to turn very quickly,” he said. “I did want to get the word out to the community that if anybody else in West Hollywood or greater Los Angeles felt those symptoms to not assume it was just a bad flu.”