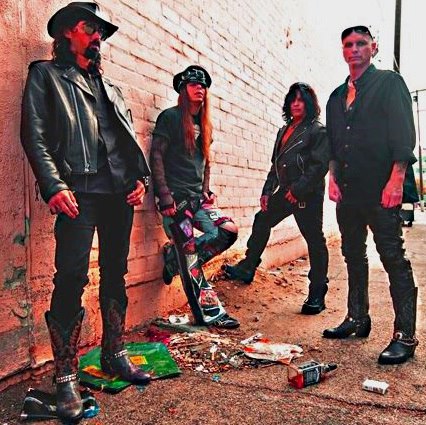 The Trash Cowboys first tore up the Sunset Strip (and themselves) in the mid-1980s, drawing comparisons to the sleazier, yet more street-savvy bands who embraced glam, punk rock and plenty of chemicals.

Groups like Hanoi Rocks had their toxic guitarist, Nasty Suicide, and dirty drummer, Gyp Casino; while the New York Dolls had their legendary junk-rocker, Johnny Thunders, who at 38 was found dead in the fetal position inside his ransacked apartment.

The Trash Cowboys were working hard to keep up with these dubious derelicts. They were living the rock ‘n’ roll “lifestyle” and playing the hottest Hollywood venues of the time: Whisky A Go Go, The Roxy Theatre and Gazzarri’s.

Well, since then, the self-professed “sleaze rockers” got a little off-track.

Decades later, the Trash Cowboys have a second chance at notoriety beginning with a reunion show they played at the Viper Room on Thursday night.

The Trash Cowboys, despite headlining on the Strip in the 80s and producing chorus-heavy singalongs that earned them Guns ‘N’ Roses comparisons, never quite made the mainstream.

Now they are forging a comeback with a new album, reality show and tour.

“We get to play some amazing music that kinda got overlooked. Plus we got some new stuff too,” said drummer Joey “Jo Jo” Durant. “We’re introducing the Hollywood rock scene to people who just never knew what it was really like.”

After all these years, how did the group get back on track?

“Back in October we got a record deal and we decided to do a few shows,” Durant said. “Everybody loved it. It’s going to steamroll. We’re bringing the scene back. We’re gonna put the ‘Wood’ back in Hollywood.”

The band’s newest album is a compilation of demo tracks titled “The Good, The Bad, & The Nasty.”

Trash Cowboys hit the studio in May with producer and guitarist Keri Kelli of Alice Cooper fame.

“We’re going to be in the studio in a few weeks to record some new songs, too,” Durant said. “Maybe a little bit heavier. It’s really sleazy stuff.”

Trash Cowboys wrecked themselves on the Strip back when GnR, Poison and Motley Crue were in their heyday.

“We grew up on the streets of Hollywood, in the scene,” Durant said. “Millions of flyers from any band you could think of. I remember walking down the streets, hearing weird sounds coming from the alleys, kids having sex in the streets. We had an apartment behind Rock ‘n’ Roll Denny’s. We turned that place into a madhouse. Some people from another band had an apartment right next to us and we made a tunnel through the wall from our apartment to theirs. We had graffiti on the walls, the carpet and the ceiling.”

Rock ‘n’ Roll Denny’s, despite being another one of the chain’s cheap diners, featured a cross-cut of the rock ‘n’ roll scene in the 80s. It was demolished in 2003.

“It was a landmark, now I think it’s like Aroma Cafe or something,” Durant said. “Those people have no clue what went on in that place. I remember Jack Russell (of Great White) getting arrested in there one time, getting naked ‘cause he was so drunk and the police showed up. Rolling Stone magazine was taking pictures of him with his pants half down.”

So when exactly did it fall apart for the Trash Cowboys?

“That happened in the early 90s,” said Durant, “and I’ll be honest, we were all so fucked up at the time that I really don’t even remember why. I really don’t. We did some shows in Hawaii and when we came back, our original singer, Nicky Sleaze, just disappeared. He took off. We were all really messed up back then. We’ve never even sat and talked about this. We’re just gonna keep playing.”

No doubt we will see them on the bill for 2013’s Sunset Strip Music Festival.

The band also claims to be working on a reality TV show titled “Beyond Hollywood,” featuring actor Edward Furlong, who was recently arrested and charge with a misdemeanor count of battery in WeHo.

It could be a sleazy-good match.

The Trash Cowboys hope to then take the show concept on a national tour.

This time around, the Cowboys hope to prove they’re more than crash-test dummies. They consistently release party anthems that, in our humble opinion, match the intensity of GnR or Motley Crue.